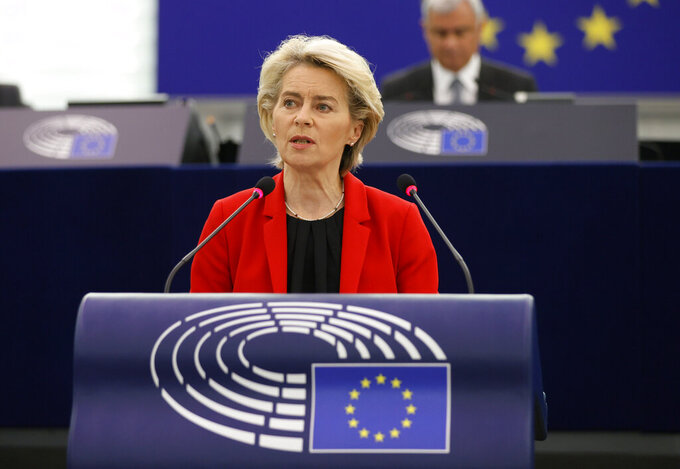 WARSAW, Poland (AP) — Poland is a focus of European attention this week, with Prime Minister Mateusz Morawiecki addressing the European Parliament on Tuesday and leaders at a European Union summit expected later this week to grapple with a legal conundrum created by a recent ruling by Poland's constitutional court.

Some opponents of Poland's nationalist government fear that the court's ruling has put the country on a path to a possible “Polexit,” or a departure from the 27-nation EU like Britain did with Brexit. The government denounces those spreading the idea, which it calls “fake news.” Here is a look at the differing views on the matter — and why Poland's departure from the bloc is unlikely but the government’s friction with EU leaders is real.

Poland's government, which is led by the conservative Law and Justice party, has been in conflict with EU officials in Brussels since it took power in 2015. The dispute is largely over changes to the Polish judicial system which give the ruling party more power over the courts. Polish authorities say they seek to reform a corrupt and inefficient justice system. The European Commission believes the changes erode the country's democratic system of checks and balances.

As the standoff over the judiciary has grown more tense, with the Commission threatening to withhold billions of euros in pandemic recovery funds to Poland over it, ruling party leaders have sometimes compared the EU to the Soviet Union, Poland's occupying power during the Cold War.

Ryszard Terlecki, the party’s deputy leader, said last month that if things don’t go the way Poland likes, “we will have to search for drastic solutions.” Referring to Brexit, he also said: “The British showed that the dictatorship of the Brussels bureaucracy did not suit them and turned around and left."

Marek Suski, another leading party member, said Poland “will fight the Brussels occupier” just as it fought the Nazi and Soviet occupiers in the past. “Brussels sends us overlords who are supposed to bring Poland to order, to put us on our knees, so that we might be a German state, and not a proud state of free Poles,” he declared.

A KEY RULING OVER LAWS

This month Poland's constitutional court challenged the notion that EU law supersedes the laws of its 27 member nations with a ruling saying that some EU laws are incompatible with the nation's own constitution.

That decision — made by a court dominated by ruling party loyalists — gives the Polish government the justification it had sought to ignore directives from the European Union's Court of Justice which it doesn't like — particularly on matters of judicial independence.

The ruling marks another major test for the EU after years of managing its messy divorce from the U.K.

“This ruling calls into question the foundations of the European Union," European Commission president Ursula von der Leyen said during t he EU Parliament's debate Tuesday. “It is a direct challenge to the unity of the European legal order.”

WHAT DOES THE POLISH GOVERNMENT SAY?

Polish leaders say it's absurd to think they want to leave the EU and they accuse the opposition of playing with the idea of “Polexit” for political gain.

Morawiecki, the prime minister, said last week that the opposition “is trying to insinuate that we want to weaken Poland and the European Union by leaving the EU. This is obviously not only fake news, it is even worse. It is simply a lie that is made to weaken the EU.”

Morawiecki repeated his argument on Tuesday, telling the EU parliament that people should not be repeating lies about the Polish government seeking Polexit. He said that “88% of Poles are in favor of EU membership and half of those are our voters.”

COULD EXPULSION HAPPEN FOR POLAND?

The EU has no legal mechanism to expel a member. That means for Polexit to happen, it would have to be triggered by Warsaw. At the moment, the idea seems farfetched, because EU membership in Poland is extremely popular, with surveys showing more than 80% of Poles favor being in the bloc.

When Poland entered the EU in 2004, Poles won new freedoms to travel and work across the EU and a dramatic economic transformation was set in motion that has benefited millions.

Yet some Poles still fear that could change. They worry that if new EU funds are withheld from Poland over rule of law disputes, Poles might eventually come to feel that it's no longer in their benefit to belong to the bloc.

Some simply fear a political accident along the lines of what happened with Britain's departure from the EU. The former British prime minister who called for a referendum on EU membership, David Cameron, had sought to have the country remain in the bloc. He called for the vote to settle the matter, believing Britons would vote to stay. A majority in 2016 did not, and Cameron quickly resigned.