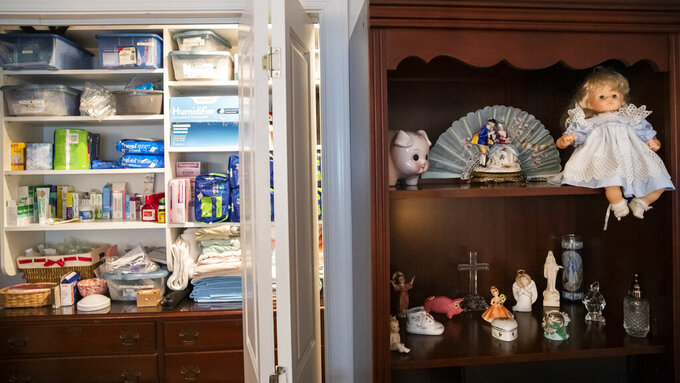 NEW ORLEANS (AP) — It was four days after Hurricane Ida, and Grace Hollins worried her son couldn’t take one more day in the heat.

Carl, 28, has severe intellectual and developmental disabilities. His seizures are aggravated by the heat, and Hollins had just one syringe of diazepam left to treat them. Adult diapers, usually delivered at the first of the month, were running low. Ida had broken a window and torn a hole through her roof in New Orleans’ St. Roch neighborhood, and mosquitoes were coming in. She didn’t know where to turn.

In the aftermath of a hurricane, going without power is difficult. But for people with disabilities and their families, the temporary discomfort can threaten their health and life. At the same time, evacuation can be almost impossible for some, whether it’s due to a lack of money, transportation or few shelter options for people who need a lot of equipment or special conditions to survive.

Ida exposed cracks in Louisiana’s special needs response and how the state addresses situations where extended loss of power or other slow-burning consequences can have devastating consequences. Despite a regular stream of natural disasters in Louisiana, each hurricane uncovers flaws in the system. Systems that are in place, such as special needs registries, do little to address deteriorating situations once power is out and the conditions are unlivable.

“They have to have some type of plan, service for them — period,” said Deatra Hollins, Carl Hollins’ cousin and a licensed practical nurse who was trying to help from afar after evacuating her own family. “They were forgotten.”

New Orleans and other parishes have lists of residents with special needs. Deatra Hollins added her cousin to the registry right after Ida and tried to get him and his mother to a shelter, but she didn’t get a call back until five days later. The call operator apologized and said the special needs shelters were full of nursing home patients who had been rescued from an evacuation warehouse in Independence.

According to the state, the medical needs shelter in Alexandria was never full and no one was turned away. But Deatra Hollins heard otherwise, and she didn’t want her cousin and aunt to risk a long trip if there was not room.

Entergy Corp. also has a registry that residents can join through a doctor’s note. But it’s unclear whether it’s used to prioritize power restoration. Entergy did not answer questions about how many people are on the registry and how the company uses it.

“Here’s the bottom line,” Entergy representative David Freese wrote in an email. “While our crews are dedicated to restoring power, customers should have a backup system and plan in place for power outages or other emergencies.”

The state checks in on families through a waiver service program that provides in-home and community care based on need. Each family that receives a waiver also has a support coordinator, who ensures the family has an evacuation plan. There are about 630 coordinators for about 20,000 people with disabilities severe enough to require assistance with daily living, said Julie Foster Hagan, assistant Health secretary for the Office for Citizens with Developmental Disabilities.

“With a storm of the magnitude of Ida, cell phone service and contact was made difficult,” Hagan said. In those cases, the state relies on volunteers from the Louisiana Emergency Management Disability and Aging Coalition to help those in need. Help for people with disabilities in emergencies often comes through a patchwork of neighbors, relatives with sufficient resources and other families with disabled relatives.

But even the best-laid plans by those most familiar with the medical system and hurricanes can go awry, officials acknowledged. Coordinators are supposed to reach out before and after the storm, but they’re often hampered by storm damage themselves. Officials said the coordinators reached out before Ida, but many families said communication was spotty after the storm.

In far east Livingston Parish, 67-year-old Ruth Kennedy thought she had a good plan for her 53-year-old foster sister, Regina, who needs help dressing, bathing and walking. Regina’s support coordinator checked in before the storm and confirmed they had a generator and 100 gallons of fuel to share with a nearby relative.

But as the days without power stretched on, the fuel ran low. Regina’s in-home caregivers were trapped in their own homes or had left town. Kennedy decided to evacuate with her sister. But she worries for people who don’t have the money or ability to leave.

“I have the resources to get up and drive to Birmingham,” said Kennedy, former Medicaid director for the Louisiana Department of Health. “But look at people who may not have those kinds of resources. What did they go through?”

Sue Roeskey, 61, who lives in Metairie, has been through her share of hurricanes. Her 31-year-old daughter, Lauren, who is nonverbal with cerebral palsy, was airlifted out of Tulane Medical Center’s New Orleans campus after Hurricane Katrina in 2005. A few years later, she tried evacuating to Houston to get out of a storm’s path. But the drive was 17 hours, an excruciating amount of time for Lauren to be strapped into the van.

Now it’s even harder, as Lauren is bigger and uses a bed lift, shower chair and various devices such as a feeding tube and suction machine that require electricity and cabinets full of medication and supplies. If she goes more than six weeks without refilling a special implant in her abdomen with medication — which not every hospital can fulfill — she has 24 hours before she could die.

“All those things people take for granted — ‘Oh I can just sweat it out for a few days’ — that’s not an option for Lauren,” Roesky said. When Lauren starts to sweat and gets dehydrated, she can deteriorate quickly.

During Ida, Lauren and her mother stayed in their home. But two days later, still without power, Lauren wasn’t doing well in the heat. The caregivers provided through the state’s waiver program had also evacuated, and the around-the-clock job fell to Roesky.

Eventually, another relative brought a generator, window air conditioning unit and gasoline from Lafayette. Her brother in Texas traveled to the halfway point to hand off more fuel.

“We got lucky this time,” Roesky said. “We’ve talked about getting a whole house generator, but that’s a lot of money.”

Roesky has asked if the state would allow money typically available for home modifications like wheelchair ramps to be put toward a more permanent power solution, but she was told no.

The state has gotten a lot of inquiries for money for more stable power sources for people like Lauren, said Hagan, the assistant Health secretary. “It has been something that we’ve escalated and tried to look at, but it’s not something we can use Medicaid dollars for,” she said.

Every family with a disability is different, says Karen Scallan, a Medicaid adviser who helps families navigate the mountains of paperwork and hoops to jump through when they are seeking services. One-size-fits-all evacuation plans don’t work for people with such differing situations.

Scallan and her 20-year-old son, who has Down syndrome and autism, initially evacuated to Shreveport. They stayed in a hotel with her elderly mother and sister, four of them in one room. It was tight, but a shelter doesn’t work for a lot of autistic people, Scallan said. They are overwhelmed by other people, the noises and smells. Scallan also can’t stay in her home in St. Charles Parish, where there is no running water, sewerage or internet.

“When all those things are disrupted, it creates tremendous anxiety in them, which makes it hard to deal with the day-to-day things coming up: trying to find gas for the generator, or food or water,” Scallan said.

Until they get services back in St. Charles, they’re splitting a condominium in Gulf Shores, Alabama, with a friend. They can stay until October, but it will be a big expense. Scallan estimated she’s spent up to $4,000 so far.

People who live paycheck to paycheck have it worse, she said. Disabled people who aren’t in the waiver system don’t get checked on; for them, it takes an emergency before someone might notice.

From a relative’s home in Alabama, Kathy Dwyer was scouring social media posts across Louisiana after Ida, looking for people like Grace Hollins. The volunteer chair of Louisiana’s State Advisory Committee for Developmental Disabilities, Dwyer had evacuated from Metairie with her 44-year-old daughter, Jen, who is also disabled. And she knew there would be people who needed help.

Dwyer came across a Facebook post from Deatra Hollins, who said she and Grace Hollins were at the end of their rope after making about 100 telephone calls for help for her disabled cousin. They called 911, their church, the Federal Emergency Management Agency, the New Orleans Special Needs Registry and the Cajun Navy, but no one could find somewhere for them to go.

Finally, on Sept. 6, eight days after the storm, they got out of New Orleans. Dwyer called the Office of Developmental Disabilities, where an employee knew of a nonprofit that could donate two bus tickets to Atlanta.

“I’m just trying to keep my head above water and not think too much about too much,” Grace Hollins said. She hasn’t been reimbursed for the money she spent on their hotel room. Her FEMA application, which Deatra Hollins is helping her complete, hasn’t been approved. She said she gets by on about $300 per month after her rent and electricity is paid. Last week, she spent $60 on adult diapers. She’s replacing all the food that went bad in the house during the storm’s power outage, and buying Pedialyte and special nutrition drinks for her son Carl.

“I’m doing everything,” said Hollins, as she walked back from the corner store in the rain on Friday. “And you think I’m not broken?”