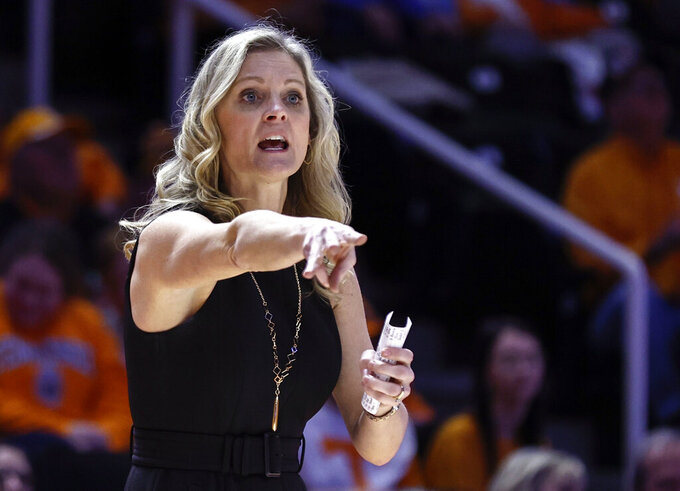 Wade Payne, ASSOCIATED PRESS
FILE - Tennessee head coach Kellie Harper yells to her players during the second half of an NCAA college basketball game against Arkansas, Jan. 31, 2022, in Knoxville, Tenn. The Lady Vols also haven't been ranked since late November despite starting the season ranked fifth. They can take a step toward ending a couple of those Thursday, Jan. 26, 2023 when No. 5 UConn visits for the latest game in the rivalry between women’s basketball’s most storied programs. (AP Photo/Wade Payne, File) 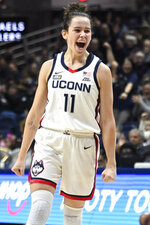 Tennessee hasn’t been to a Final Four since 2008 and last beat UConn a year earlier when Pat Summitt won her seventh of eight national championships.

The Lady Vols also haven’t been ranked since late November despite starting the season at No. 5. They can take a step toward ending a couple of those skids Thursday night when No. 5 UConn visits for the latest game in the rivalry between women’s basketball’s most storied programs. At least 12,000 fans will be in the stands, and ESPN’s College Game Day also will be on hand.

Tennessee coach Kellie Harper said she's excited at the opportunity for a great atmosphere to showcase women's basketball at an elite level.

“I know our team is excited,” Harper said. "Who would be right? And, you know, everybody wants to play in that kind of environment with that atmosphere and a lot of fans in the stands.”

Geno Auriemma is no stranger to big games in Knoxville, Tennessee.

“The size factor you know, the athleticism factor, the crowd factor that’s going to be down there, the circus-like atmosphere that surrounds a Connecticut-Tennessee game,” he said. “Even though it’s not quite at the level, you know, it’s not the Beatles.”

No, but the two women's programs with the most national championships attract attention from casual fans whenever they play. Summitt set the standard until Auriemma and UConn passed that mark and kept winning, adding an 11th title overall and fourth straight in 2016.

Tennessee (16-6) has won nine straight games since a seven-point loss at then-No. 2 Stanford. That winning streak hasn't been good enough to push the Lady Vols back into the Top 25 where they started the season. Harper was mixing in a handful of new players from the transfer portal and recruiting when Tennessee struggled early on.

Then she lost 6-foot-6 center Tamari Key for the season because of blood clots in early December — before that loss to Stanford.

Harper sees her Lady Vols finally playing much closer to what she expects after that their early eye-opener.

“I’m not going to say we’ve arrived and we’re as good as we can possibly be," Harper said. “We want to keep working every day to get better. I think the early games really challenged us and gave the adversity.”

Her Lady Vols will face a depleted UConn team with only eight players available.

Paige Bueckers and freshman Ice Brady are out for the season with injured knees. Azzi Fudd (knee) and Caroline Ducharme (concussion) are both out indefinately. Ayanna Patterson returned from a concussion for their rout of DePaul on Monday night.

Auriemma said they will be more taxed by the Lady Vols' depth, athleticism and size.

“They’re a really, really good team,” Auriemma said. “They were struggling to find their way early on, and they seem to have put together. We have to handle the whole environment. Not an easy place to play, obviously. But our kids are excited about it. They’re looking forward to it.”

The Lady Vols also will have a home advantage they didn't when UConn lasted visited early in the pandemic when just 3,553 were in the stands for the Huskies' 67-61 win.

UConn guard Nika Mühl didn't play then. She said she wasn't on the same page as Auriemma during a bad stretch at practice and wound up benched that game.

“I was very mad, very disappointed,” Mühl said. “So I’m definitely excited to go and just, you know, step up the court on that court for the first time. It’s gonna be fun.”

This is the fourth straight season these teams have played, and Harper favors continuing this rivalry — even with UConn having won all first three since the renewal. She sees both fan bases excited.

“And obviously, there’s just a lot of extra noise, extra hype prior to the game with this matchup,” Harper said. "I think you can see the national attention that it has drawn. ... The buildup has been probably really good for women’s basketball and getting people talking about these two programs.”