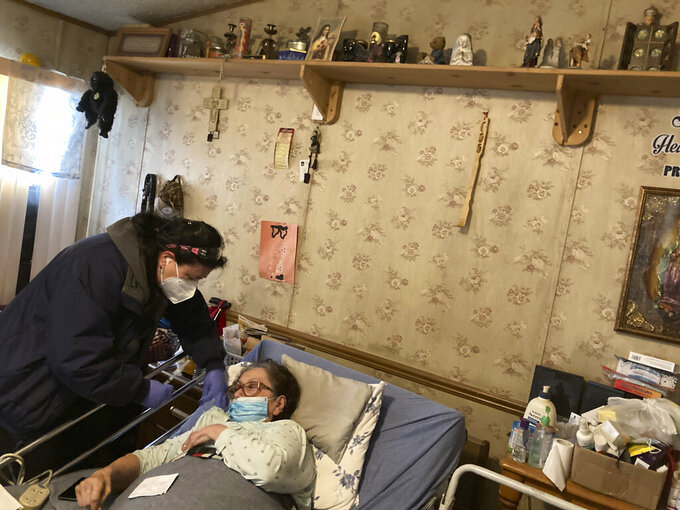 Morgan Lee, ASSOCIATED PRESS
Mora County Ambulance Service Director Brenda Casados makes a home visit to administer a COVID-19 vaccine shot to 71-year-old Amalia Montoya in Cleveland, N.M., on Tuesday, April 20, 2021. New Mexico is among the states with the highest rates of vaccination for COVID-19 and efforts are underway to respond to skepticism and misinformation about the effectiveness and risks of immunization. First Lady Jill Biden was kicking off of a visit to the U.S. Southwest with a tour of a vaccination clinic in Albuquerque. (AP Photo/Morgan Lee)

ALBUQUERQUE, N.M. (AP) — Top state health officials said Wednesday that New Mexico is on track to meet its goal of a 60% vaccination rate for people 16 and older by the end of June that would allow the economy to reopen fully, amid new strategies aimed at breaking through hesitancy toward immunization.

About 57% of eligible New Mexico residents have received at least a first vaccine shot.

“We do think it’s going to be harder to get the remaining group to be vaccinated,” Human services Secretary David Scrase said at an online news conference. “I think it’s eminently doable as long as the counties keep up the pace” of vaccines.

Rates of full vaccination run the gamut from about 23% in Roosevelt County, in southeastern New Mexico, to nearly 64% in McKinley County on the Arizona state line, an area that was hit especially hard by the virus last year.

Scrase said vaccine supplies are no obstacle as the federal pipeline for doses outstrips demand. The state hopes to use at least 70% of the weekly federal allotment.

State health authorities are offering vaccination clinics at small venues such as schools and churches in efforts to increase immunization rates. They are urging doctors to brief patients on the vaccine, and asking people who haven't been vaccinated to reach out to trusted sources of information.

State health officials say infections in New Mexico are now dominated by highly contagious variants of COVID-19, including ones that were first detected in the United Kingdom and California. Health Secretary Tracie Collins says that's all the more reason or people to get a vaccine shot to lower the chances of infection and virus-related hospitalization or death.

Separately, the University of New Mexico may require students and staff to be vaccinated for COVID-19 to return to campus in the fall.

The university on Monday posted a proposed vaccine requirement along with a statement on its plans to return to in-person instruction and regular campus activities.

The university said it was seeking comment on the proposed requirement.

The requirement would apply to students and staff “unless they have been granted a reasonable accommodation," the proposal said.

In Las Cruces, New Mexico State University officials encourage everyone to get the vaccine but haven't decided to require students and employees to be vaccinated, university spokesman Justin Bannister told the Albuquerque Journal.

Numerous other colleges and universities nationwide have announced vaccination requirements.