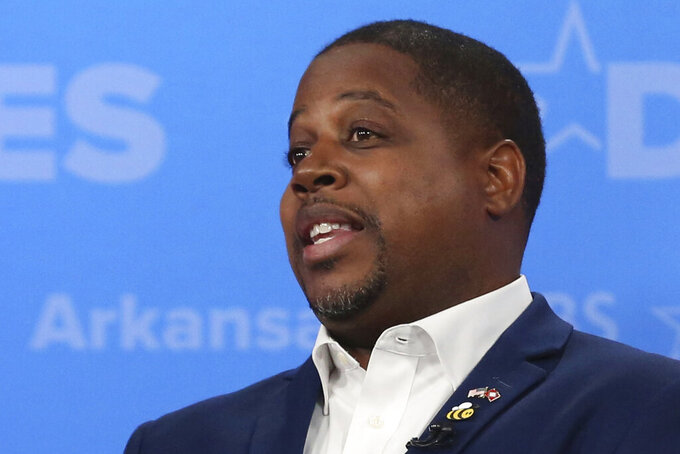 Sanders shattered state fundraising records with her campaign, which focused primarily on national issues. Sanders, the daughter of former Gov. Mike Huckabee, regularly promised to use the office to fight President Joe Biden and the “radical left.”

In her acceptance speech on Tuesday night, however, Sanders didn't mention either the former or current president and instead shared stories about supporters she met during her campaign bid.

“This election is about taking Arkansas to the top," Sanders said. “I know that Arkansas can be first, and I'm committed to being the leader who takes us there."

Stan Hall, a retired postal worker, said he voted for Sanders though he wanted her to talk more about state issues rather than criticizing Biden or talking up her time working for Trump.

“I think, just state your own feelings on what you’re going to try and do and improve things,” Hall said. “Everybody knows who she was and what she did, so to keep beating that drum was a little bit much for me.”

Sanders succeeds Republican Gov. Asa Hutchinson, who is leaving office in January due to term limits. Hutchinson, who endorsed Sanders’ bid, is considering running for president in 2024 and has frequently split with Trump.

Trump publicly encouraged Sanders to run for governor when she left the White House in 2019 to return to Arkansas.

But Sanders was a known figure in the state long before Trump. She appeared in ads for her father and worked on his campaigns. She managed Sen. John Boozman’s 2010 election and worked as an adviser to Sen. Tom Cotton’s in 2014.

Sanders briefly left the campaign trail in September after undergoing surgery for thyroid cancer. Her doctor said Sanders was cancer free after the surgery.

During Sanders’ nearly two-year tenure at the White House, she scaled back daily televised briefings after repeatedly sparring with reporters who aggressively questioned her. She faced questions about her credibility, particularly after special counsel Robert Mueller’s report revealed that Sanders admitted making an unfounded claim to reporters about FBI agents’ reaction to director James Comey’s firing. But she also earned reporters’ respect working behind the scenes to develop relationships with the media.

Sanders embraced Trump’s rhetoric during her bid for governor and adopted many of his favorite targets, including critical race theory and the national news media. But she’s avoided criticizing Hutchinson, even after the former president labeled Hutchinson a RINO — Republican In Name Only — for vetoing an anti-transgender law.

Sanders said she would have signed that measure — a ban on gender affirming care for minors — into law.

She’s stopped short of agreeing with Trump that his loss in the 2020 presidential election was stolen, though she’s said the former president has the right to make that claim.

Jones, an ordained Baptist minister and nuclear engineer, had presented himself to voters as a more unifying figure than Sanders. He launched his campaign with a video that went viral where he talked about his family’s history in the state. He ran on promises to expand preschool access and broadband.

Speaking to supporters on Tuesday night, Jones did not concede the race.

“We're going to count every last vote in this race," Jones said. “Why? Because Arkansas deserves it and Arkansas is worth it."

Kathy Balkman, a retired educator in Little Rock, said she voted for Jones and cited Sanders’ time as press secretary as a reason.

“She was very confrontational, and I don’t see that she has any skills to not work confrontationally in our state,” said Balkman, a Democrat who said she’s voted previously for the state’s current Republican governor. ___