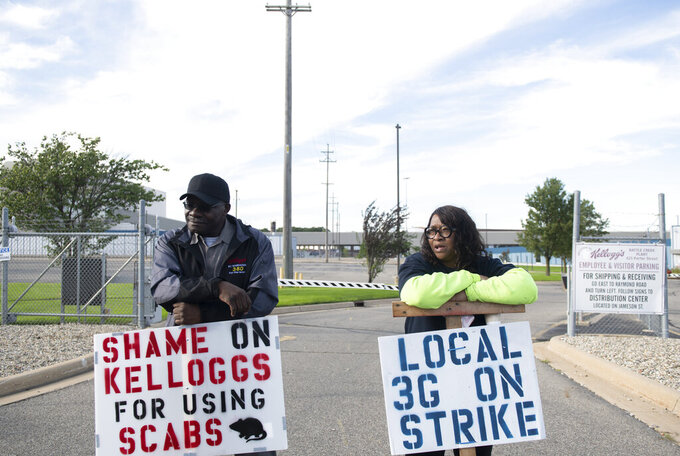 Nicole Hester, ASSOCIATED PRESS
Larry Gamble, who has worked at the Kellogg plant for 13 years, and Sharnita Childress, who has worked at the plant for 8 years, picket with other union workers outside of the plant in Battle Creek, Mich. on Tuesday, Oct. 19, 2021. Around 1,400 union workers from Michigan, Tennessee, Pennsylvania and Nebraska have been on strike for the past two weeks. (Nicole Hester/The Grand Rapids Press via AP)

OMAHA, Neb. (AP) — The Kellogg Co. is trying to persuade its 1,400 striking cereal-making workers to return to the bargaining table.

The Battle Creek, Michigan-based company said Monday that it sent a message to the Bakery, Confectionery, Tobacco Workers and Grain Millers International Union that represents those workers offering to resume contract talks. The workers have been on strike since Oct. 5.

"We have a responsibility to these employees — which is to engage in good faith bargaining toward a replacement agreement that gets them back to work,” the company said.

In its statement, the company hinted that it might be willing to discuss proposals that would address its current two-tiered system that gives fewer benefits and less pay to newer workers, which has been a sticking point for the union. But Kellogg's didn't elaborate except to say it would consider “proposals that would preserve a pathway for transitionals to legacy wages and benefits.”

Dan Osborn, president of the union's local chapter in Omaha, Nebraska, said he believes the union is ready to return to the bargaining table if Kellogg's is serious about being willing to negotiate on that two-tiered wage system, but the company didn't immediately respond to questions the union sent Monday in response to the company's offer.

“I'm hoping we can get back to the table and get a contract,” Osborn said. “People just want to go back to work.”

The strike covers four plants that make all the company's well-known brands of cereal, including Fruit Loops and Frosted Flakes. The plants are in Battle Creek; Omaha; Lancaster, Pennsylvania; and Memphis, Tennessee. The company said it has resumed production at all four cereal plants with outside workers and salaried employees, so it’s not clear how the strike will affect cereal supplies.

The workers at Kellogg's and other companies where strikes have happened this year feel emboldened to act now because of ongoing labor shortages. Kellogg's workers also say many of them have been putting in 12-hour shifts on a routine basis to keep the plants operating during the coronavirus pandemic.

Earlier this summer, 600 Frito-Lay workers walked off the job in Topeka, Kansas, and 1,000 workers at five Nabisco plants across the country went on strike.

In another industry, more than 10,000 Deere Co. workers also went on strike earlier this month in search of better pay and benefits. Contract talks have resumed between Deere and the United Auto Workers union, but workers at 14 Deere plants have remained on strike since Oct. 14.