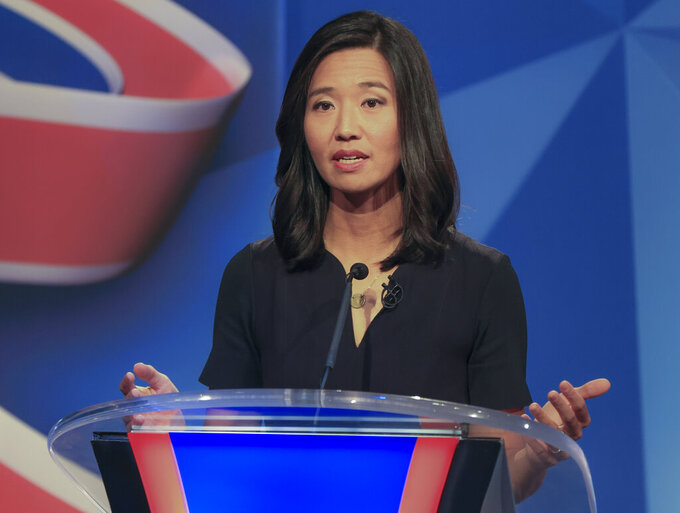 BOSTON (AP) — Boston City Councilors Annissa Essaibi George and Michelle Wu clashed on everything from rent control to public transportation as they faced off Monday in a feisty, final televised debate of Boston’s historic mayoral contest.

Essaibi George repeatedly faulted Wu on a range of topics, from Wu’s support of rent stabilization to her call for a fare-free public transportation system.

Wu, who has maintained a lead in a series of recent polls, defended those pledges while largely agreeing with Essaibi George on a handful of other issues, including the need for better, more affordable child care.

The contest will make history with the winner — whether Wu or Essaibi George — becoming the first woman and first person of color to be elected mayor in the city’s long history. Until now, Boston has only elected white men to the top political office.

One flash point during the hourlong debate came during a discussion on the best way to respond to a tent city near the corner of Massachusetts Avenue and Melnea Cass Boulevard that’s become the region’s most visible symbol of the opioid epidemic, with many residents of the encampment struggling with addiction. On Monday, city officials began clearing the sprawling homeless camp.

Essaibi George has called on the city to rebuild a bridge to a city-owned island to re-open a substance use recovery center there. The bridge to Long Island was demolished in 2015 after it was deemed unsafe.

The neighboring city of Quincy has fought efforts to rebuild the bridge.

“I’m not going to walk away from a battle with Quincy,” Essaibi George said. “It makes me wildly crazy that we have not helped people in crisis.”

Wu said rebuilding the bridge could take years and costs hundreds of millions — money she said would be better spent helping those struggling with addiction and homelessness immediately. She has suggested creating a ferry service to the island and rehabbing city-owned properties to serve to offer housing and treatment.

She said the city has to approach the problem through a public health lens.

“We cannot wait to take immediate action,” she said.

Both candidates said they would stick with a plan requiring all city workers be vaccinated and would continue a mask mandate in schools. They both also said they support pre-kindergarten education.

The two clashed on how best to address Boston's soaring housing costs.

“Across the city in every neighborhood it is clear that housing in on people’s minds,” she said. “The status quo isn’t working.”

The two also disagreed on the best way to address the city’s transportation and traffic woes.

Essaibi George again criticized one of Wu’s centerpiece proposals — a “fare free” public transit system. Wu said the proposal would help the city’s economy, address climate change and help those who take the bus or subway to school or work.

Essaibi George said the cost of the proposal is staggering and would fall on the backs of Boston residents.

The hour-long debate came as Bostonians have already begun casting their ballots at early voting locations across the city.

The 36-year-old Wu, whose parents immigrated to the U.S. from Taiwan, grew up in Chicago and moved to Boston to attend Harvard University and Harvard Law School. Essaibi George, 47, a lifelong Boston resident, describes herself as a first-generation Arab-Polish American.

Walsh was replaced on an acting basis by Kim Janey, who was sworn in March 24 as Boston’s first female and first Black mayor. Janey ran for mayor but failed to be one of the two top vote-getters during last month’s preliminary election.

The winning candidate will be sworn in Nov. 16, just two weeks after the election.