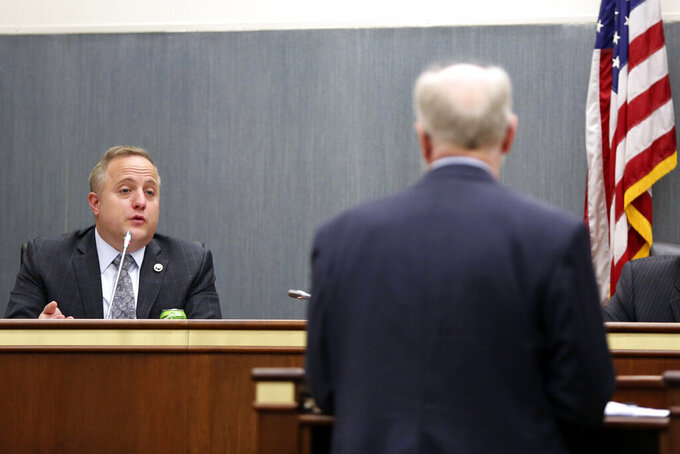 COLUMBIA, S.C. (AP) — A small group of South Carolina House members kept firing squads in a bill meant to restart executions in a state that hasn't put an inmate to death in nearly 10 years.

South Carolina no longer can obtain the lethal injection drugs and even through the state kept its electric chair, condemned inmates cannot be executed unless they explicitly choose electrocution, meaning there has been a hold on executions since the last prisoner was killed in May 2011.

The Senate passed a bill last month that would make the electric chair the execution method if a prisoner does not choose and lethal injection is not available. But it also added a new choice — death by firing squad.

A House subcommittee approved the Senate bill on Wednesday, sending it to the full House Judiciary committee.

Prison officials testified that the need for the change is getting more urgent. Two of the state's 37 death row inmates are out of appeals but can't be put to death and a third will likely join that list before the end of the month.

Solicitor Rick Hubbard, who prosecuted one of the only two men sentenced to death in South Carolina in the past 10 years, told lawmakers it isn't fair to the families of crime victims and the public overall to halt executions when they are still legal.

“The way it appears to the public is a man who is rightfully convicted and rightfully and appropriately sentenced to death can at that moment of being executed veto our state sentence and choose a form of execution that does not exist,” said Hubbard, who sent Timothy Jones to death row for killing his five children as revenge against his ex-wife in 2014 in Lexington County.

The House has a similar bill on that chamber’s floor that doesn’t include firing squads. The Senate bill would give representatives a choice. Gov. Henry McMaster said he will sign a bill with or without firing squads. There are just three weeks left in the General Assembly's 2021 regular session.

Much of Wednesday's hearing dealt with technical parts of the bill such as whether inmates need to sign a form choosing how they want to die and whether that forms needs witnesses or how a prisoner choosing not to decide at all should be handled if the firing squad is added.

Just one person spoke out against the bill. Frank Knaack, executive director of the state chapter of the American Civil Liberties Union, argued South Carolina needs to get rid of the death penalty because innocent men have been sentenced to death before and the state has never reviewed if racial bias means Blacks are more likely to end up on death row.

“It is inappropriate we are discussing the method of execution when we have a death penalty system that is racist, arbitrary and error-prone," Knaack said.

South Carolina still uses the electric chair first powered up in 1912 after taking over the death penalty from counties, which usually used hanging.

It is just one of nine states that maintains an electric chair. Only three states — Utah, Oklahoma and Mississippi — currently allow a firing squad, according to the Death Penalty Information Center.

A lawyer in the state Attorney General's Office told lawmakers that a firing squad has never been found unconstitutional and there are studies that inmates die more quickly and with less pain than other execution methods.

"A victim of murder was given no choice in the manner of their death — being shot, stabbed, strangled, drowned, burned, smothered, buried alive, bludgeoned to death, etcetera. No choice there," said Hudson, executive director of the South Carolina Victim Assistance Network.