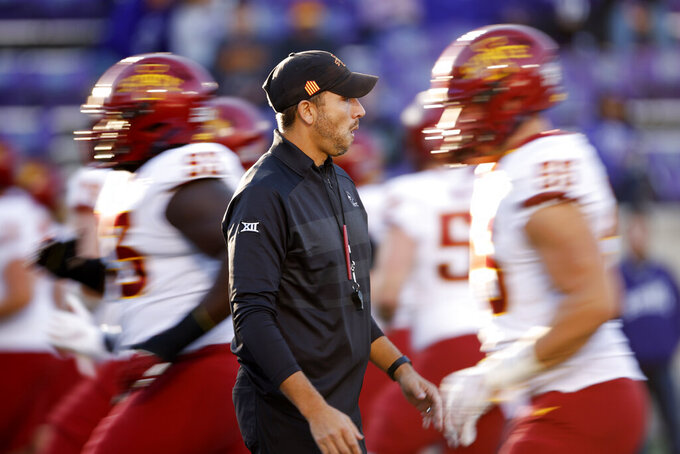 MANHATTAN, Kan. (AP) — Breece Hall rushed for 197 yards and two touchdowns and Brock Purdy was an efficient 22-of-25 for 208 yards and a score as Iowa State downed Kansas State 33-20 Saturday night.

The Cyclones gained 210 yards on the ground and 208 yards through the air.

“So much credit goes to our quarterback tonight. The way he played with poise, I really thought he did a phenomenal job of distributing the football.”

The Wildcats had won 15 of the last 16 games in Manhattan. The teams split the last four meetings in the series, with each team winning two home games. Prior to that, K-State had won 10 straight games in the series.

K-State quarterback Skylar Thompson was 15-of-23 for 206 yards and two touchdowns and one interception.

Hall has now rushed for a touchdown in 18 straight games, a Big 12 record and the fifth longest streak in FBS since 1996.

Hall rushed 75 yards for a touchdown on the opening play of the game, finding a hole on the right side of the offensive line and racing untouched until the 10-yard line, where he eluded a defender diving for his feet.

“It was blocked perfectly,” Hall said. “I didn’t really have to do much but find a hole and run. I knew it was going to be a big run, because the crowd was real loud but it got quiet suddenly. I knew I would score the touchdown.”

The touchdown came after Iowa State won the coin flip and chose to receive.

“We were just trying to gain some momentum,” Campbell said. “This is such a great place to play college football. I thought maybe the one thing that could swing it for us was to put together a positive drive on the first drive. Obviously, a great play by Breece.”

After K-State converted a second-and-23 for a first down, Thompson found Phillip Brooks for a 40-yard touchdown pass to get the Cats on the board.

Kansas State missed a chance to tie the score on a 33-yard field goal when Taiten Winkel missed wide right. Iowa State responded with a 14-play, 80-yard drive capped by Hall’s 1-yard run. Mevis hit a 41-yard field goal as time expired to take a 20-7 lead to the half.

Iowa State started the second half with an 18-play, 93-yard drive that took more than 10 minutes off the clock. Purdy hit Sean Shaw in the front corner of the end zone for an 11-yard touchdown to close the drive.

“Kansas State brought the heat, but the O-line did a great job,” Purdy said. “I think we were really prepared for (K-State’s game plan), and the guys up front went to work.

“At the end (of that drive), I thought, ‘That’s pretty good for us, just doing our job.’ It just came down to converting on third down.”

Thompson punched it in from the 1-yard line in the fourth quarter to cut it to 27-13 and Mevis connected on another 41-yard field goal to extend the lead to 30-13.

K-State followed with an 11-play, 75-yard drive capped by Thompson’s nine-yard scoring pass to Malik Knowles. Mevis then hit his fourth field goal, this one from 40 yards.

Iowa State: The Cyclones’ offensive line gave Purdy plenty of time all day. He was not sacked and threw only three incompletions. With time to pick the best choice, the Cyclones were able to convert 9-of-15 third downs and control the ball for 33:45.

Kansas State: The Wildcats have to improve their tackling. They allowed Iowa State’s top four receivers 104 yards after the catch, half of Iowa State’s passing yards gained.