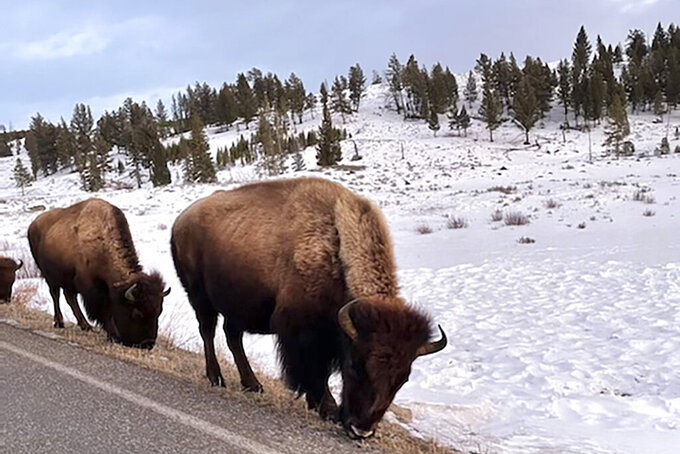 Helena Brown, ASSOCIATED PRESS
Bison graze along the Grand Loop Road in Yellowstone National Park, Friday, Feb. 18, 2022, near Mammoth Hot Springs, Wyo. Park officials captured 37 bison that were migrating outside the park and sent most to slaughter under a program that seeks to prevent the animals from spreading disease to cattle in neighboring Montana, a park official said Thursday, Feb. 24, 2022. (Helena Brown via AP)

BOZEMAN, Mont. (AP) — Forty-nine Yellowstone National Park bison were shipped to slaughter, killed by hunters or captured for relocation this winter — well short of officials' goal to remove 600 to 900 of the animals.

The park has about 5,000 bison, also known as buffalo. The herds are culled annually under a federal-state agreement that's meant to keep their numbers from growing and to prevent bison from spreading the disease brucellosis to cattle in Montana.

The program depends on large numbers of bison migrating outside the park to their winter feeding grounds in Montana. But this year's migration was not very large and many animals stayed in Yellowstone.

Twenty-seven bison were captured leaving the park and sent to slaughter, and 10 were captured and put into quarantine for future relocation, the Bozeman Daily Chronicle reported.

Officials end shipments of bison to slaughter by early spring to avoid capturing animals in late-term pregnancy. That means there's only a window of about five weeks to reach the culling objectives, which have often been missed.

The slaughter program has long been strongly criticized by wildlife advocates, Native Americans and some members of Congress. Yellowstone officials have said they want a new bison management plan with less emphasis on shipping animals to slaughter.