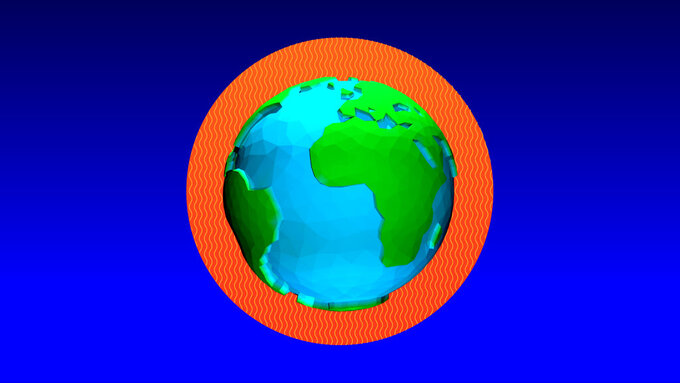 Addressing climate change — a now ubiquitous term for the warming of the planet caused by humans emitting carbon dioxide and methane from coal, oil and natural gas into the atmosphere — is becoming exponentially more pressing, with the language of scientists, officials and activists becoming more serious with every passing year.

The most recent report by the world’s top body of climate scientists gave a damning assessment of where the world is headed if more isn't done to curb global warming. Already, more extreme weather events are happening across the globe, from longer, more intense and more frequent droughts and heat waves to devastating floods and wetter hurricanes, attributed at least in part to climate change.

How the planet got here, the current and future effects of climate change, and what to do next, are all questions that experts have been researching for decades.

EDITOR’S NOTE: This story is part of an ongoing series answering some of the most fundamental questions around climate change, the science behind it, the effects of a warming planet and how the world is addressing it.

There may be an uptick in climate-related policy, discussions and activism, but the science isn't all that new.

Scientists in the early 1800s began to recognize that some gasses and water vapor could trap heat in the atmosphere. And for the last sixty years, researchers could definitively measure that carbon dioxide levels in the atmosphere were rising, thanks to a CO2-monitoring station at Mauna Loa in Hawaii.

Meteorologists in the middle of the twentieth century also started to understand the climate as a “system that is dynamic, constantly changing, and perhaps also vulnerable to external forcing and alteration,” said Martin Mahony, a lecturer of human geography at the University of East Anglia who studies the history of climate science and its interactions with politics.

Add to that the knowledge that CO2 levels were going up and scientists started realizing that this could be a major issue.

“In the 1960s, you start getting conferences and workshops on ‘the CO2 problem’ ... bringing meteorologists together with the geophysicists and other folks to think through the implications of this in very abstract, theoretical terms,” Mahony said.

But it wasn't long before this theoretical puzzle became a serious concern.

By the late eighties, the Intergovernmental Panel on Climate Change was set up to assess how much the climate is warming and if humans have anything to do with it.

Ever since its first report in 1990, the link between fossil fuels and global warming was clear. Coal, oil and natural gas for electricity, heating, transport, industries like steel and cement-making, and the gasses from agriculture and refrigerants, are burning up the planet.

Scientists say that average global temperatures have gone up by around 1.1 degrees Celsius (2 degrees Fahrenheit) since the middle of the nineteenth century, causing hotter temperature extremes, rising seas and weather disasters, with experts warning that more catastrophic climate events are on the way as the world warms up further.

Those living in the least developed nations or in poorer communities are often the most vulnerable to climate change. Many have called for rich, high-polluting countries, like the U.S. and much of Europe, to pay their share so that developing countries are more resilient to weather extremes and can curb their use of fossil fuels. Known as “loss and damage” in climate negotiations, it's an area that nations have struggled to agree on in recent years.

In a somewhat rare moment of agreement between rich nations and more climate-vulnerable, low-emitting ones, countries at the U.N.'s annual climate conference in Paris in 2015 did agree to limit warming to “well below” 2 degrees Celsius (3.6 Fahrenheit) since pre-industrial times, with the aim of capping the average global temperature rise to 1.5 Celsius (2.7 Fahrenheit).

Alternatives to fossil fuels, like solar and wind energy, need to be scaled up dramatically if the Paris climate goals are to be met, experts say. Newer technologies, like carbon capture or green hydrogen, which are currently too expensive, untested at scale or both, will also have to be deployed to limit warming. Changes in people's personal lives can also make a difference, although the large reductions come from government policies and choices made by giant corporations, rather than individuals.

Although some effects of global warming are locked in, many scientists believe that curbing warming to just a few more tenths of a degree is achievable, but only if drastic action is taken very quickly.