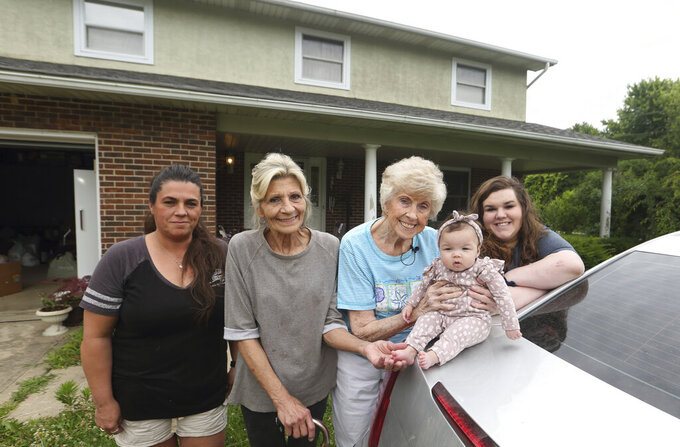 JOHNSTOWN, Ohio (AP) — When President Joe Biden applauded a decision by Intel Corp. to build a $20 billion semiconductor operation on “1,000 empty acres of land” in Ohio, it didn't sit well with Tressie Corsi.

The 85-year-old woman has lived on 7 acres of that land since she and her late husband, Paul, built a house there 50 years ago. They raised four children there and welcomed multiple generations of grandchildren and great-grandchildren, including some who lived right next door.

“You can see it’s not vacant land,” Corsi said on a recent warm summer day as she sat on her porch.

Corsi and more than 50 other homeowners on the Intel site aren't being forcibly removed. Two holding companies working on behalf of Intel have spent millions on offers to homeowners, often well-above market rates. The companies paid Corsi just over $1 million, and Intel is putting her up in a house rent-free before she moves to her new home.

But money was never the issue, Corsi said.

“It was the happiness that we had,” she said. “That’s what really hurts.”

Intel announced the Ohio development in January as part of the company's efforts to alleviate a global shortage of chips powering everything from phones to cars to home appliances. It’s the largest economic development investment in Ohio history.

Construction of two factories, or fabs, is expected to begin this year, with production coming online at the end of 2025. Total investment could top $100 billion over the decade, with six additional factories down the road. The project is expected to create 3,000 company jobs with an average salary of $135,000 and 7,000 construction jobs. Dozens of Intel suppliers will provide more jobs.

Intel says it expects 2,000 of its 3,000 workers to come from Ohio and the Midwest, The Columbus Dispatch reported. They will be trained at the company's Chandler, Arizona, facility in suburban Phoenix for 12-18 months, then sent back to Ohio in time for the new plant's opening. Recruiting is set to begin this fall with job offers coming in the spring.

Backers promote both the project's economic development potential and its national security benefits. The U.S. share of the worldwide chip manufacturing market has declined from 37% in 1990 to 12% today, according to the Semiconductor Industry Association, and shortages have become a potential risk.

Biden has pushed for the passage of the federal CHIPS for America Act, currently stalled in Congress, that would provide billions for semiconductor research and production. The “scope and pace of our expansion in Ohio will depend heavily on funding from the CHIPS Act,” Intel spokesperson Linda Qian said, though there’s no indication the project won’t go forward.

To win the project, Ohio offered Intel roughly $2 billion in incentives, including a 30-year tax break. Intel has outlined $150 million in educational funding aimed at growing the semiconductor industry regionally and nationally.

“If you travel 20 miles east of Columbus, Ohio, you’ll find 1,000 empty acres of land,” Biden said during March's State of the Union speech. "It won’t look like much. But if you stop and look closely, you’ll see a field of dreams.”

At first blush, the plant's future location does feel far from anything, surrounded by farms, fields and houses set on multi-acre plots. In fact, it's now part of the booming city of New Albany — a tony land of good schools and big houses where white fences line streets for miles. The city already boasts a large business park where 19,000 people work, as well as Amazon, Facebook and Google data centers.

New Albany annexed the Intel property, but the bigger impact has been on people in nearby Johnstown, current population 5,200. And few families have been as deeply affected as Corsi and her relatives.

Her son, Paul Corsi Jr., lived next door on 3 acres where he was raising two grandchildren. He's relocating to 14 acres where he and his mother will live.

One of Tressie's grandsons, Tony Kelly, lives one door down on 14 wooded acres with a pond with his wife and daughters ages 5 and 7. He took the approximately $1.7 million he was offered and bought 43 acres a few miles away.

Tony, 48, acknowledges he was paid well more than what his property was worth. But he also recounts the heart attack he suffered and his wife's ulcer as they dealt with the stress. And negotiations with the holding companies weren't exactly a soft sell, with warnings of living in “a war zone” of trucks and construction if they didn't cooperate.

“There’s not even a gauge that will read out how bad this has been on us,” he said. “It’s been horrible.”

“Our goal while we worked to help put Ohio in the running for this transformative opportunity was to be respectful of the property owners and the disruption they faced as a result of selling their property,” he said in a statement.

New Albany Mayor Sloan Spalding understands the loss that people are experiencing, especially those leaving their rural “forever homes” of decades or more. But Ohio, which just lost another congressional seat and has static population, could be transformed by Intel, he said.

Even if the project draws out-of-staters, GOP Lt. Gov. Jon Husted said, “Everybody who works at the plant will be an Ohioan.”

Watching the development unfold with mixed feelings is Tressie's granddaughter, Tiffany Hollis, who lives in Johnstown where she runs Dashing Diner Uptown. Most days find her working alongside her mother and daughter, serving up homestyle meals including Tressie's recipes for gravy and fried potatoes.

Tiffany, 45, spent many days on her grandmother's property and proudly displays photos of herself, her daughter Allie and her daughter Amelia, all being bathed in the same kitchen sink over the years.

Tiffany is torn by the project and its impact on her extended family, and she fears that her business will be overrun by chain restaurants. The family is not anti-Intel, she's quick to point out, saying they use Intel products and believe semiconductors should be made on U.S. soil. From a business perspective, Intel is a great opportunity.

“That tree has been my neighbor for 50 years. So sad to see it is no longer. Terrible,” she posted on Facebook when a farm's centuries-old oak tree was cut down.

Tressie's family removed a section of wall from her house recording her great-grandson Luke's height measurements. Tony used a forklift to remove a boulder at the end of the driveway that grandchildren once raced to and from. Paul Jr. wrapped crime scene tape around an ornamental cherry tree that Paul Sr. gifted Tressie to protect it from construction. The wall section, stone and tree are all destined for Tressie's new home.

Saving those artifacts provide some consolation to Tressie. But they can't replace the experience of sitting on her porch, sipping coffee in the morning while she watched hummingbirds at the feeder. In recent days, Tressie knew she had to stop filling it.

“Because they'll depend on it,” she said. “And then when they depend on that, when I go, what are they going to do?”