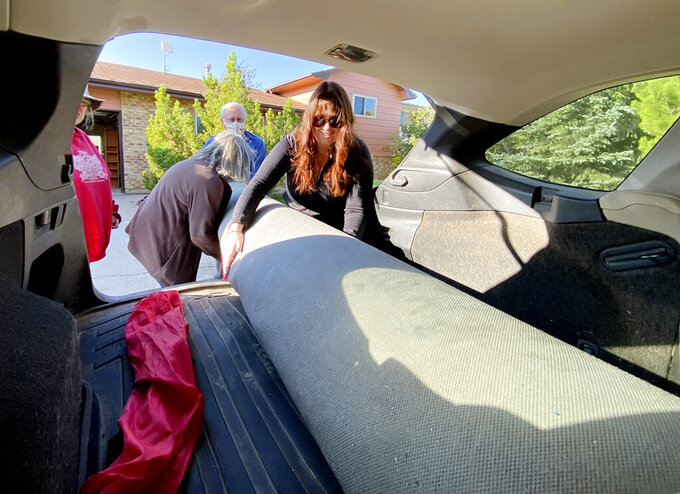 As a geophysicist, he traveled the world, performing important research. And there was no corner of the globe too far out of reach for that research, including Antarctica.

Between research jaunts, Laramie was home.

“Seriously, Jerry was one of the most interesting people I ever met in my life,” said Jessica Stalder, a friend of Bucher’s and executive director for Hospice of Laramie.

While he led a unique and colorful life, Bucher’s most lasting impact on the Laramie community promises to be felt for years after his Aug. 11 death.

“Jerry has been a friend for a long time, and when I started at hospice, he was nothing but supportive,” Stalder said. “His parents passed with hospice (care), and he just had a soft spot for it.”

His support for the end-of-life care hospice provides local patients and their families prompted Bucher to donate his house and everything in it to Hospice of Laramie, the Laramie Boomerang reports.

Potentially worth more than $300,000, the donation was “just unbelievably generous,” said Stalder.

A rug for winter

That’s why Friday’s estate sale at 1408 Beaufort St. was more than a glorified garage sale. It was a celebration of Bucher’s life and his dedication to giving back.

A retired registered nurse, Sue Vitullo was at the house bright and early Friday. She was on a mission to find something specific.

“I’m looking for a rug,” she said. “Because winter’s coming and rugs keep your home warmer.”

Vitullo found just what she was looking for in Bucher’s house, a large, heavy area rug she paid $20 for.

“It’s the perfect size, and it’s nice and warm,” she said, adding it will likely find a home in her master bedroom. “If you have a rug on your wood floor, you’re halfway there.”

That the sale was a benefit for Hospice of Laramie also hit close to Vitullo’s heart.

“I think it’s a great idea,” she said about the donation. “Hospice is so important. My husband died of lung cancer in Montana, and those last days are really rough. You need help. You need people around to help you.”

Although her husband didn’t have hospice care, Vitullo said that when she worked as a nurse, she saw the impact hospice services can have on the quality of life for patients and families in their last days.

“I sent people home all the time, and we got hospice for them,” she said. “It’s not just the training (of the hospice workers), it’s because the family is exhausted because they’re taking care of a person all the time.

“They’re worn out, they’re exhausted, they’re drained, they’re worried about money. Hospice gives them someone to talk to, and just love them and help them.”

That the sale of Bucher’s home will help pay for inpatient hospice services for numerous families possibly for years means his spirit in life lives on, said Lou Farley, spiritual advisor for Hospice of Laramie.

“This donation is incredible,” he said. “People talk about mortality and the end of life. I believe it’s in people’s generosity – Jerry Bucher’s generosity – that he didn’t end. He’s still moving forward.

“And every patient that gets blessed with care and community and excellent nursing is being blessed by Jerry. So, he never really went anywhere. He just kind of diffused into our community. I really do believe that.”

While the donation of a house and everything in it is something Stalder hadn’t heard of before, she said it wasn’t the full extent of Bucher’s generosity. He had a long history of supporting organizations and projects around Laramie and Albany County.

Many people around the community “probably know him,” she said. “He’s been involved with so many organizations. There’s the group called The Curmudgeons, this group of older guys who do community service projects. He was involved with them.”

Shortly before his death, Stalder said Bucher donated $50,000 to the local skate park.

“I remember him telling me he went down to the skate park in the morning and there were a bunch of little kids there, and it looked very legit,” she said. “In the afternoons, it was teenagers, and it was legit.

“Nighttime? Not so much.”

That’s when Bucher decided to donate $50,000 to improve the lighting at the skate park.

Those lasting impacts Bucher has left is why Farley believes Bucher’s spirit in Laramie is still alive and well.

“Whether people know his name or not, the next time an indigent patient comes into hospice and can’t pay for their services, and we have the money from the sale of this house, that person is being blessed by Jerry,” he said.

The same is true for anyone enjoying a safer, more friendly skate park after dark, or any of a number of other anonymous lasting impacts Bucher has had on Laramie.