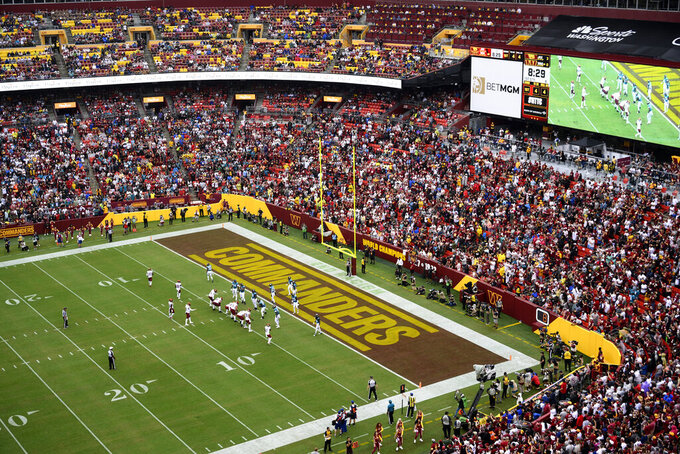 Nick Wass, ASSOCIATED PRESS
Fans watch as the Washington Commanders face the Jacksonville Jaguars in an NFL football game, Sunday, Sept. 11, 2022, in Landover, Md. The Washington Commanders have been sued again by the District of Columbia, this time accused of scheming to cheat fans out of ticket money. D.C. Attorney General Karl A. Racine on Thursday, Nov. 17, 2022, announced the filing of a lawsuit in civil court against the NFL team for the team's actions in taking season-ticket holder money and keeping it for its own purposes. (AP Photo/Nick Wass, File)

The Washington Commanders have been sued again by the District of Columbia, this time accused of scheming to cheat fans out of ticket money.

D.C. Attorney General Karl A. Racine on Thursday announced the filing of a lawsuit in civil court against the NFL team for its actions in taking season-ticket holder money and keeping it for its own purposes.

It’s the second civil suit by Racine’s office in eight days, after last week filing a complaint in D.C. Superior Court that the Commanders, owner Dan Snyder, Commissioner Roger Goodell and the league colluded to deceive fans about an investigation into the team’s workplace culture.

Racine in a statement said the club's ticket policy in question “is yet another example of egregious mismanagement and illegal conduct by Commanders executives who seem determined to lie, cheat and steal from District residents in as many ways as possible.”

In the latest complaint, the District says the Commanders as of March still held nearly $200,000 in unreturned security deposits paid by season-ticket holders who qualify as D.C. consumers under the Consumer Protection Procedures Act.

The complaint alleges the team “deceptively” held onto deposits beyond the 30 days spelled out in ticket-holder contracts — sometimes for more than a decade — and said it capitalized on consumers forgetting about the money or imposed extra, burdensome conditions to get it back.

In a statement responding to the suit, a Commanders spokesperson said the team has not accepted security deposits for more than a decade for suites and more than 20 years for premium tickets and began returning money to season-ticket holders in 2014.

“In 2014, as part of a comprehensive review, team management was instructed to send notices to over 1,400 customers with deposits and return all security deposits requested,” the spokesperson said. “The team engaged an outside law firm and forensic auditors to conduct an extensive review of the team’s accounts, which found no evidence that the team intentionally withheld security deposits that should have been returned to customers or that the team improperly converted any unclaimed deposits to revenue. ”

This lawsuit comes after the U.S. House Committee on Oversight and Reform in April referred its investigation that centered on workplace misconduct to the Federal Trade Commission for potential financial improprieties, which the Commanders denied in a subsequent letter to the FTC.

Attorneys general for D.C. and Virginia then opened up parallel investigations, and the league retained former U.S. Attorney Mary Jo White to look into Washington's questionable business practices in withholding ticket revenue not only from fans but from other teams.

The latest lawsuit kept one of several investigations into the team on multiple fronts ongoing while another is set to wrap up early next year.

The ranking Republican on the Oversight Committee declared its investigation will end early next year when his party takes over control of the House of Representatives. “It's over,” Rep. James Comer of Kentucky said in a brief statement, which came after The Associated Press and other outlets projected Republicans clinched a narrow majority in the House for the 118th Congress that begins meeting Jan. 3.

Democrats led by chairwoman Carolyn Maloney of New York and Economic and Consumer Policy Subcommittee Chairman Raja Krishnamoorthi of Illinois had been presiding over the investigation since last year. Comer vowed over the summer to bring it to a halt if Republicans won House control from midterm elections, as expected.

The team in a statement through legal counsel praised the decision to drop the case.

“The Congressional investigation has added nothing of value to this process and, indeed, the independent firm (Vestry Laight that is) monitoring the improvements in the Commanders’ workplace has singled out the investigation as an impediment to further progress," attorneys John Brownlee and Stuart Nash said, adding the investigation has not interviewed any current employees and has relied largely on those who have been fired or left the organization.

A spokesperson for the House Oversight Committee said there were no updates on the investigation, which included virtual testimony from NFL Commissioner Roger Goodell in a public hearing and a private virtual deposition by Washington owner Dan Snyder that lasted for more than 10 hours, the contents of which have yet to be released.

Dan and wife Tanya recently hired a firm to explore possible transactions, which could include selling part or all of the team Snyder has owned since 1999. Racine said last week Snyder would still be a defendant in the initial lawsuit even if he sold the Commanders.