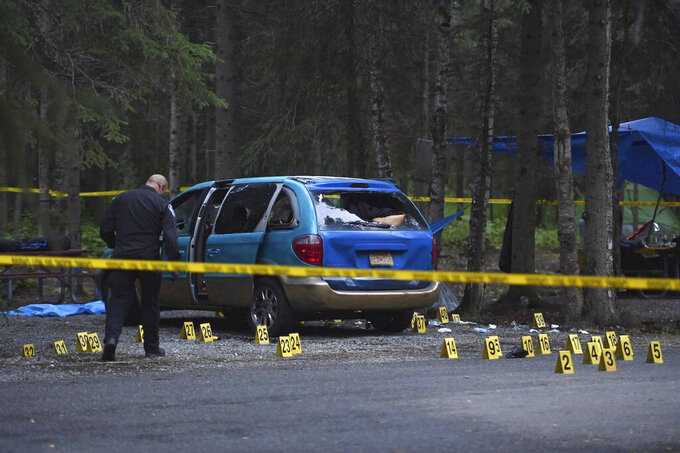 ANCHORAGE, Alaska (AP) — An Anchorage police officer and a man were wounded late Wednesday in a gun battle at a city-owned campground that has been turned into an outdoor shelter for homeless people.

The shooting occurred the same day another bear attracted to unsecured food was killed in the campground.

Two officers were conducting a security check at Centennial Campground in east Anchorage when they came across a vehicle that matched the description of one that had eluded police on Tuesday, updated information released Thursday by the Anchorage Police Department said.

Police said they saw a man, later identified as Iese Gali Jr., 32, near the vehicle. Officers tried to talk to him, but police said in a statement that he ignored them and walked to another vehicle.

Officers ordered him to stop, but he got in the vehicle, police said. The two officers went to remove him from that vehicle, when a struggle started. Police said Gali pulled a weapon and fired at the officers, injuring one.

Police said both officers returned fire, and called for backup.

Both wounded men were taken to the hospital and are expected to survive, police said. Police have said that the officer sustained serious injuries. The second officer was uninjured.

Police say a warrant was served on Gali for attempted murder, assault and misconduct involving a weapon. He will be jailed once he is released from the hospital.

The state’s Office of Special Prosecutions will investigate to determine if the officers’ use of force was justified. Following that, the Anchorage Police Department’s Internal Affairs division will review the shooting to see if there was any violation of policy.

The officers have been placed on four days of administrative leave, per department policy, and their names will be released 72 hours after the shooting.

Earlier Wednesday, Alaska Wildlife Troopers killed a black bear that authorities believed was going into tents looking for food, the fifth bear killed at the campground this month. Officers from the Alaska Department of Fish and Game killed four black bears in the campground on July 5.

The municipality of Anchorage closed its mass shelter at Sullivan Arena at the end of June and set up the campground for people who are homeless.

Unsecured food at the campground situated at the edge of the Chugach State Park in what officials call prime bear habitat has enticed bears.

The city has provided bear-proof food storage containers and enhanced security, but food issues remain a problem in the camp where about 200 people are living.

“It’s a continual large-scale attractant. It’s not just the occasional tent that has it, it seems to be a lot of the tents that have it,” Dave Battle, Anchorage area biologist for the Department of Fish and Game, told the Anchorage Daily News.

“Unless we can keep attractants out of tents, almost any bear that happens by there is going to end up in the camp and in tents,” he said. “It’s a very unfortunate situation.”