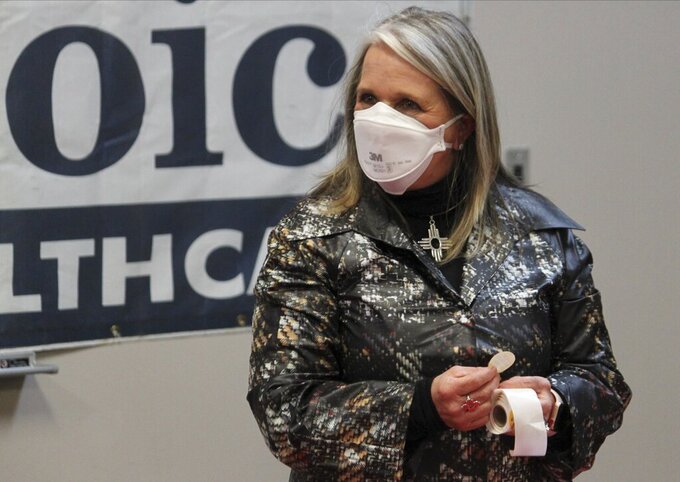 Susan Montoya Bryan, ASSOCIATED PRESS
This April 21, 2021 image shows Gov. Michelle Lujan Grisham preparing to hand out stickers to people who just received their COVID-19 vaccinations at a health clinic in Albuquerque, New Mexico. Lujan Grisham on Wednesday, April 28, 2021, announced that the state would reopen and lift its capacity restrictions on restaurants and other businesses when at least 60% of residents 16 and older are fully vaccinated. She said that's expected to happen at the end of June. (AP Photo/Susan Montoya Bryan)

ALBUQUERQUE, N.M. (AP) — Gov. Michelle Lujan Grisham on Wednesday said she expects New Mexico to reopen completely by the end of June if the state reaches its goal of having at least 60% of residents fully vaccinated by then.

She made the announcement during a virtual briefing, proclaiming that the state was “conquering COVID.”

Lujan Grisham and state health officials said the state's pace of vaccinations has been as an overwhelming driver for the progress seen in recent months, with more than 60 people vaccinated for every new case of COVID-19 reported.

The latest state data shows that more than 41% of state residents 16 and older are fully vaccinated. New Mexico remains among the leading states when it come to vaccine distribution. Officials running one of the state's largest vaccination clinics in Albuquerque said the site's 100,000th dose was administered there Wednesday afternoon.

The Democratic governor predicted that New Mexico would be among the first states in the U.S. — if not the first — to have such a high percentage of its population fully vaccinated.

“This is cause for incredible celebration,” Lujan Grisham said.

State health officials said benchmarks used to assign risk levels to counties under New Mexico's color-coded system will be relaxed and will include vaccination rates. That change will take effect Friday, and the state's public health order will be updated to reflect new federal guidance on mask-wearing for those who are fully vaccinated.

While capacity limits at restaurants and other businesses would be lifted when the state reaches its vaccination goal, Lujan Grisham said she didn't want people to let their guard down. She said certain COVID-safe practices will remain for specific activities.

Republican lawmakers who have criticized the state's reopening framework as outdated said Wednesday that the changes were long overdue.

“We have been shouting for months that the people in our communities are suffering because of these continued illogical and unscientific protocols," said state Sen. Greg Baca of Belen. "While I am thankful that the governor has finally taken action to remedy some of these issues, I hope it is not too little, too late.”

State Health Secretary Dr. Tracie Collins said her agency is encouraging primary care doctors to help with the vaccination effort along with community health organizations and other advocacy groups.

Still, not everyone wants to be vaccinated.

Researchers at University of New Mexico Health Sciences have been awarded $1.4 million in federal funding to explore why. The yearlong project, funded by the National Institutes of Health, is part of a national effort to understand and overcome barriers that keep people from getting vaccinated.

“Our goal is to make as much impact as we can in one year,” Lisa Cacari Stone, a professor and director of the Transdisciplinary Research, Equity and Engagement (TREE) Center, said in a statement. “We’re going to look at the hesitancy and take a deeper dive to understand the structural systems issues.”

The researchers will partner with more than 200 organizations that work in communities around the state to understand ethnic and rural-urban disparities, Cacari Stone said.

The focus will include Hispanic populations along New Mexico’s southern border, urban Native Americans and a rural community on the Navajo Nation. The team plans to issue monthly updates.