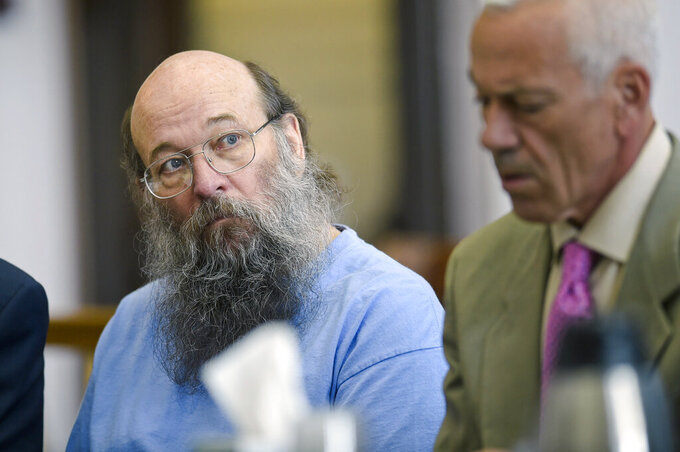 Thom Bridge, ASSOCIATED PRESS
FILE - This June 7, 2018, file photo shows Lloyd Barrus, left, appearing before District Court Judge Kathy Seeley in Helena, Mont., for a status hearing regarding charges stemming from the killing of Broadwater County Sheriff's Deputy Mason Moore in May 2017. Barrus, now 65, faces a trial beginning Thursday, Sept. 9, 2021, in Butte for accountability to deliberate homicide in Moore's death as well as two counts of attempted deliberate homicide for shots fired at officers during a pursuit that ended with the death of Barrus' son, Marshall. (Thom Bridge/Independent Record via AP, File)

BUTTE, Mont. (AP) — A trial is scheduled to begin this week in the case of a California man who was arrested over his alleged role in the shooting death of a Montana sheriff’s deputy in May 2017.

Opening statements begin in Butte on Thursday, The Montana Standard reports. Twelve jurors and three alternates have been selected to hear the case.

Lloyd Barrus, 65, faces accountability to deliberate homicide charges in the death of Broadwater County Deputy Mason Moore near Three Forks as well as two counts of attempted deliberate homicide for shooting at and trying to kill other officers during a pursuit and shootout near Missoula, authorities said.

Barrus and his son Marshall Barrus had anti-law enforcement views and often talked about going on a suicide mission involving police. Witnesses told investigators they had talked about doing so in the hours before the shooting, court records said.

Moore was pursuing Barrus and his son at speeds of up to 100 mph (161 kph) when he was shot at about 2:30 a.m. on May 16, 2017. The patrol car audio and evidence at the scene indicated that the SUV turned around and drove back to Mason's car where he was shot again several times, prosecutors said.

Officers spotted the SUV near Butte. During a 160-mile (257-kilometer) pursuit on Interstate 90, Marshall Barrus fired rounds from a long gun at pursuing officers and two Butte police vehicles were disabled, court records said. The pursuit ended east of Missoula when the SUV ran over spike strips.

Both men got out of the SUV and fired at surrounding law enforcement vehicles, hitting four, court records said. Officers fatally shot Marshall Barrus in the head. Officers shot a handgun out of Lloyd Barrus' hand before arresting him.

District Judge Kathy Seeley of Helena said the trial could take up to three weeks.

The trial has been delayed as Lloyd Barrus was initially found unfit to stand trial. Seeley ordered that Barrus begin given antipsychotic medications via injection because he refused to take medication to treat his delusional disorder. The Montana Supreme Court upheld the forced medication order.

Moore, 42, is survived by his wife and three children.