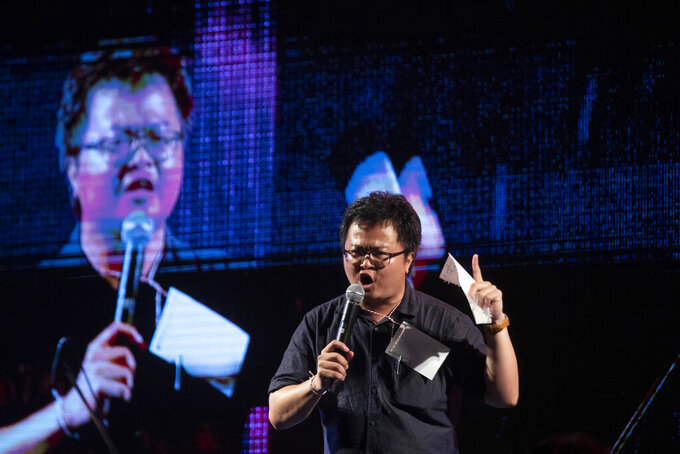 BANGKOK (AP) — Thailand’s Constitutional Court ruled Wednesday that three pro-democracy activists who called for reform of the monarchy were attempting to overthrow the nation’s system of government with the king as head of state.

The ruling banned any similar activities in the future by the activists and their organizations. It also appeared to broadly deter calls for reform of the monarchy by highlighting legal liabilities beyond a royal anti-defamation law under which more than 150 activists have been charged in the past two years.

The ruling came in response to a complaint by a royalist lawyer who accused the activists of attempting to overthrow “the democratic system of government with the king as head of state.”

The decision has broader application beyond the three defendants, said Piyabutr Saengkanokkul, a legal expert and prominent progressive activist.

“This decision has drawn a line and creates a ‘red zone,’ meaning that if you don’t want to get charges or punishment, don’t touch the monarchy,” he said.

The court also implied that the authority of the royal palace supersedes other institutions. The king’s role since the absolute monarchy was abolished in 1932, at least according to conventional wisdom, has been to reign but not rule.

However, since King Maha Vajiralongkorn took the throne after the death in 2016 of his father, King Bhumibol Adulyadej, the palace has steadily accumulated power and has downplayed the historical significance of the 1932 revolution which established a constitutional monarchy.

The protests demanded the resignation of Prime Minister Prayuth Chan-ocha, who came to power in 2014 by staging a coup as army commander; amendment of the constitution to make it more democratic; and reform of the monarchy to make it more accountable.

The demand for reform of the monarchy is the most radical and controversial because the royal institution has rarely faced public scrutiny and is considered by many to be a sacrosanct pillar of Thai identity. Its reputation is fiercely guarded by the country’s ruling elite, including the courts and the military.

The Constitutional Court is seen by legal scholars as the conservative Thai establishment’s bulwark against change, with a particular devotion to the monarchy.

Its ruling Wednesday represents the latest defense of the royal institution, which has come under pressure due to sharp political divisions in the Southeast Asian country over the last two decades. An earlier military coup forced Prime Minister Thaksin Shinawatra out of office in 2006, but set off years of sometimes violent conflict between his supporters, who were attracted by his populist policies, and his detractors, who believed he was challenging the monarchy’s standing.

The coups carried out by the royalist military in 2006 and 2014, and what appeared to critics to be a series of court rulings biased against Thaksin and his allies, polarized public opinion and led to unprecedented questioning of the role of the palace in politics.

All three of the defendants — Panusaya “Rung” Sitthijirawattanakul, Arnon Nampa and Panupong Jadnok — have already been charged under Article 112 of the Criminal Code, which prohibits defamation of the monarchy and is punishable by three to 15 years in prison, and under Article 116, which forbids the use of force to change laws or the government and is punishable by up to seven years.

There are fears that the court’s ruling could open the way for prosecutions under another, harsher law.

“What is most concerning about this is it means that the protesters could eventually be charged with violation of Article 113, or revolt, which is punishable by life imprisonment or the death penalty,” said Prof. Tyrell Haberkorn, a Thailand specialist at the University of Wisconsin.

Article 113, which covers acts of revolt or rebellion, "is generally used against those who attempt coups,” she said in an online interview.

“In the short term, I suspect this will prompt a large number of people to go into the streets” to protest, she said.

After the ruling, Panusaya said the activists had no intention of overthrowing the country’s system of government.

“The court’s decision today has already told us what our future will be,” she said.