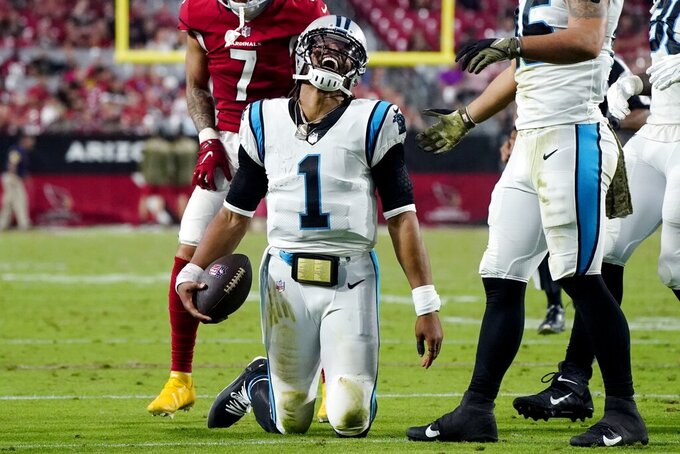 Darryl Webb, ASSOCIATED PRESS
Carolina Panthers quarterback Cam Newton laughs after being tackled after a long run against the Arizona Cardinals during the second half of an NFL football game Sunday, Nov. 14, 2021, in Glendale, Ariz. The Panthers won 34-10. (AP Photo/Darryl Webb) 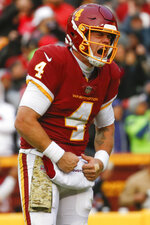 CHARLOTTE, N.C. (AP) — Ron Rivera knew at some point he would have to prepare a game plan to face his former quarterback and longtime friend Cam Newton.

That time is here.

Newton is expected to start Sunday when the Panthers (5-5) host the Washington Football Team (3-6) in a game that pits a quarterback against his former coach of nine seasons in Carolina.

Together, Newton and Rivera helped the Panthers reach the Super Bowl in the 2015 season and win three division titles.

Rivera was fired late in the 2019 season and Newton was let go the following offseason by a new Panthers regime.

But Newton rejoined the Panthers last week on a one-year deal after Carolina's quarterback situation reached the point of desperation after struggling starter Sam Darnold went down with a 4 to 6 week shoulder injury.

The 32-year-old QB's return couldn't have gone any better as he provided an instant jolt to the offense, scoring touchdowns the first two times he touched the ball coming off the bench in Carolina's 34-10 upset win on the road last week against the Arizona Cardinals. He has single-handedly rejuvenated a team that had lost five of its six previous games.

Rivera makes his return to Charlotte, where he was a popular figure for most of his tenure.

“It's going to make for a heck of a game,” Rivera said.

Rivera said the Panthers adding Newton was a “bold move” considering the playmakers the team already has on offense, including Christian McCaffrey, D.J. Moore and Robby Anderson.

“They have some talent there,” Rivera said.

Newton has been cramming to learn the offense after joining the team at practice last Friday. He had a 10- to 15-play package going into the Arizona game, but Panthers coach Matt Rhule is hoping Newton can grasp enough of the offense to start this week over P.J. Walker.

Rhule said it is not so much about Newton learning the playbook, but more about learning the game plan including protections in the running and passing game.

“We all understand Cam is like a force of nature in the things he brings" on the field, Rhule said. "But I don’t want that to be all that people realize. I’ve only known him a short time. What I see is a true professional that wants to win and puts the time in.”

Added Rivera: "I think it’s an opportunity for him to go back home, to pick up where he started off. It’s kind of a cool deal.”

Rivera isn't the only one with ties for Carolina.

Washington's starting quarterback Taylor Heinicke — as well as his backup Kyle Allen — previously played for the Panthers before moving on to Washington.

“I think he’s playing with a lot more confidence," Rivera said of Heinicke. "I think his decision-making is getting better, obviously, and I think with him it’s just a matter of getting reps and opportunities. I think he has improved a lot and we’re seeing it."

Terry McLaurin took a big hit from Tampa Bay safety Jordan Whitehead to make a third-down catch late in Washington’s upset victory last week and popped to his feet with no delay. The team’s top receiver with 632 yards and four touchdown catches is determined to play that way and lead by example.

“I’m never afraid to go over the middle and put my nose in there catching the ball, blocking and things like that because being a leader and the type of player that I am, I feel like that’s extremely important,” McLaurin said.

“I pray before every game just to have health and strength. Wins, losses, production — things like that — those are bonuses to me. As long as I come out of the game healthy, I think that’s a blessing in and of itself.”

Washington will be without reigning Defensive Rookie of the Year Chase Young for the remainder of the season after he tore the ACL in his right knee. Also out is fellow pass rusher Montez Sweat, who has a broken jaw.

Their absences mean more responsibility for younger players such as James Smith-Williams and rookie Shaka Tokey. Defensive tackle Daron Payne said the key is “building that chemistry up and learning how to rush with the younger guys and just getting them on the same page that we were on.”

Christian McCaffrey had an increased role last week in his second game back from a hamstring injury for Carolina and his playing time is expected to grow this week.

McCaffrey played 59% of the team's plays and was effective in gaining 161 yards from scrimmage. His versatility as a receiver presents problems for a Washington defense that has struggled to defend running backs coming out of the backfield and ranks 30th overall against the pass. McCaffrey has 11 100-yard receiving games, the most of any running back in NFL history.

Haason Reddick has been a force at outside linebacker for the Panthers this season, with 9 1/2 sacks. Reddick has 17 sacks in his past 14 games going back to his time last season with Arizona.

Washington has allowed 20 sacks this season.