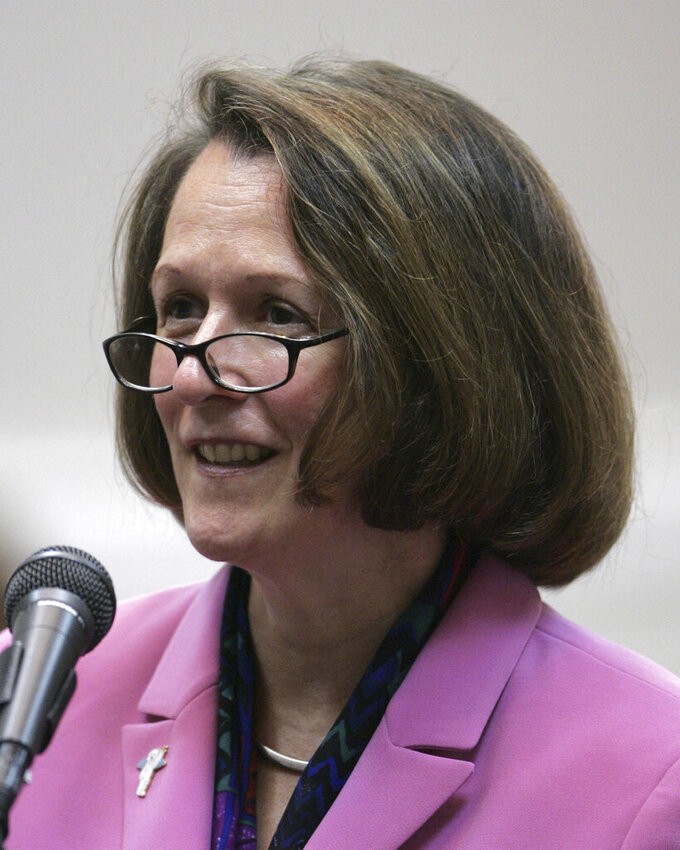 Mark Humphrey, ASSOCIATED PRESS
FILE - Cornelia Clark, a nominee to fill the vacancy on the Tennessee Supreme Court to replace Justice Frank Drowota, attends the meeting of the Tennessee Judicial Selection Commission on Thursday, July 21, 2005, in Nashville, Tenn. Tennessee Supreme Court Justice Clark has died at the age of 71, the court announced Friday, Sept. 24, 2021. She had been diagnosed with cancer. (AP Photo/Mark Humphrey, File)

NASHVILLE, Tenn. (AP) — Tennessee Supreme Court Justice Cornelia Clark has died at the age of 71, the court announced Friday. She had been diagnosed with cancer.

According to a news release, Clark died overnight after 16 years in her role, serving the longest tenure of her counterparts on the court while she was on the bench for more than 1,100 Supreme Court cases. Republican Gov. Bill Lee, who selects Clark's replacement, called her a “trailblazer for women in the legal profession.”

Clark was appointed to her seat in 2005 by former Democratic Gov. Phil Bredesen and served as chief justice from 2010 to 2012. Chief Justice Roger Page said Clark, better known as Connie, “loved the Tennessee judicial system and has made it better in immeasurable ways.”

“As her colleague for the past five and one-half years, I observed her tremendous work ethic," Page said in the news release. "Her keen mind was surpassed only by her kind and caring heart. She truly tried her best to decide each case based on the applicable law and nothing else.”

All but one of the remaining justices — Sharon Lee, whom Bredesen also appointed — were appointees of former Gov. Bill Haslam, signaling a likely shift further rightward for the court with an appointment by Gov. Lee. The Governor’s Council for Judicial Appointments will recommend three candidates to the governor, who will make his pick. The GOP-supermajority Legislature must confirm the selection.

For now, the Supreme Court will hear cases with four justices, as it has done many times previously, including in 2016 when Justice Gary Wade retired and before Page was appointed, said court spokesperson Barbara Peck.

Clark notably was reelected in judicial retention elections in 2006 and 2014, when she was one of three Democratic justices, including Lee, who withstood a conservative campaign against them. Justices serve eight-year terms. Their next retention elections are in 2022.

“Our friendship strengthened over the years as we faced challenges together — such as the contested retention election in 2014 — and through our laughter and good times when we joined with fellow women judges at our ‘Tennessee Chicks Rule’ dinners, and when we traveled to Cuba to study their judicial system," Justice Lee said in the release. “I saw first-hand Justice Clark’s tireless dedication to her faith, her family, her friends, the judiciary, and access to justice for all.”

Before joining the court, Clark served as director of the Administrative Office of the Courts from 1999 to 2005. She became the first female trial judge to serve rural counties in Tennessee when former Democratic Gov. Ned McWherter appointed her in 1989 to the 21st Judicial District of Williamson, Hickman, Perry and Lewis counties.

She served in numerous initiatives within the court system and was involved in bar, community and religious organizations in Middle Tennessee and nationally for more than four decades. She taught fellow judges at the National Judicial College, American Academy of Judicial Education and the American Institute for Justice, and taught students at the Vanderbilt University School of Law and the Nashville School of Law. She also was a lifelong member of First United Methodist Church in Franklin, where she served as lay leader.

She was the court's liaison to the Access to Justice Commission starting in 2014, helping the panel recently to hit a long-term goal of having at least half of all Tennessee attorneys provide pro bono legal services each year.

The 1979 Vanderbilt University Law School grad practiced law in Nashville and Franklin, becoming one of the first woman partners at a large Nashville law firm in 1984.

Her appointment in 2005 made her the fourth woman to serve on the state Supreme Court. She was only the second woman to become chief justice in Tennessee. Since 2008, the majority of Tennessee's high court justices were female. With Clark's passing, there are now with two men and two women until a replacement is installed.