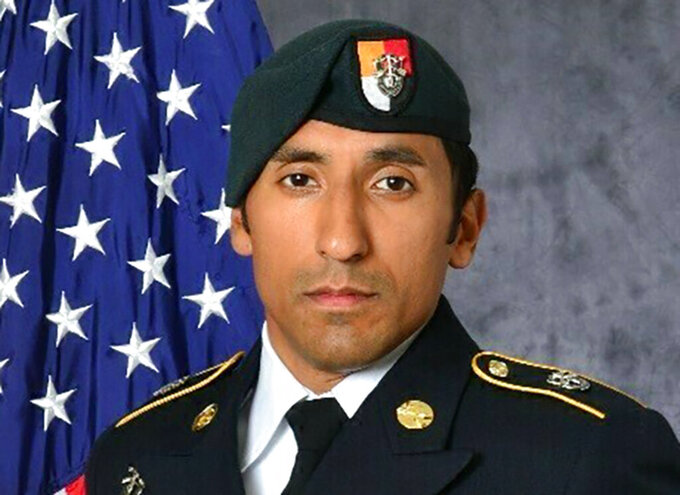 Uncredited, ASSOCIATED PRESS
FILE - This undated photo provided by the U.S. Army shows Army Green Beret Logan Melgar, who died from non-combat related injuries in Mali in June 2017. A military appeals court on Tuesday, Nov. 15, 2022, has ordered a new sentencing hearing for a U.S. Navy SEAL who got 10 years in prison for his role in the hazing death of Meglar while the men served in Africa. (U.S. Army via AP, File)

NORFOLK, Va. (AP) — A military appeals court has ordered a new sentencing hearing for a U.S. Navy SEAL who got 10 years in prison for his role in the hazing death of a U.S. Army Green Beret while the men served in Africa.

Prosecutors failed to disclose that a U.S. Marine who testified against the SEAL — and who participated in the hazing — had asked for clemency in exchange for his testimony, the court ruled. The SEAL's defense attorneys missed the chance to question the Marine about a “potential motive to misrepresent events."

DeDolph, a Wisconsin native, was a member of the elite SEAL Team 6. He was one four American servicemembers — two SEALs and two Marines — who were charged in the death of Army Staff Sgt. Logan Melgar, a Texas native.

The hazing occurred in 2017 while the men served in Mali. Charging documents don’t state why they were there. But U.S. Special Forces had been in Africa to support and train local troops in their fight against extremists.

The case offered a brief window into how some of America's most elite servicemembers have addressed grievances outside the law.

DeDolph testified during his 2021 court-martial that the four men were trying to get back at Melgar and teach him a lesson over perceived slights. In particular, some were upset that they missed a party at the French Embassy in the capital city of Bamako because Melgar and the others got separated in traffic.

DeDolph said they plotted an elaborate prank for Melgar known as as a “tape job." That included binding Melgar with duct tape, applying a choke hold to temporarily knock him out and then showing Melgar a video of the incident sometime later.

DeDolph said his role in the prank was to cause Melgar to temporarily lose consciousness by placing him in a martial-arts-style chokehold. DeDolph said the “rear naked choke” restricts blood flow in the neck and is used in the military.

“I effectively applied the chokehold as I have done numerous times in training,” DeDolph said.

Melgar lost consciousness in about 10 seconds, but failed to wake up after the typical 30 seconds, DeDolph testified.

“Usually by that time, the individual has gotten up,” DeDolph said. “And he did not.”

DeDolph pleaded guilty to involuntary manslaughter and hazing, among other charges. A sentencing hearing followed, during which one of the Marines testified on behalf of the government. The appeals court used a synonym to identify the Marine in its ruling.

The Marine's role in the hazing included raising the mosquito netting around Melgar’s bed and binding his arms and legs with tape, the appeals court wrote. The Marine offered a detailed account of the assault, including the methods that DeDolph used to render Melgar unconscious.

“The fact that (the Marine) sought additional clemency ... in exchange for his testimony is clearly information that tended to demonstrate (his) bias, and bore on his credibility,” the appeals court wrote. DeDolph's attorneys were denied the opportunity to examine the Marine's potential bias and whether he had a "motive to exaggerate his testimony.”

The Marine's sentence was later reduced from four years confinement to three years.

"(T)here is a reasonable possibility that the outcome of the trial would have been affected by the disclosure of the clemency request,” the court wrote.