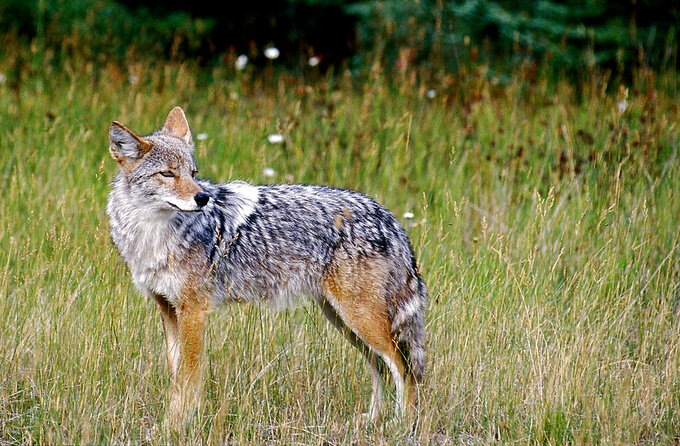 Karen Nichols, ASSOCIATED PRESS
FILE - In this Feb. 10, 2013, file photo, a coyote stands in a field in Montana. The Nevada Department of Wildlife's efforts to develop a policy on coyote killing contests are failing to progress as commissioners say they little faith that hunters and conservationists can reach agreement. (Karen Nichols/The Daily Inter Lake via AP)

RENO, Nev. (AP) — The Reno City Council is the latest to join the push to outlaw wildlife killing contests in Nevada.

The council approved a resolution on a 6-1 vote this week urging an end to the practice. Mayor Hillary Schieve called the contests that often target coyotes “heinous.”

The state wildlife commission is scheduled to consider the matter at its Sept. 24 meeting.

Councilwoman Bonnie Weber was the lone vote against the Reno resolution on Wednesday, saying that it should not be the city’s place to take a stance on the issue. Her ward stretching north of Reno into more rural areas includes Lemmon Valley, where a bar has sponsored past annual coyote hunts among the most prominent in northern Nevada.

The resolution the council approved honors the late Norm Harry, a member of the Pyramid Lake Paiute Tribe who protested the competitions. His daughter Autumn, whose family grew up hunting, explained why she continued in her father’s footsteps and spoke out against the coyote contests.

“It’s really inhumane to see the treatment of these animals,” Harry said. “The way that I grew up, I was always taught to be respectful towards all animals and if you’re going to hunt, you use the animal whole and utilize every piece.”

Hunters in the coyote contests use dogs, scopes and rifles to kill the most animals, sometimes for prizes. Unlike predators such as gray wolves or prey species such as elk, coyotes have no species protections and can be killed without licenses.

Some states like Utah and South Dakota offer bounties for coyotes to control their population. Coyote killing contests have been banned in at least eight states since 2014, including Arizona, Colorado and New Mexico, which in the past rotated hosting the World Championship Coyote Calling Contest with Nevada.

KRNV-TV reported most of the public comment at the city council meeting backed the resolution and urged the Nevada Department of Wildlife to ban the contests.

Fanua Tomlinson, a representative for Project Coyote, a nonprofit that advocates to end the competitions, said there’s no evidence the contests forward the goals of wildlife conservation.

“There is not one state department that recognizes wildlife killing contests as a viable scientific management tool. Not even NDOW,” she said. “They’re just not ethical hunting ... It’s wanton waste. Nobody uses these dead carcasses.”

State wildlife commissioners acknowledged last month they were losing hope they could find a resolution to the matter that would appease people on both sides after surveying attendees at a meeting earlier this year.

The survey asked participants to rank priorities including “social perception of hunting,” “wanton waste” and “tradition/heritage,” and floated ideas like public notices, bag limits or licenses.

“I was optimistic that we could get different constituencies in to help us really dissect this and learn where there may be some common ground," Chairwoman Tiffany East said at a commission meeting last month. "But after today, I’m being honest, I don’t know that we’re any further along than I had hoped.”