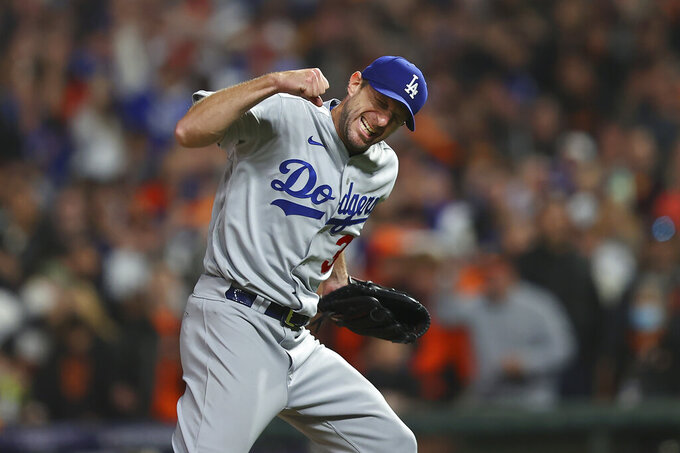 The Dodgers are ready to start ace Max Scherzer in Game 2 of the NL Championship Series against Atlanta, a day after manager Dave Roberts scratched the veteran right-hander to get him an extra day of rest.

Scherzer got his first career save Thursday by pitching the ninth inning of a 2-1 Game 5 win against San Francisco to close out their NL Division Series. Roberts planned to run him back out for NLCS Game 1 until Scherzer said his arm felt a little tired after a workout Friday.

Scherzer expects to be able to give maximum effort Sunday, and he could still be available for another start later in the seven-game series.

At just 23 years old, Ian Anderson already has quite a postseason resume. Atlanta’s Game 2 starter is 3-0 with a 0.76 ERA in five career playoff starts, including five strong innings in a 3-0 Game 3 win over the Brewers in their NL Division Series.

Going with Anderson allows manager Brian Snitker to get an extra day of rest for veteran Charlie Morton, who is lined up for Game 3.

The Astros' bruised and battered pitching staff gets a day to recover in Boston before their AL Championship Series resumes with Game 3 on Monday.

Starter Luis Garía was pulled in the second inning of Game 2 with right knee discomfort. That came after he allowed a first-inning grand slam to J.D. Martinez but before reliever Jake Odorizzi allowed another to Rafael Devers in the second. Boston is the first team with two grand slams in a postseason game.

Houston is also without starter Lance McCullers Jr., who was left off the ALCS roster because of a flexor pronator muscle strain in his right arm. He was feeling better Saturday but still isn’t able to throw. His availability for the World Series should the Astros advance is unclear.

Game 1 starter Framber Valdez covered just 2 2/3 innings in a 5-4 win, forcing manager Dusty Baker to push the bullpen hard over the first two games of the series, too.

Jose Urquidy is lined up to start Game 3 for Houston, which is knotted at a game each with Boston. The Red Sox hadn't announced a starter but had both Nick Pivetta and Eduardo Rodriguez in play after neither appeared in relief in the first two games.