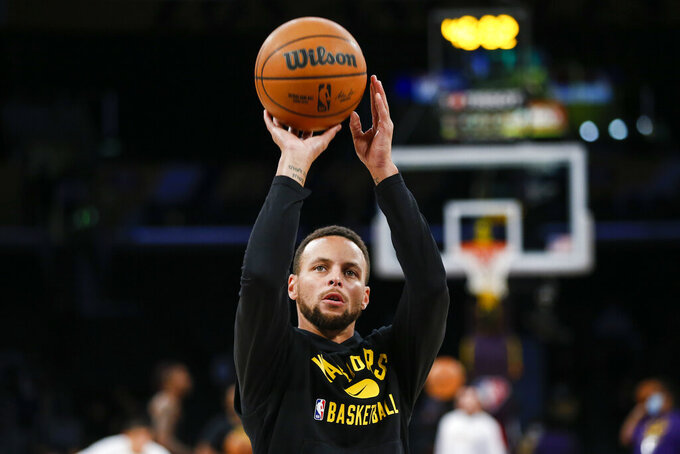 In the opening seconds of Stephen Curry’s NBA career he got an assist on the first possession, a steal on the second and then tried a 3-pointer for the first time at the professional level.

In that moment, there probably were not very many people expecting he would become the most prolific 3-point shooter in NBA history. Yet as the new NBA season starts Tuesday night, so does the countdown toward Curry surpassing Ray Allen’s mark for 3’s made in a career.

Allen retired with 2,973 3-pointers in regular-season games. Curry is 141 behind, with 2,832 in his career. At his typical rate of 3’s made in recent years — about five per game — the Golden State sharpshooter could have the record by mid-December.

Curry is the only player in NBA history to average at least five made 3’s per game over a full season. He’s done it three times. Curry also has four of the five seasons of at least 300 made 3’s, including a record 402 in 2015-16; James Harden had the other 300-plus season on that list.

Allen never made more than 269 3’s in a season. Curry has topped that on six different occasions.

Some other storylines and milestones to watch this season:

And, technically, this season as well.

If James averages 25 points per game, which he did last year, he would catch Malone in his 63rd game this season and could reach Abdul-Jabbar’s mark sometime around the midpoint of the 2022-23 campaign.

All those numbers are regular-season games only, and for purposes of NBA record-keeping, that is the official tally.

But if adding the playoffs, James is in line to become No. 1 in career scoring this season. With postseason included, he has scored 42,998 points, just 1,151 away from Abdul-Jabbar’s 44,149, meaning that’s well within range for James this season.

San Antonio’s Gregg Popovich has 1,310 career regular-season wins, putting him 26 away from outright possession of the NBA record. He’s currently third on the list, behind only No. 2 Lenny Wilkens (1,332) and No. 1 Don Nelson (1,335).

Popovich is entering his 26th season as coach of the Spurs, extending his NBA record for longevity with one franchise.

He doesn’t have a lot of contemporaries in other sports, either.

Connie Mack managed the Philadelphia Athletics for 50 seasons. George Halas coached the Chicago Bears for 40 years (though not consecutively), John McGraw managed the New York Giants for 31, Tom Landry coached the Dallas Cowboys for 29, Curly Lambeau coached the Green Bay Packers for 29, and Don Shula coached the Miami Dolphins for 26.

They’re the only coaches in the four major U.S. leagues to spend as much time with a team as Popovich has with the Spurs.

Bill Belichick is the NFL leader in current tenure, in Year 22 with New England. Nobody else in the major pro leagues is even close to Popovich's total.

The NBA is celebrating its 75th anniversary this season. The league’s first game was Nov. 1, 1946, when the New York Knicks visited the Toronto Huskies, back in what was then called the Basketball Association of America.

Toronto and New York play on Nov. 1 this season, too: The Raptors visit the Knicks that night.

The top 75 players in league history will be unveiled in three 25-player blocks from Tuesday through Thursday.

The 60th anniversary of Wilt Chamberlain’s 100-point game is March 2; he had that night in Hershey, Pennsylvania, for the Philadelphia Warriors against the New York Knicks.

Philadelphia (the 76ers) will play the Knicks on March 2 this season as well, in Philadelphia, not Hershey.

But March 2, 1962, wasn’t the night that Chamberlain took ownership of the scoring record. He’d already had it for about three months at that point.

Chamberlain had 78 points on Dec. 8, 1961, for the Warriors in a loss to the Los Angeles Lakers, breaking the record of 71 points set about a year earlier by Elgin Baylor. So, this year -- again keeping with the 60th anniversary theme — the (now Golden State) Warriors are at home on Dec. 8, playing against Portland.

There are 29 players in the NBA this season with at least one Olympic gold medal, on 15 different teams.

Combined, those 29 players have won 36 golds. Anthony and Durant are three-time Olympic champions, while James, Paul and Green are two-time winners.

There are some reachable team won-lost marks to watch.

On the good side: Philadelphia is 51 wins away from 3,000 as a franchise, a milestone that only the Boston Celtics and Los Angeles Lakers have reached. And Toronto needs 18 victories to reach the 1,000-win mark.

On the not-so-good side: Detroit is 21 losses away from 3,000, which will have them joining Sacramento, Golden State and New York in that club.

He enters this season 1,892 points behind Kareem Abdul-Jabbar (14,211) for the Bucks’ franchise record there, which is certainly attainable in 2021-22 if Antetokounmpo plays close to a full season. He’s also 1,790 rebounds behind Abdul-Jabbar (7,161), which means that team record won’t realistically be his before the 2022-23 season.

This one, however, is well within reach: Antetokounmpo is a mere 39 blocked shots from matching Alton Lister (804) for the Bucks’ career record.

It may be time to eliminate Golden State, Chicago, Dallas, New York and Sacramento from NBA title contention.

They went undefeated in the exhibitions.

If any of those teams go on to win the 2022 NBA championship, it would mark the first time that a team went unbeaten in the preseason and won the title since the Chicago Bulls in 1992-93. The Bulls went 9-0 in exhibitions that year, though when that stretch was over Chicago center Bill Cartwright noted that “the preseason’s the preseason, and the season’s the season.”

The Bucks went 0-3 last year in the preseason and won the championship, so perhaps that’s good news for the Lakers (0-6), Portland (0-4) and Washington (0-4) — the only three teams to go winless in this year’s exhibitions.

But since the Bulls went 9-0 in the season in which they wound up winning a third consecutive title, a champion’s preseason has usually been most unremarkable. Since 1993, the average preseason winning percentage for eventual NBA champions has been .530.

Some other individual milestones to watch:

— Golden State’s Andre Iguodala is eight games shy of 1,200 for his career. The Lakers’ Carmelo Anthony is nine away from that milestone, and 200 field goals away from 10,000.