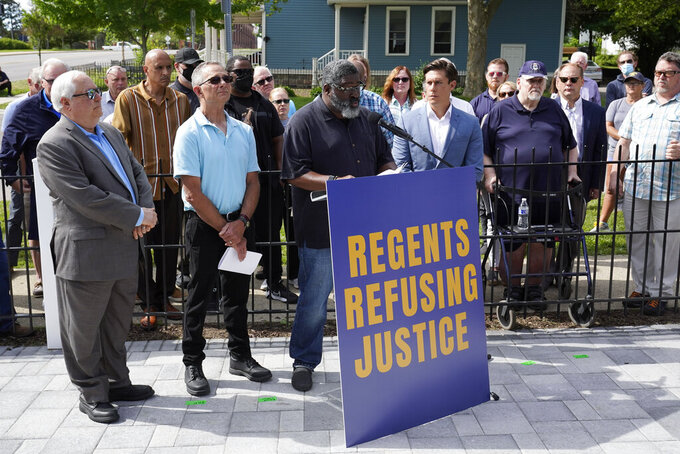 LANSING, Mich. (AP) — State lawmakers are poised to consider bipartisan bills aimed at helping potentially thousands of sex abuse victims sue for damages, including those molested by a University of Michigan sports physician.

It is the second time since 2018 that the Legislature may overhaul laws in the wake of a major abuse scandal. Similar legislation was enacted following the conviction of Larry Nassar, who sexually abused hundreds of female athletes under the guise of medical treatment, including at Michigan State University.

Under the new measures, victims of the late Dr. Robert Anderson at the University of Michigan and others would get additional time to bring lawsuits that might be barred by a statute of limitations. Government entities could not use the immunity defense if they knew or should have known of an accused's prior sexual misconduct and failed to intervene.

Similar government immunity legislation stalled three years ago — after Michigan State agreed to a $500 million settlement for Nassar's victims — amid pushback from universities, schools, municipalities, businesses and the Catholic Church over the financial implications of facing an unknown number of suits for old allegations. Opposition could form again.

“I'm not trying to push the scales of justice in one way or another. I just think that these survivors deserve their day in court,” said Rep. Ryan Berman, a Republican from Oakland County’s Commerce Township who is sponsoring the immunity bill.

The House Oversight Committee on Thursday will hold the first of likely multiple hearings on the measures. Among those expected to testify are former University of Michigan wrestler Tad DeLuca, who sparked an investigation when he told the university in 2018 what Anderson did to him in the 1970s, ex-football player Jon Vaughn and at least one Nassar victim.

“They get to tell their stories. I think they're so brave for doing that,” said Rep. Karen Whitsett, a Detroit Democrat whose bill would open a one-year window for sex assault victims to sue retroactively, regardless of the time limit.

“We need to empower survivors. They need to have a platform to be heard on. They need the tools to be able to do that,” she said.

The university has acknowledged that assaults occurred. A report by a law firm hired by the school found that officials failed to stop Anderson, especially in the 1970s, despite hearing about assaults. The university is in mediation with lawyers who are seeking a settlement for at least 850 people, mostly men.

Attorneys who have sued say the statute of limitations can be paused because the school “fraudulently concealed” the abuse for years. But the bills could provide the victims more certainty and increase pressure for a resolution.

Some protested last week outside a meeting of the university's governing board and called for more accountability by campus leaders.

“It will help the U of M victims. But it will also help so many men and women out there who may have been abused by a medical professional where, because of the knowledge imbalance between a doctor and patient, may not have found out or realized it for a number of years later,” Mike Cox, a former Michigan attorney general who is representing more than 150 of the plaintiffs, said of the legislation. “As a general matter, I think these bills are very good ideas.”