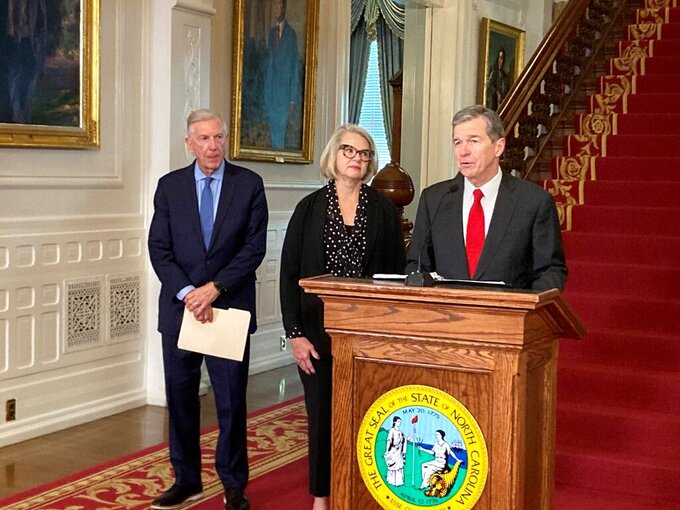 Gary D. Robertson, ASSOCIATED PRESS
North Carolina Gov. Roy Cooper speaks while former University of North Carolina system presidents Tom Ross, left, and Margaret Spellings listen at a news conference at the Executive Mansion in Raleigh, N.C., on Tuesday, Nov. 1, 2022. Cooper announced that Ross and Spellings would co-chair a Commission on the Future of Public Universities that would look in part and changing the governing structure of the university system and its 17 member schools. (AP Photo/Gary D. Robertson)

RALEIGH, N.C. (AP) — Gov. Roy Cooper on Tuesday announced a new commission tasked with making recommendations on changing how the boards guiding the University of North Carolina system and its 17 member schools are chosen, bidding to broaden their membership by political leanings, race and gender.

The Democratic governor essentially blamed the Republican-controlled legislature for contributing to problems within the governing structure of one of the country's leading public university systems — with 240,000 students and UNC-Chapel Hill and N.C. State University as its flagship campuses.

“The UNC system is the envy of the nation for what we have built here,” Cooper said at an Executive Mansion news conference. “But there are signs of trouble that come when all of the appointed leaders are chosen by too few ... we have an appointed university leadership that doesn’t come close to reflecting our diversity.”

As a reminder of partisanship he blames for the system's stumbling, Cooper stood beside commission co-chairs Tom Ross and Margaret Spellings, two recent UNC system presidents. Both got pushed out in different ways by previous editions of the UNC Board of Governors that were controlled by GOP-approved members.

“Our public universities, especially, must be places where every person feels welcome, heard and represented,” said Spellings, system president from 2016 to 2019 and a U.S. education secretary under President George W. Bush. “We must leave our unique self-interests — be they political, geographic or institutional — at the door and we must be what I call organized for success.”

For 50 years, the legislature has chosen the voting members of the system Board of Governors -- half elected by the House and the other half by the Senate. The board's membership was dropped recently from 32 to 24.

Critics have complained that representation by racial minorities and women on the Board of Governors falls short.

“We know the way university leaders are chosen must expand to reflect more of who we are,” said Cooper, who earned undergraduate and law degrees from UNC-Chapel Hill. “The system needs reform.”

Legislative officials were immediately cool to the commission’s work, which Cooper wants completed before the General Assembly’s chief work session concludes next year. Lawmakers would have to approve significant changes for them to be implemented.

The legislature likely will remain in GOP hands for the next two years after next week’s elections.

“Governance of higher education is constitutionally placed with the General Assembly,” Neal Inman, chief of staff to House Speaker Tim Moore, wrote in an email. “There is no interest in changing the structure of the UNC system, regardless of whatever report this politically-motivated commission produces.”

Republicans exercised their political might in the 2010s after they took control of both the state House and Senate by filling the board with like-minded members.

And weeks before Cooper was sworn in as governor in early 2017, the legislature passed a law eliminating Cooper’s ability to appoint some campus trustee board members and giving those choices to legislative leaders.

The governor said potential solutions could be to create board slots that are designated for the minority party at the General Assembly, or to give appointments to a broader swath of officials, such as community college leaders or the superintendent of public instruction.

A 2001 lawsuit led the Democratic-controlled legislature to remove board membership quotas for racial minorities, women and members of the General Assembly’s minority party.

If the commission recommends giving some appointment powers to the governor, Cooper said he'd ask that they wouldn't take effect until after he leaves office in January 2025.

But Senate leader Phil Berger said later Tuesday that “you’d have to be naïve to think the purpose of this ‘commission’ is to do anything other than recommend the governor obtain partisan appointments to university boards."

Ross, a former judge, Davidson College president and head of the Z. Smith Reynolds Foundation, was hired as system president in 2011 and announced his departure in 2015.

At the time of her announced departure as president, Spellings acknowledged conflicts with Republican board members made it the right time to leave. The board didn’t like some of her hiring decisions to lead individual campuses nor the system’s response to protests demanding the removal of a Confederate soldier statue on the UNC-Chapel Hill campus that was ultimately torn down by a crowd in 2018.

UNC-Chapel Hill’s trustee board also faced bad publicity in a 2021 tenure dispute with journalist Nikole Hannah-Jones, who won the Pulitzer Prize for her work on the 1619 Project.

Hans said in a written statement: “Disagreements over policy and governance are a fact of life, and we welcome public interest and accountability, as the University of North Carolina’s fundamentals have never been stronger.”