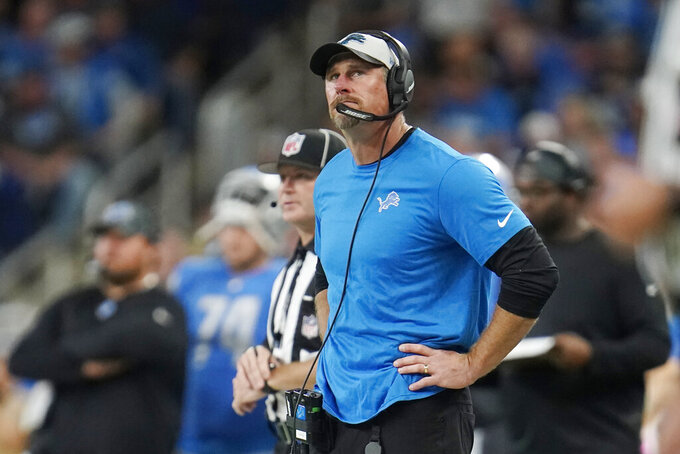 That's why the Detroit Lions coach took some time before attempting to grade his 0-6 team's performance in Sunday's 34-11 loss to the Cincinnati Bengals.

“It took a minute to step away from things and just calm down,” he said Monday. “You can't let your emotions play into it as you grade the tape. You have to look at it with open eyes and somewhat of a clean slate.

"You always need to find the positives and build from those.”

Campbell did find some bright spots: He was pleased with the way his young defense contained Joe Burrow and Joe Mixon in the first half. But he also saw a lot of major mistakes the Lions couldn't overcome.

“It's OK for me to say we're doing this well and we're not doing this well, but that's all irrelevant until we're able to clean up the missed assignments and penalties,” he said. "That's just shooting yourself in the foot, which means we don't have a leg to stand on until we clean them up.

“When we do that, maybe we're looking at 2nd-and-3 instead of 2nd-and-17, which gives us a better third down and lets us build on the things we're doing well.”

“It is always one thing here and one thing there,” he said, “We need to get on the same page and clean up all these little details. That's generally all it is.”

TE T.J. Hockenson has been the one offensive player able to give the Lions a chance to complete a pass for more than 6 or 6 yards. His 33-yard catch Sunday was Detroit's only play longer than 15 yards. Jared Goff missed him on what should have been a 38-yard touchdown.

Meanwhile, the wide receivers only had three catches for 22 yards before the Bengals switched to a prevent defense with a 27-0 lead.

The secondary allowed Burrow to put up 9.3 yards per attempt — the fifth time in six games the opposing quarterback has been over 9.0. That's an obvious problem no matter who you are facing, but the Lions are going up against Matthew Stafford on Sunday.

The former Lion is averaging 9.2 yards per attempt in the Rams' 5-1 start, second in the NFL behind Russell Wilson's 9.6.

“He's a very good quarterback with an explosive offense,” Campbell said. “Every game in the NFL is against a tough opponent, but he's going to be a huge challenge for us.”

CB Amani Oruwariye has three interceptions in four games while the rest of the defense has only picked off one pass this season.

“I'm always trying to be the guy who creates a turnover and gives our team a boost,” said Oruwariye, who had three interceptions in 27 career games before this stretch. “I'm just trying to be in the right place at the right time, and it has been working.”

Goff's inability to get the ball down the field is destroying the team's chance of putting up quick points. On Sunday, he completed 28 passes for just 202 yards, with 89 of those yards coming after the catch. With his average completion coming just 4 yards from the line of scrimmage, the Lions have possessions where two completions aren't enough to get a first down.

“I don't think defenses are doing anything to take deeper passes away from us,” he said Sunday. “I've just got to find a way to get the ball down the field. That's on me.”

DE Charles Harris is day-to-day with an oblique strain. He leads the team with four sacks, so losing him against Stafford would be another significant blow for a struggling defense.

0 — The Lions haven't taken a single offensive snap with the lead this season. They went ahead late in games against the Ravens and Vikings, only to have their opponents come right back to kick a winning field goal.

The Lions need to find a game plan that lets Goff have some success against his former team. That means solving one of the toughest problems in the game: stopping Aaron Donald.

“They've got the best defensive player in the league,” Campbell said. “We will have to find a way to get past him.”