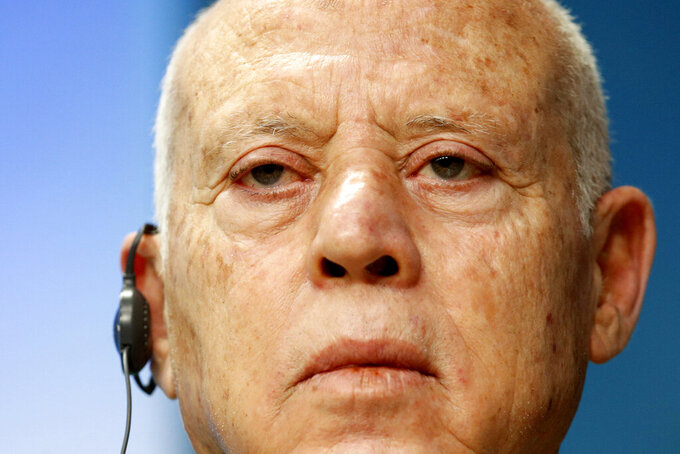 Johanna Geron, ASSOCIATED PRESS
FILE - Tunisia's President Kais Saied speaks during a media conference at an EU Africa summit in Brussels, Friday, Feb. 18, 2022. Tunisian President Kais Saied has unveiled a new draft constitution that will be submitted to a referendum on July 25, attributing broad powers to the president and limiting the powers of the prime minister and parliament. Several organizations, including the powerful central trade union, the UGTT, have deplored the absence of a public dialogue in preparing the new constitution. (Johanna Geron, Pool Photo via AP, File)

TUNIS, Tunisia (AP) — Tunisian President Kais Saied on Friday unveiled a new draft constitution that would bestow broad powers on the president and curtail the authority of the prime minister and parliament.

A referendum on the constitution is scheduled for July 25, exactly a year after Saied suspended parliament and seized power. He said the move was necessary to “save the country” from political and economic crisis. This prompted strong criticism from the opposition, which accuses him of a slide toward totalitarianism.

Several organizations, including the powerful UGTT central trade union, have deplored the absence of a public dialogue in preparing the new constitution that they have dubbed “the Constitution of Kais Saied."

The draft text, published late Thursday, would give the president greater executive power than the prime minister and establish a bicameral parliamentary system for the first time.

That would be a shift from the current constitution, which was seen as groundbreaking when it was passed in 2014 after consultations with multiple groups.

The 2014 constitution sought to limit presidential powers after the Arab Spring protests put an end to 23 years of unchallenged reign by former President Zine El Abidine Ben Ali. He was overthrown in 2011 by a popular revolt which triggered a similar movement in several countries of the region against autocratic leaders.

The new charter would give the president the right to appoint the prime minister and the ministers, and to fire them. It restricts presidents to two five-year terms.

The new draft constitution removes a reference to Islam in Article 1 of the old charter, which read that “Tunisia is a free, independent and sovereign state, Islam is its religion.”

The preamble to the new version says Tunisia is an integral part of the Islamic community and that the state ensures the protection of religious rights — as long as they do not undermine public security.

Saied and some others blamed Islamist party Ennahdha in part for Tunisia’s political crisis last year. Ennahdha, which dominated parliament before it was suspended, is among Saied’s fiercest critics.

Like the previous one, the draft new constitution guarantees freedom of worship and conscience, as well as individual and public freedoms and freedom of opinion and media.

It also guarantees unions’ rights to strike except for the army, police and judges and other magistrates. Saied has been in a showdown for weeks with judicial officials who have been on strike following the dismissal of 57 judges, some of whom are accused of corruption and obstruction of justice.

The new charter would also create a second house of parliament called the “national council of regions and districts” that’s meant to ensure balance between the regions.

If adopted in the July 25 referendum, the new constitution would enter into force as soon as the results of the vote are announced.