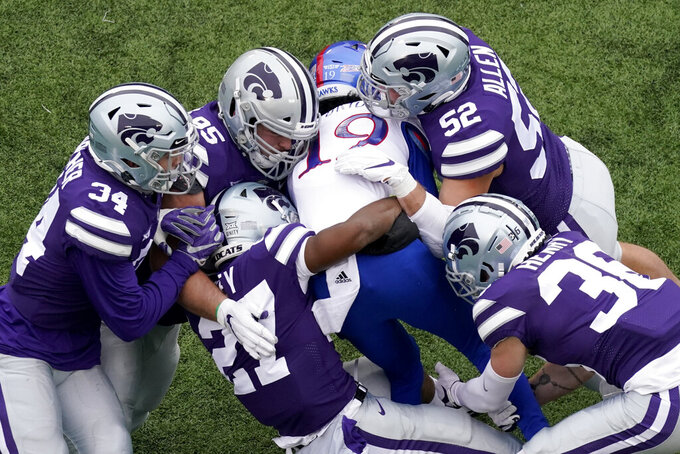 Charlie Riedel, ASSOCIATED PRESS
FILE - In this Oct. 24, 2020, file photo, Kansas wide receiver Steven McBride (19) is tackled by a group of Kansas State defenders during the second half of an NCAA football game in Manhattan, Kan. The Big 12 will have nothing like the Red River rivalry on the second Saturday in October once Texas and Oklahoma make their move to the Southeastern Conference. There will even be the renewal of some old but not as long standing feuds, and maybe some new ones when BYU, Central Florida, Cincinnati and Houston begin Big 12 play within the next two to three seasons. (AP Photo/Charlie Riedel, File)

The Big 12 will have nothing like the Red River rivalry on the second Saturday in October once Texas and Oklahoma make their move to the Southeastern Conference.

But even when the passionate fans in crimson and burnt orange are split 50-50 at historic Cotton Bowl Stadium during the State Fair of Texas under a different conference logo, there will be some remaining rivalries in the Big 12, several dating back well more than a century.

There will even be the renewal of some old feuds, and maybe some new ones when Cincinnati, BYU, Central Florida and Houston begin Big 12 play within the next two to three seasons. At the least, Cincinnati and Texas Tech can settle that 10-10 tie they played to in 1968 in their only meeting.

An early preview of one of the potential new rivalries comes Oct. 16 when BYU plays a previously scheduled non-conference game at Baylor. It will be the first meeting between the world's largest Baptist university and largest Mormon-affiliated school since 1984, when the Cougars won an early-season matchup on the way to their undefeated national championship.

BYU, in its 11th season as a football independent, will play one more season before officially joining the Big 12 in 2023.

Dana Holgorsen, who oversaw West Virginia's transition from the Big East to the Big 12 a decade ago, could find himself coaching against his old team if he is still with Houston for its move with Cincinnati and UCF from the American Athletic Conference by no later than 2024. He left the Mountaineers for the Cougars after the 2018 season.

At least West Virginia is getting a regional foe in Cincinnati. Those two schools are located only about 300 miles apart.

West Virginia, currently the geographic outcast of the Big 12, and Cincinnati played every year from 2005-11 as Big East members. Their renewed series may become more pronounced on the basketball court as long as Mountaineers coach Bob Huggins sticks around. He led the Bearcats from 1989 to 2005.

The Mountaineers own a 16-3-1 series lead on the football field, but all three of those Cincinnati wins came this century, including in 2009 when the Bearcats went 12-1.

Houston was in the old Southwest Conference from 1976-95, so has past connections with Baylor, TCU and Texas Tech.

Texas Tech won its season opener this year over Houston in only their fifth meeting since the end of SWC. TCU and Houston also overlapped in Conference USA from 2001-04 along with Cincinnati, but their only other meeting was in the 2007 Texas Bowl.

UCF, an FBS team since 1996, has played only four games against the remaining eight Big 12 members it will be joining. The only win for the Knights was over Big 12 champion Baylor in the Fiesta Bowl in 2014, just before the start of the current four-team College Football Playoff and New Year's Six games.

Current Big 12 team Iowa State has the fewest games against the incoming schools, going 4-0 against BYU between 1968-74. Kansas has only six such games, but won five of them, including wins over BYU in the 1992 Aloha Bowl and Houston in the 2005 Fort Worth Bowl.

The Jayhawks are part of the most-played Big 12 rivalry, with their 118 meetings and a 64-49-5 lead over Kansas State in the Sunflower Showdown that was first played in 1902 and resumes Nov. 6. The instate rivals have been in the same conferences since 1913, from the Missouri Valley Athletic Association to the Big Six, Big Seven, Big Eight and Big 12.

Iowa State has century-old series against both Kansas schools, including the Farmageddon matchup against K-State that will be played for the 105th season in a row on Oct. 16. The Cyclones are coming off a 59-7 home win over Kansas last week in their 101st meeting.