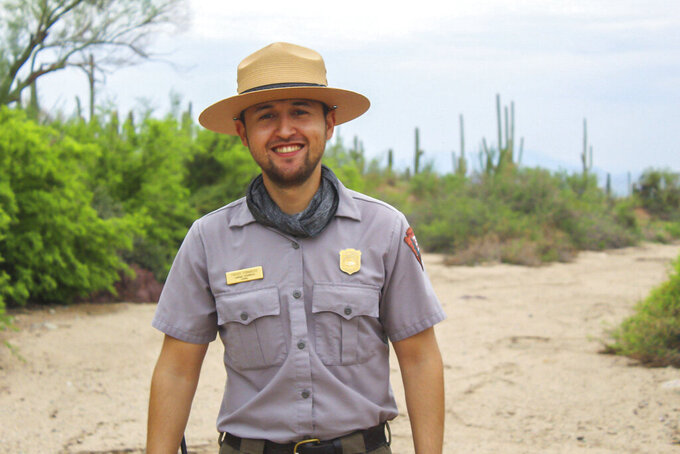 Sofia Krusmark, ASSOCIATED PRESS
Park Ranger Freddy Fernandez-Ramirez describes the washes in Saguaro National Park Ariz., as the "desert's highway." He spends a lot of time exploring these areas in the Tucson park. The 30-year-old was recruited eight years ago as part of an effort to get younger generations involved in national parks. (Sofia Krusmark/The Arizona Republic via AP) 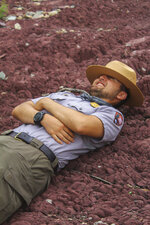 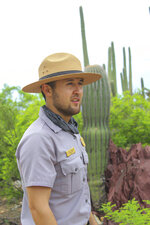 PHOENIX (AP) — It would be hard to find anyone who loves his job more than Freddy Fernandez-Ramirez, who claims to bleed “Sonoran green.”

The 30-year-old ranger at Saguaro National Park in southern Arizona was recruited eight years ago as part of an effort to draw younger generations to national parks. His social media videos showing him eating prickly pear fruit, excavating a desert tortoise habitat and safely removing cholla cactus from his skin have given viewers a slice of desert life.

“It just doesn’t get better than this for me,” Fernandez-Ramirez told the Arizona Republic. “I can spend my whole life here, which I plan on doing. This is my home.”

The videos started in February when public tours were discontinued because of the pandemic, said Jordan Camp, a park guide who manages the park's Instagram account. Videos released at the end of the work week, dubbed Freddy Fridays, engage the audience far more than other posts.

The videos are part educational, part entertainment. They also highlight a region that has shaped Fernandez-Ramirez's life.

His family's roots in the Sonoran Desert go back 200 years when his ancestors moved to a small village in Mexico. He was the first in his family to be born in the U.S., first living in Los Angeles then in Tucson. He spent summers in Rayón, Sonora, with his sister and grandparents as his mother worked several jobs.

His grandparents' love for the desert rubbed off on him. They showed him tarantulas, rattlesnakes and scorpions, and took him swimming in the river. He learned how to live off the land.

The visits were less frequent during his teenage years. But as he became an adult, he rekindled his love for the desert and found Saguaro National Park.

Fernandez-Ramirez volunteered and interned at the park for years before becoming a ranger in 2017. Staff know him as a “walking encyclopedia” for the knowledge he's built up in the job and during his free time.

He can tell visitors the GPS coordinates to a specific saguaro or where they can spot an animal they've never seen before. He also helps Spanish speakers navigate the park, many of whom are looking for diverse representation, he said.

While most people who train to be rangers move seasonally to national parks around the country, Fernandez-Ramirez wanted to stay put, said Andy Fisher, the park’s chief of interpretation. Saguaro National Park is where Fernandez-Ramirez prays the rosary as he once did with his grandma, where he learned of his grandpa's death, where he proposed to his wife and where he leads his daughters on nature walks.

“We kept working hard to find opportunities for him here. He’s so passionate," Fisher said. "His blood must run Sonoran-colored green. This is his home and he loves to share it with people.”