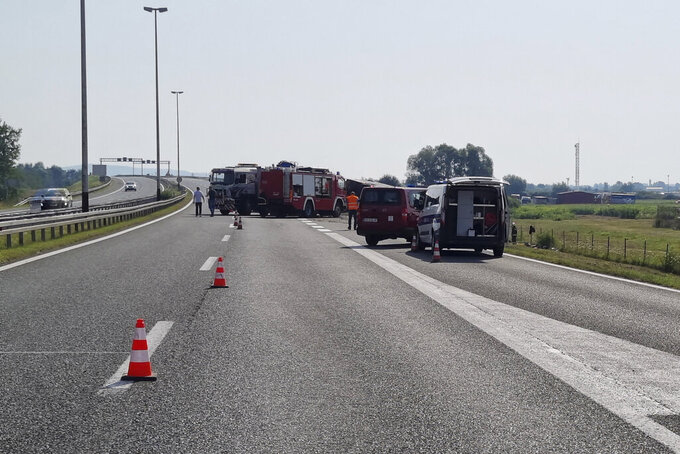 PRISTINA, Kosovo (AP) — Some of the survivors of a deadly bus crash in Croatia flew home to Kosovo on Tuesday to a welcoming crowd at the country's international airport at the capital, Pristina.

A plane flew in from Osijek, Croatia, bringing 21 ethnic Albanian Kosovars to Adem Jashari airport two days after the bus crash that killed 10 people and injured 43.

One of the arriving survivors was taken by an ambulance minivan to the hospital due to health concerns. The others left in cars with relatives or with vehicles offered from the government.

Fifteen others are still in Croatian hospitals, one in grave condition, Health Minister Arben Vitia said. The coffins with eight dead from the crash were expected to arrive Wednesday, according to Interior Minister Xhelal Svecla.

The bus carrying 67 passengers and two drivers swerved off a highway while traveling from Frankfurt, Germany, to Kosovo early Sunday. Croatian authorities said the driver behind the wheel at the time had dozed off and lost control. The driver is under a 30-day detention in Croatia.

Kosovo observed a day of mourning with flags at half-staff and parliament postponed its session Monday in memory of the 10 dead Kosovars.

Kosovo has a huge diaspora in Germany whose remittances are a major resource for their families and the country’s economy.

“We lost part of our spirit, part of that which is the backbone and our permanent pain: the exiled persons,” the president said in a joint statement with the speaker and the prime minister.