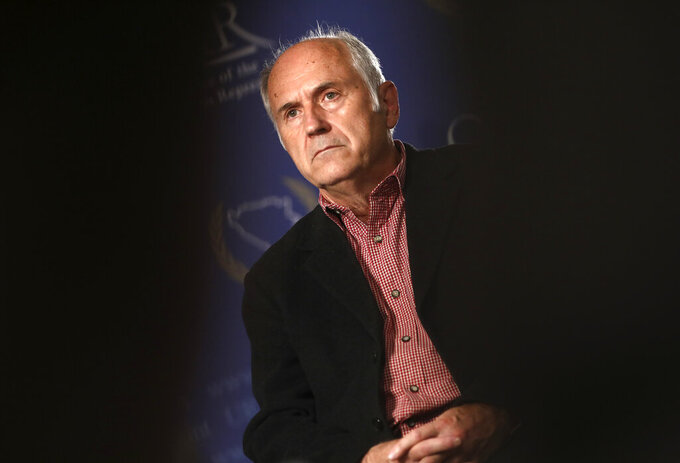 Uncredited, ASSOCIATED PRESS
Valentin Inzko, the outgoing head of Bosnia's Office of the High Representative, or OHR, listens to a question during an interview with the Associated Press, in the capital Sarajevo, Bosnia, Monday, July 26, 2021. Bosnia’s outgoing top international overseer has urged the Western powers to urgently adopt a new approach to the politically fragmented post-war country to stop its “not sincere” nativist leaders from turning it into a deserted wasteland. (AP Photo)

SARAJEVO, Bosnia-Herzegovina (AP) — Western powers should adopt a new approach to promoting reconciliation in politically fragmented Bosnia to prevent nativist leaders from turning the Balkan country into a deserted wasteland, according to the top international overseer of a 1995 peace agreement.

Austrian diplomat Valentin Inzko, who is stepping down next week as the U.N.'s high representative in Bosnia, said he thinks a hands-off attitude the international community adopted a little more than a decade ago to promote local autonomy has failed to produce the intended unity, in part because Bosnian political leaders “are not sincere.”

The Office of the High Representative, which Inzko has led since 2009, was charged with shepherding the implementation of the peace agreement that ended Bosnia's devastating 1992-95 interethnic war. The U.S.-brokered Dayton agreement established two separate governing entities in Bosnia — one run by Bosnia’s Serbs and another one dominated by the country’s Bosniaks, who are mostly Muslims, and Croats.

The two entities are linked by joint institutions, and all actions taken at a national level have to be reached by consensus of the three ethnic groups. In the immediate post-war years, the international community kept Bosnia on a reform course, pressuring its leaders to accept painful compromises in return for financial and other support.

But by 2009, “the international community decided that the presence of the Office of the High Representative has to be scaled down, that there should be ‘less Dayton and more Brussels,’” Inzko said, using a common phrase for a policy intended to give Bosnian leaders more ownership of the country's future and a task to deliver clearly prescribed reforms to secure the nation's eventual membership in the European Union.

Instead, the policy has spectacularly failed, the diplomat said. Throughout his time in Bosnia, Inzko said, the state's joint institutions were “under attack constantly.”

Since 2015, Bosnian Serbs have challenge the authority of Bosnia’s Constitutional Court, but Inzko fought off their repeated attempts to expel three foreign judges, elected by the European Court of Human Rights, who serve on its bench under the terms of the peace agreement.

Bosnian Serbs, in particular, have used the international step-back to call into question the country’s continued existence and to stoke ethnic tensions by downplaying or denying the crimes committed by their ethnic kin during the war. But political elites of all ethnic stripes have gladly taken control of all levers of government for the benefit of their partisan loyalists.

“Half a million people have left (Bosnia) in the last 15 years, many of them are the brightest, and we do not want to have this country to be an empty country where just politicians live and pensioners, retired people,” Inzko said. “We cannot afford to do nothing.”

With the time of his tenure running out, Inzko last week used the full authority of his office to outlaw genocide denial and the glorification of war criminals in Bosnia. He imposed changes to the criminal code that call for prison sentences of up to five years for individuals convicted of those crimes. It was the first time in 12 years he had gotten to use the high representative's so-called “Bonn powers.”

In response, Bosnian Serbs have pledged to block decision-making in the country’s institutions. Warning of the growing influence of China and Russia, which largely support the divisive Bosnian Serb leaders and want to see the Office of the High Representative abolished, Inzko said, “There is not much time left.”

“I would really like to beg the European Union to inject a sense of urgency into this issue because people cannot wait forever. (The EU membership) perspective is too far away….The situation on the ground is not improving.”

Inzko nevertheless expressed confidence in his successor, German diplomat Christian Schmidt, and in Bosnia, where he said ordinary people “live together, they cooperate….This is functioning.”

Schmidt was appointed in May as the next high representative by the Ambassadors of the Steering Board of the Peace Implementation Council, the international body guiding Bosnia’s peace process, and is scheduled to take over the position on Aug. 1.