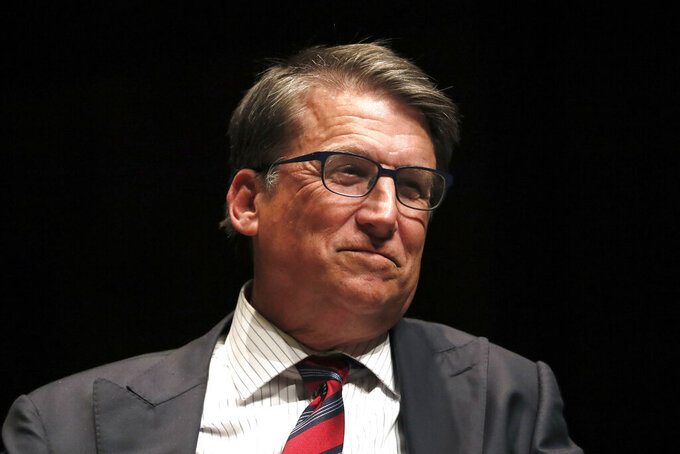 RALEIGH, N.C. (AP) — Former Republican Gov. Pat McCrory on Wednesday announced he'll run for the U.S. Senate in North Carolina, shaking up the calculus in the expanding field to succeed retiring Sen. Richard Burr with the entrance of a veteran of statewide politics.

McCrory, who served as governor for four years through 2016, revealed his plans on his morning WBT radio show in Charlotte, where he also served a record 14 years as mayor. McCrory had said in late 2019 that he would strongly consider a Senate bid in 2022. He has quietly built a team of experienced political staff, led by the consultant who helped Burr and North Carolina Sen. Thom Tillis win.

“I’m no doubt the best one for the job based upon all the candidates who are even thinking about running, because I’ve actually had to make some tough decisions,” McCrory told The Associated Press in an interview later Wednesday, citing his past electoral history of dealing with crises, budgets and security. “Washington right now is just broken and it needs fixing. And I think they need someone from outside of Washington ... who’s actually been a problem solver and done the job.”

McCrory enters the campaign as the most well-known among any announced candidate, surging past recent U.S. Rep. Mark Walker, who unveiled his bid in December to try to secure early GOP primary support. Current U.S. Rep. Ted Budd and Lara Trump, the daughter-in-law of Trump and a North Carolina native, also are considering runs for the Republican nomination.

“He has shown that he can win statewide office," Cooper said. He also noted that McCrory's radio program, in which the former governor focuses on the latest political news, has offered good preparation: “He’s been doing as much training as anybody could in running for the Senate.”

2020 Senate primary candidate Erica Smith and current state Sen. Jeff Jackson are among several Democrats competing for the opportunity to take back the seat held by the Republican Burr since 2005. Former state Supreme Court Chief Justice Cheri Beasley also is expected to join the field soon. Burr announced years ago that his third six-year term would be his last. A Democratic victory would help a party clinging to a small edge in the Senate in which Vice President Kamala Harris can break tie votes.

In a video announcement, McCrory emphasized that 50-50 split in the Senate, adding that the Harris vote is “giving the left everything they want to radically change America for generations to come.”

“It’s time we join together and take back the Senate from Kamala Harris,” McCrory says in the video. Harris, however, has yet to cast many votes that have granted the policy wishes of far-left Democrats.

McCrory, 64, has been on the sidelines of hard-nosed state Republican politics since losing his gubernatorial reelection by barely 10,000 votes to current Democratic Gov. Roy Cooper in 2016. He ran for governor two other times, losing in 2008, and winning in 2012. His Senate candidacy means he will no longer host the radio show.

The ex-governor will have to maneuver carefully in regards to Donald Trump, who also won North Carolina’s electoral votes in 2016. Trump remains very popular among the GOP faithful and continues to promote unsubstantiated accusations of voter fraud during the 2020 election.

McCrory said in the AP interview he had already stated his criticism about some of Trump's post-election narrative. McCrory at times also criticized Trump during the 2016 election.

McCrory said Wednesday he hoped “to have a good discussion” with him but stopped short of saying whether he would expressly seek the ex-president's endorsement.

“I'm not going to be diverted by talking about the past because I care about the future," McCrory said, calling himself a “McCrory Republican" who supported Trump policies on immigration, foreign policy and the Supreme Court.

Walker, meanwhile, has embraced Trump, calling himself the most “pro-Trump congressman” from North Carolina when on Capitol Hill. A Lara Trump candidacy, with a likely endorsement from her father-in-law, would turn the GOP primary upside down.

McCrory's gubernatorial term was marked by working with the Republican-dominated legislature to pass a massive tax overhaul, transportation funding reform and vouchers for low-income children to attend private schools. He said his policies helped begin a “Carolina Comeback” economic recovery.

But he was blistered in the final months of his failed reelection bid for agreeing to sign the legislature's 2016 “bathroom bill,” which required transgender people to use public bathrooms aligned with the gender on their birth certificate.

McCrory defended House Bill 2, making him the face of the law among LGBT activists and the public. Several large corporations and sports leagues relocated events to other states or reconsidered expanding in North Carolina due to the law, which was partially repealed in 2017. While McCrory was praised by social conservatives when he signed HB2 and laws restricting abortion, he's a political product of the Republican Party's moderate, business-oriented wing.

National and state Democrats immediately jumped on McCrory's entry. McCrory is “a failed politician who signed hateful and divisive legislation into law, hurt our national reputation, and damaged our state’s economy,” state party Chair Bobbie Richardson said in a news release. "We have some free advice -- don’t quit your day job, Pat.”

Asked whether he regretted how he handled HB2 five years ago, McCrory said the issue has been resolved: “I’m glad the state’s moved on and I’ve moved on, too.”