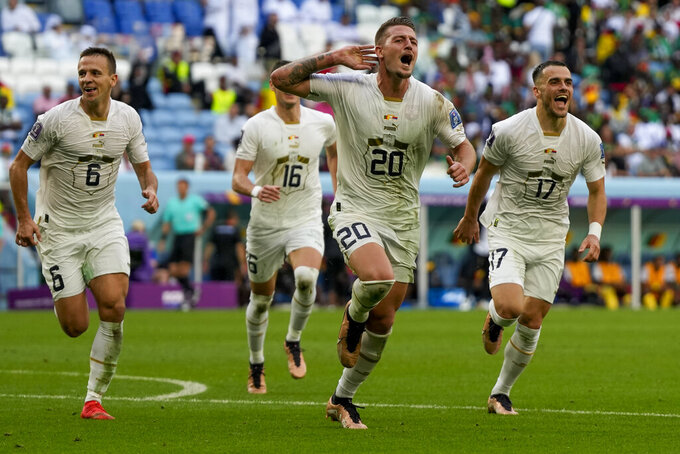 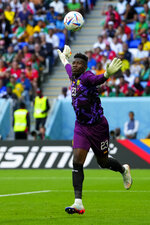 AL WAKRAH, Qatar (AP) — Cameroon staged an impressive comeback in a 3-3 draw against Serbia at the World Cup despite replacing its goalkeeper at the last minute.

Andre Onana, who plays for Italian club Inter Milan, wasn't in Cameroon's lineup or even at the stadium to watch the Group G match.

Coach Rigobert Song said he dropped his starting goalkeeper for “disciplinary reasons,” but didn't give any specifics.

“In a group you need to respect the rules that apply to everybody, and I prefer to ensure that the team takes precedence over individuals,” Song said. “If you can’t fit in with what’s required to be part of a squad, then I do think that you need to step up to the plate and accept responsibility for that.”

Song replaced Onana with Devis Epassy, who made only his sixth international appearance.

“I took a risk, I realize that," Song said. “Maybe we’re going to have to explain what happened later."

Song said Onana hasn’t been kicked out of the squad and didn't rule him out of Cameroon’s last group stage match against Brazil on Friday.

“For the time being I’ve asked him to wait and we’ll see if he’s going to stay with us,” Song said. “It’s up to him as well to a certain extent. He’s going to have to agree to respect the rules to perhaps come into the squad.”

Onana, who has 34 international caps made no comment on the decision except posting the starting lineup, with his notable absence, on Instagram.

Epassy said he found out Sunday night he would replace Onana, who offered him encouragement.

“We don’t have any problem together,” Epassy said. “It’s my role to be ready.”

Cameroon was down 3-1 but second-half substitute Vincent Aboubakar turned the game with a goal and an assist.

He lobbed Serbia goalkeeper Vanja Milinkovic-Savic in the 64th minute to score his 34th goal for the Indomitable Lions, and set up striker Eric Maxim Choupo-Moting two minutes later for the equalizer.

“The lion roared today," Aboubakar said. “I dedicate this result to the squad, and to the people of Cameroon.”

The thrilling draw was the first game at the World Cup in Qatar in which both teams gave up a lead.

But the result suited neither side.

They each have one point after two Group G matches, two points behind Switzerland after the Swiss lost 1-0 to Brazil later Monday. The win sent the record five-time World Cup champions into the last 16 with a match to spare.

Cameroon took the lead in the first half through central defender Jean-Charles Castelletto's 29th minute tap-in but then conceded twice in quick succession in stoppage time. Strahinja Pavlovic's headed in a free kick to level the score before Sergej Milinkovic-Savic struck from 20 meters just two minutes later.

Striker Aleksandar Mitrovic made it 3-1 at the start of the second half after Serbia opened Cameroon's defense with a series of quick passes.

Aboubakar came on shortly after and led Cameroon's comeback.

“We were not smart enough to finish the match to our own advantage,” Serbia coach Dragan Stojkovic said. “We have to be fully concentrated and we need to be on a higher level, especially in our backline because such mistakes should not be made and not repeated anymore.”

Both sides lost their opening games, with Serbia beaten 2-0 by Brazil and Cameroon losing 1-0 to Switzerland.

Aboubakar top-scored at the last African Cup of Nations with eight goals. But this was his first international goal since that tournament and it improved the 30-year-old forward's total to 34 international goals.

He moved one ahead of Patrick M’Boma into third place among the nation's all-time leading scorers, behind 1990 World Cup star Roger Milla (43) and Samuel Eto'o (56).

Switzerland needs a win in the last match against Serbia to guarantee its spot in the next stage. A draw may be enough depending on the match between Brazil and Cameroon, which is third ahead of last-place Serbia on goal difference.