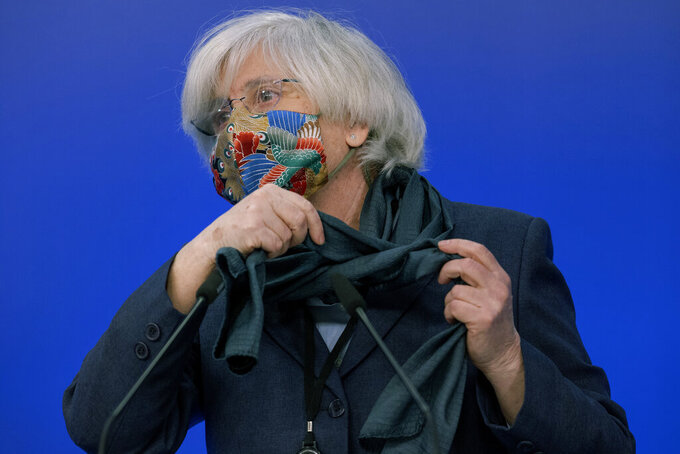 Olivier Matthys, ASSOCIATED PRESS
FILE - In this Wednesday Feb. 24, 2021 file photo, former Catalan education minister Clara Ponsati prepares to address a media conference at the European Parliament in Brussels. A Scottish court has on Thursday, Aug. 26, 2021 dismissed extradition proceedings against a Catalan politician sought by Spain over Catalonia’s failed independence bid. Clara Ponsati was accused of sedition over her role as education minister in Catalonia’s unsuccessful 2017 effort to secede after a referendum that was not sanctioned by the Spanish government. (AP Photo/Olivier Matthys, file)

Clara Ponsati was accused of sedition by Spain over her role as education minister in Catalonia’s unsuccessful 2017 effort to secede, which involved a referendum that wasn't sanctioned by the Spanish government.

A former academic at the University of St. Andrews, she won a seat in the European Parliament in 2019 and later moved to Brussels.

A Scottish judge, Sheriff Nigel Ross, ruled Thursday that Scottish courts had “no jurisdiction” in the case because Ponsati had indicated she didn't plan to return to Scotland.

“You can’t extradite someone who is not here,” he said, dismissing the case.

Scottish government lawyers didn't contest the decision, but said Ponsati had committed a “clear breach of (her) position of trust” by failing to tell the court she was resigning her post at St. Andrews and moving to Belgium.

In the European courts, Ponsati and two other former top Catalan officials are fighting attempts to remove the parliamentary immunity they have as EU lawmakers.