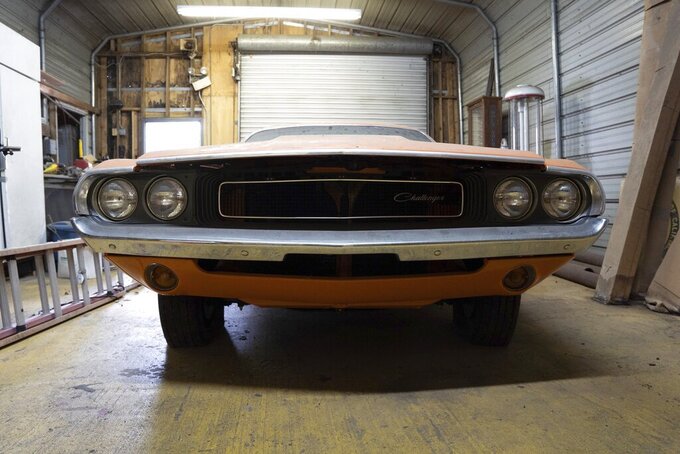 Angelica Edwards, ASSOCIATED PRESS
ADVANCE FOR PUBLICATION ON SUNDAY, NOV. 20, AND THEREAFTER - A 1970 Dodge Challenger owned by Leroy Gonzalez, a real estate developer and car enthusiast who died in January at the age of 84, is parked near his office Nov. 7, 2022, in Seffner, Fla. Several cars in his collection will be auctioned off on Dec. 3. (Angelica Edwards/Tampa Bay Times via AP)

SEFFNER, Fla. (AP) — Growing up as the son of a West Tampa body shop worker, Leroy Gonzalez was envious of people who drove nice cars.

“He had little, and they seemed to have everything,” said Richard Gonzalez, his son. “So, my dad told himself that he’d buy nice cars when he had money.”

Gonzalez died in January at 84, having accumulated modest wealth as a real estate developer. He was also a racetrack proprietor and car show promoter, might have had a link to the Cuban Missile Crisis and owned 14-foot fiberglass sharks. He can safely be described as a little eccentric.

Gonzalez lived up to his childhood promise by purchasing more than two dozen classic cars. Some remain in pristine condition. Others need work — a 1930 Ford pickup is in three pieces.

All will be auctioned at his Seffner ranch on Dec. 3.

“He loved red Fords and Corvettes from the ‘60s,” said John Harris, the auctioneer and Gonzalez’ best friend. “He knew what he liked, and he went after them.”

But neither Harris nor Richard Gonzalez were aware of the size of the collection. Gonzalez kept half the collection, mostly the Corvettes, at his Seffner office. The other half was hidden on his ranch in five barns built for the cars.

“I had never been inside the barns until after he died and then my jaw dropped,” Harris said. “He was a good friend but was a private man.”

Gonzalez started to repair a few but did not finish.

With others, he never had the titles transferred to his name.

“He drove them right off the lot to the barn,” Richard Gonzalez said. “I knew he bought them but had no idea he still had them. He never talked about them. For my dad, it was about the chase. He found the car and then moved on to the next one. It wasn’t about getting them to brag. He just wanted to get them.”

Added Harris, “That defines who he was. He had gasoline in his veins and was always chasing something great.”

As a kid, Gonzalez hung out with Tampa native Don Garlits, the drag racing legend credited with popularizing the sport.

“Don was a few years older,” Harris said, “so he’d pick up Leroy and they’d work on cars all day.”

In his early 20s, Gonzalez and a friend purchased a louver press, which punches holes in a car body to help hot air escape the racing engine. “They took it all over the country, especially to car shows,” Richard Gonzalez said. “That’s when he found his love for car shows.”

Back in Tampa, he started his own. Called World of Wheels, it was held annually from the mid-1960s through the early 1980s at downtown’s Curtis Hixon Hall and the Florida State Fairgrounds.

A 1975 advertisement for a World of Wheels event lists marque attractions as a racing Corvette that competed in the 24 Hours of Daytona endurance race, an offshore power boat owned by professional wrestler Mike Graham and a 1910 Rolls Royce made for England’s King Edward VII, who died before it was delivered.

“At one point, I remember we had 11 custom cars for the show in my driveway because we didn’t have anywhere to put them,” said Richard Gonzalez, 56. “We had the Munsters car. We had a car driven by Don Prudhomme,” who is a hall of fame drag car racer. “I was just a little dude who took it for granted. I thought that was normal.”

From 1964 to 1970, Gonzalez owned the Twin City Dragway. The Oldsmar track was rundown and in need of repairs. Gonzalez funded a two-story timing tower, paved the pit lanes and worked to have the track sanctioned for NASCAR special points meets, according to news archives.

“He also said he once had something to do with a dragway in Miami,” Richard Gonzalez said. “Every time we would start drinking, he’d tell me the story of when he pulled up to open that dragway one early morning to find the National Guard had gone inside without permission to set up missiles pointed at Cuba during the missile crisis.”

As for those fiberglass sharks: There are two of them, and they are also part of the auction.

In the 1970s, Ford dealerships throughout the southeast paid Gonzalez to bring one of the sharks to their showrooms as a promotion.

“They’d advertise for people to come see the giant shark,” Richard Gonzalez said. “They would sell more cars on those weekends than any other.”

Gonzalez told crowds that the sharks were modeled after a real one that a friend harpooned from a helicopter in San Diego.

“Do you know what would happen to the helicopter if that happened?” Harris laughed. “Boom, right into the water. But it was a great story.”

Through all his exploits, Gonzalez leafed through trade publications and newspapers, surfed the internet and researched auctions in search of classic cars to add to his collection.

“One time he drove to Oklahoma with a buddy for a ’56 Lincoln,” Richard Gonzalez said. “They’re pulling it with a U-Haul dolly at 80 mph when the straps came off. They don’t know how long it was but figured another two or three miles and the car would have been gone.”

That car is in the auction.

Another time, Gonzalez drove to Georgia for a 1970 orange Challenger.

“The owner also did body work, so dad paid him to paint the body and do the interior,” Richard Gonzalez said, “and figured he’d do the motor himself.”

He never did. Instead, Gonzalez focused on finding another car.