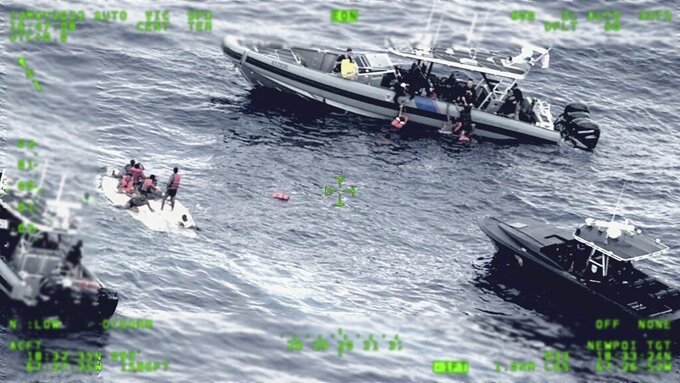 Uncredited, ASSOCIATED PRESS
This photo released by the Seventh U.S. Coast Guard District shows people standing on a capsized boat, left, as some of its passengers are pulled up on to a rescue boat, top, in the open waters northwest of Puerto Rico, Thursday, May 12, 2022. Some people have been rescued while others were found dead after the boat carrying suspected migrants capsized. The boat was first spotted by U.S. Customs and Border Protection. (Seventh U.S. Coast Guard District via AP)

SAN JUAN, Puerto Rico (AP) — The U.S. Coast Guard announced Monday that it suspended the search for potential survivors of a capsized boat near Puerto Rico after finding 11 bodies and rescuing 38 migrants from a vessel that had carried an estimated 60 to 75 passengers.

Crews searched the waters north of uninhabited Desecheo Island, which lies west of Puerto Rico, for four days. All 11 victims were Haitian women and 36 of the 38 survivors were Haitians. The remaining two were from the Dominican Republic, officials said.

“Our most heartfelt condolences to the families, friends and loved ones of those who did not survive or remain missing,” said Capt. Gregory Magee, commander of the San Juan Coast Guard sector. “These crews have done their utmost to ensure that if there were any more survivors, that they would have had the best chance to be rescued.”

Federal authorities announced Monday that they filed charges against Fermín Montilla, a 43-year-old man from the Dominican Republic accused of smuggling Haitian migrants aboard the boat that capsized. It was not immediately clear if he had an attorney.

Rescue efforts began on Thursday after a U.S. Customs and Border Protection helicopter spotted the capsized boat while on patrol.

Authorities have reported a big increase in recent months in the number of Haitian migrants fleeing their country, which is struggling with a spike in brutal gang violence, political instability and a crumbling economy.