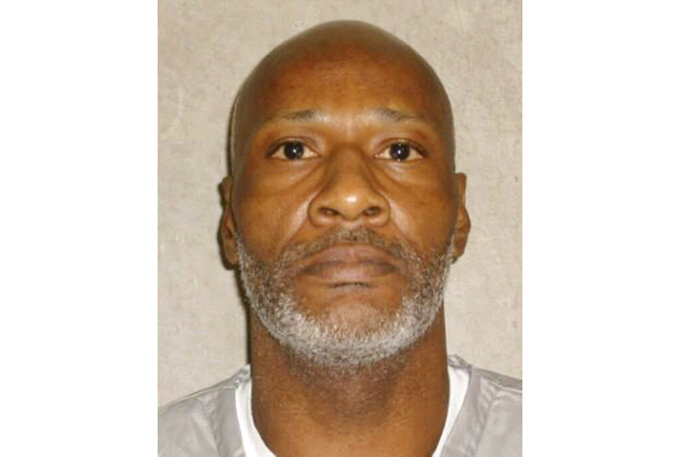 OKLAHOMA CITY (AP) — Oklahoma’s Pardon and Parole Board narrowly rejected clemency Tuesday for a death row inmate convicted of killing a prison cafeteria worker in 1998, paving the way for the state's first execution in more than six years.

The five-member board voted 3-2 to reject recommending the governor grant clemency to John Marion Grant, 60, who is scheduled for lethal injection on Oct. 28. It would be the first execution in Oklahoma since a series of problematic lethal injections in 2014 and 2015 led to a de facto moratorium.

Grant was convicted of murder and sentenced to death for killing 58-year-old Gay Carter at the Dick Conner Correctional Center in Hominy. A different five-member parole board unanimously rejected clemency for Grant in 2014.

Grant’s attorneys did not dispute that he dragged Carter into a mop closet and stabbed her 16 times with a homemade shank, but said he received ineffective trial counsel because his lawyers never properly presented mitigating evidence to the jury, such as his difficult childhood.

“We are asking the board today to come with open minds and open hearts to hear the whole story that should have been presented at trial," said Grant's attorney, Sarah Jernigan. “We ask for mercy. We ask for clemency. And we ask that you hear about his life and the circumstances that led to this crime."

Jernigan said Grant was one of nine children who grew up without a father in abject poverty, including a home with a dirt floor and no running water. He ended up in a juvenile detention facility at age 12 during the 1970s when Oklahoma's juvenile justice system was among the worst in the country, she added.

Grant served multiple stints in prison and jails, and was serving time for armed robbery when he killed Carter. Jernigan also told board members that Grant is in poor health and is no longer a violent person.

Grant himself opted not to address the board from the Oklahoma State Penitentiary, a decision Jernigan attributed to the stress and pressure involved.

“I think he doesn't want to put himself in a position where he has to revisit the trauma of his past," she said, adding that he is remorseful for the killing.

Attorneys for the state, however, argued that Grant's conviction has been reviewed by numerous courts and that he continued to be a threat to other inmates and staff in the years since Carter's killing. Former Assistant Attorney General Joshua Lockett said Grant assaulted another inmate on death row in 2005 in an attack that required stitches, and he threatened prison workers in 2008 and 2009.

“This individual has not changed. He’s still the same," Lockett said. “Because of that, we would ask you to deny clemency."

The board also heard a tearful plea from Carter's daughter, Pam Carter, who urged the panel to reject clemency.

“I do believe the sentence is just," said Carter, who also worked at the prison and was there the day her mother was killed. “He did kill her, and it had to be planned because you can't just go and find a shank. He had time to calm down and not carry out what he was going to do."

After the board's vote, Jernigan said in a statement: “Allowing Mr. Grant to be executed is a final injustice in this tragic case.”

“This was a just and appropriate sentence for the brutal murder of Gay Carter," O'Connor said in a statement. “This conviction and sentence was affirmed after years of thorough review by the appellate courts. My thoughts and prayers are with the family of Gay Carter.”