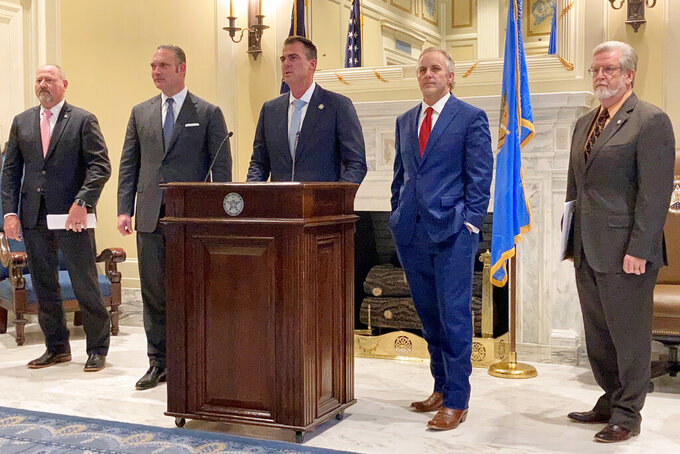 Under the deal, which is expected to be approved by the full House and Senate as early as next week, nearly all state agencies will be spared from cuts or will see increases in their annual appropriations.

Public schools will see an increase of $171.8 million, or nearly 6%, above the current year's funding levels, which is designed to trigger mandatory class-size reductions for kindergarten and first-grade classrooms. The proposal also sets aside more than $700 million for the state's savings account, bringing the total state reserves to more than $1 billion, a top priority for Stitt.

“I'm very, very pleased with how this budget came together," said Stitt, flanked by GOP leaders from the House and Senate. “It lowers taxes for every single Oklahoman."

“This is going to help us retain corporations here in Oklahoma and also attract new headquarters to the great state of Oklahoma," Stitt said.

The deal also restores the refundability of the earned income tax credit, which is designed to help low-income families.

While Democrats support the restoration of the earned income tax credit, they expressed skepticism about the plan to cut income taxes, noting a major budget shortfall just three years ago forced lawmakers to raise taxes on cigarettes, fuel and energy production to help balance the budget and boost teacher pay.

“When we’re out talking to Oklahomans, nobody’s asking for a tax cut for the wealthiest Oklahomans or a corporate tax cut," said House Minority Leader Rep. Emily Virgin, D-Norman. “They’re asking for investment in schools and health care, roads and bridges and other core services that we’ve never adequately funded."

State Superintendent of Public Instruction Joy Hofmeister said the $3.2 billion in funding for public schools is a record-high appropriation.

“After such a very challenging year in the wake of the pandemic, the budget agreement announced today is tremendous news for students, teachers and, in fact, all Oklahomans who benefit from a strong educational system,” Hofmeister said in a statement.

The plan also funds a voter-approved Medicaid expansion that is expected to cover 215,000 Oklahoma residents and cost the state about $164 million annually. Surplus revenue and additional funding from the federal government is expected to cover most of the costs for the first year, while a fee that hospitals pay is expected to gradually increase from 2.5% to 4% to help cover the costs in future years.

Friday's press conference reflected a much-improved relationship between Republican leaders and Stitt, who vetoed the Legislature's budget last year and forced a veto override by members of his own party.