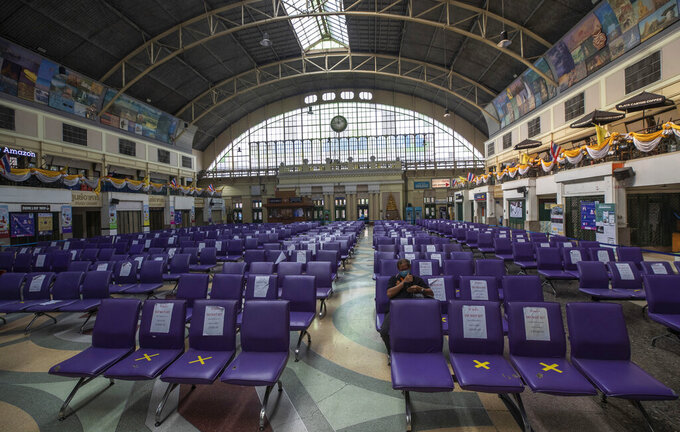 Sakchai Lalit, ASSOCIATED PRESS
FILE- In this April 14, 2020, file photo, a lone passenger wearing a face mask help curb the spread the coronavirus sits in spread out seating at the Hua Lamphong Railway Station in Bangkok, Thailand. Shortages of power, computer chips and other parts, soaring shipping costs and shutdowns of factories to battle the pandemic are taking a toll on Asian economies. (AP Photo/Sakchai Lalit, File)

Shortages of power, computer chips and other parts, soaring shipping costs and shutdowns of factories to battle the pandemic are taking a toll on Asian economies.

While business sentiment is improving in some parts of Asia as governments begin easing restrictions put in place to curb coronavirus infections, there is mounting evidence that such disruptions are slowing a return to business as usual.

A quarterly survey by the Bank of Japan released Friday showed sentiment among manufacturers at its highest level in nearly three years. The survey found companies plan to raise investment more than earlier forecast, but that shortages of components were disrupting production.

That dovetailed with data released Thursday that showed Japan’s factory output fell 3.2% in August from the month before. That followed a 1.5% decline in July.

Automakers and producers of IT products and other electrical machinery were the hardest hit.

Japan’s Suzuki Motor Corp. became the latest automaker to idle production lines for a few extra days due to shortfalls in components. Suzuki said in a statement that it expected to suspend operations at a factory in central Japan for an extra three days and to do the same two days at another factory.

While there are signs of improvement in some parts of Asia, “fresh peaks for new daily cases in some countries and relatively slow progress in vaccination rollouts in Southeast Asia mean the risks of semiconductor and other component shortages could persist for an extended period,” Harumi Taguchi of IHS Markit said in a commentary.

Japan's retail sales fell a much worse than expected 4.1% in August from a month earlier due to weak demand for clothing and appliances.

The manufacturing purchasing managers index, or PMI, fell to 49.6 in September from 50.1 in August on a 0-100 scale where 50 marks the break between expansion and contraction.

The survey was conducted before power shortages began causing factories in some parts of China to begin suspending operations.

The weakest readings were in energy intensive areas such as chemicals and metals, Julian Evans-Pritchard of Capital Economics said in a report.

“Respondents to the surveys noted that material shortages and transportation delays were still holding back output," he said.

Surging demand for computers and other equipment for remote work has strained supplies of the microchips that run them.

Shortages of shipping containers and occasional shutdowns of ports due to COVID-19 outbreaks also have caused bottlenecks throughout global supply chains.

“Chinese and South-east Asian ports are still suffering the consequences of those earlier closures, with record queues of ships waiting to unload," Rabobank said in a report on the shipping industry.

It estimated that 10% of global container capacity was waiting offshore for unloading.