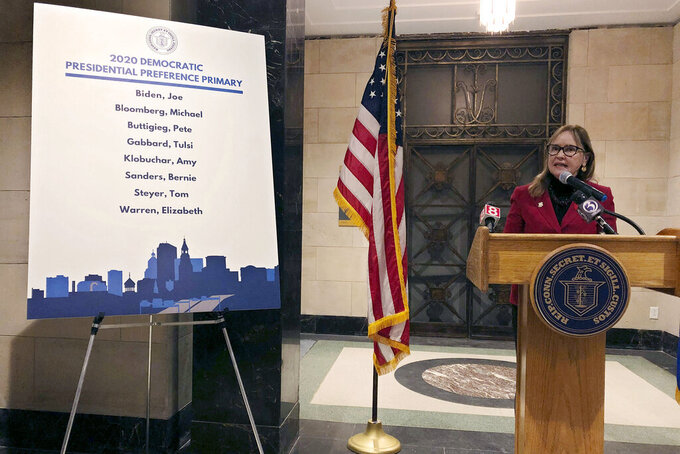 Sue Haigh, ASSOCIATED PRESS
FILE - Connecticut Secretary of the State Denise Merrill announces the names of Democratic candidates who will appear on the state's presidential primary ballots on April 28, during a news conference in Hartford, Conn., Feb. 14, 2020. Merrill will leave office six months before her third term ends, telling The Associated Press she is resigning Thursday, June 30, 2022, effective at noon, to spend more time with her husband, who is facing serious health problems. (AP Photo/Sue Haigh, File)

HARTFORD, Conn. (AP) — Connecticut Secretary of the State Denise Merrill will leave office six months before her third term ends, telling The Associated Press she is resigning Thursday, effective at noon, to spend more time with her husband, who is facing serious health problems.

The veteran Democrat, who was first elected as the state's top elections official in 2010 after serving 17 years in the Connecticut General Assembly, said that it was a hard decision, considering this is an election year, and that she feels responsible for making sure it runs smoothly. However, Merrill, 73, said she can no longer juggle the job and helping care for her husband.

“It's too much for me. I can't do both, and I have to be at home,” she said during an interview Tuesday in her office, where she was packing up old photos of her days in the legislature. “I don't have full-time caretakers, and it wouldn't work, anyway. He's very dependent on me, and I'm dependent on him in a lot of ways.”

Merrill's husband, Dr. Stephen Leach, 78, has been living with Parkinson's disease for years and has been dealing with various health setbacks more recently, she said.

The two, who live in Storrs, have been a couple for about two decades. Merrill recalled Tuesday how her husband would patiently sit in the gallery of the House of Representatives until late into the night when she was a state representative, waiting to drive her home after debate would finally wrap up.

“He was such a supporter,” she said. “The least I can do is support him back. That's how I feel about it.”

Merrill announced about a year ago that she would not be seeking a fourth term, saying it was time for a “new generation” to “step up” with new ideas on how to further modernize voting and protect voters’ rights. But since then, she's been grappling with how to finish out her term, given her husband's changing medical condition.

“I've been thinking about this for months and trying to figure out if I can manage it,” said Merrill, who has spoken multiple times with Democratic Gov. Ned Lamont about her family's situation.

“He's been terrific, and he gets it," Merrill said. “Family first.”

Merrill plans to make a public announcement about her resignation Wednesday. It will then be up to Lamont, who faces reelection in November, to select her replacement since the General Assembly is not currently in session. Lamont's office said the governor will announce an appointment soon.

“Denise Merrill is a dear friend to me, and her exit from public service is a tremendous loss for the people of Connecticut,” Lamont said in a written statement, crediting her with becoming “one of the most respected secretaries of state in the country" and lauding her efforts to boost election participation.

“Denise has delivered results, and our state is stronger because of her efforts,” he said. "My prayers are with her and her family, and I thank her for everything she has given to Connecticut.”

While Scott Bates currently serves as deputy secretary of the state, a job he has held since January 2017, there is no requirement that Lamont choose him. Bates, a former senior adviser with a nongovernmental organization that works on political party development and good governance issues worldwide, is also a former chair of the Connecticut Port Authority.

“I'm sure that whoever the governor appoints, we'll be in good hands,” she said, noting that “elections are strong” in Connecticut.

She listed the numerous initiatives her office and the General Assembly have taken over over the years to beef up digital security, train and certify local election officials, fully staff the office, and take steps to make it easier for people to vote, including the implementation of online voter registration, Election Day registration, automatic voter registration through the motor vehicles department, dropboxes for absentee ballots, and a ballot tracking system.

Merrill, a former president of the National Association of Secretaries of State, is leaving office at a time when secretaries of state and election clerks across the country have had to deal with death threats, harassment and unfounded accusations of fraud. While Merrill has received some public criticism from Republicans at times, she said it pales in comparison to what her colleagues are experiencing in other states.

“I always make the point that Connecticut has great elections. We're doing a wonderful job — 2020 was the best election I can remember, even in the face of COVID and all the changes we had to make," she said. "So I think that has helped people feel like, 'Oh, in Connecticut, we're pretty good. Maybe those other states are having trouble.'”