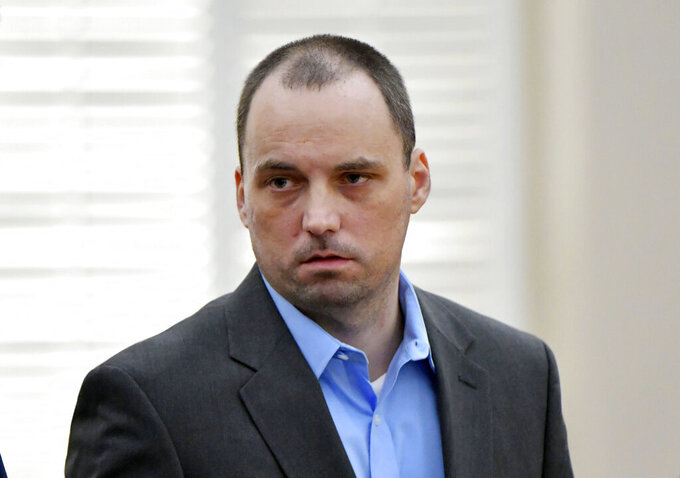 Hyosub Shin, ASSOCIATED PRESS
FILE - Ryan Alexander Duke appears during motion hearings before Chief Judge of the Tifton Circuit Bill Reinhardt at Irwin County Courthouse in Ocilla, Ga., on Monday, Nov. 26, 2018. Duke, charged with murdering a popular high school teacher who vanished in 2005, went on trial Monday, May 9, 2022, with prosecutors and defense attorneys clashing over whether the jury should believe the defendant's confession to investigators. (Hyosub Shin/Atlanta Journal-Constitution via AP, File)

OCILLA, Ga. (AP) — The trial of a man charged with murdering a popular high school teacher who vanished in from her rural Georgia hometown in 2005 closed Thursday with prosecutors and defense attorneys clashing over they key piece of evidence: the defendant's recorded confession.

Ryan Duke faces an automatic sentence of life in prison if he's convicted of murder in the death of Tara Grinstead. The high school teacher's disappearance in rural Irwin County remained a mystery for more than a decade until Duke confessed to investigators in 2017.

Duke's DNA was also found on a latex glove found in Grinstead's yard. District Attorney Brad Rigby told the jury in his closing argument Thursday that “the truth is exactly what came out of his mouth.”

Duke told Georgia Bureau of Investigation agents that he broke into Grinstead's home in October 2005 looking to steal money for drugs. He said he was surprised when Grinstead came up behind him, and he fatally struck her.

Duke later led investigators to a pecan orchard where Duke said he and a friend burned her body to ash. GBI agents testified that Duke knew details about the case that had never been made public.

Duke's defense attorney, John Merchant, told jurors the real killer was Duke's friend and accomplice, Bo Dukes. He was convicted in a separate trial in 2019 of helping remove Grinstead's body and burn it. But Dukes was never charged with murder.

Duke testified that he gave a false confession and that Dukes had woken him at the mobile home they shared in 2005 to say he had killed Grinstead, then showed that he had her purse and wallet. Duke said on the witness stand that he did not tell investigators the truth because Dukes had already committed one killing and he was afraid.

“Bo Dukes should be sitting in that chair, not Ryan,” Merchant told the jury in his closing argument.

The murder trial opened last week more than 16 years after Grinstead was last seen leaving an evening cookout in rural south Georgia. Grinstead, who taught history and was a former beauty queen, was just 30 when she disappeared.

Before Duke’s confession, her family held out hope that she might return home safe.

Though her body was never recovered, investigators matched Grinstead's DNA to bone fragments recovered in the area where Duke told investigators he and his friend had cremated her.