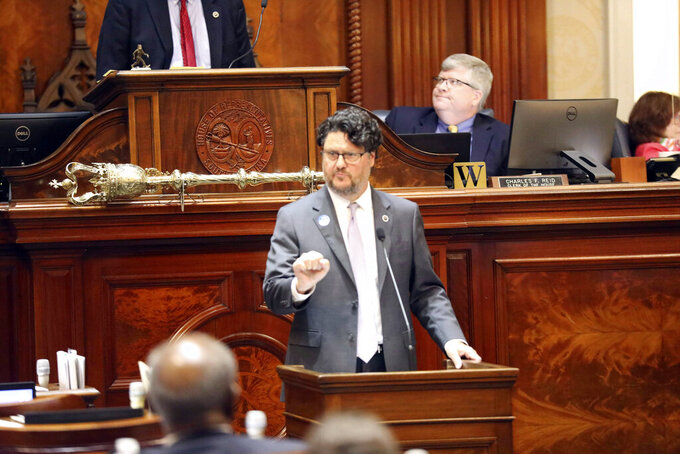 COLUMBIA, S.C. (AP) — The South Carolina General Assembly overturned many of Gov. Henry McMasters budget vetoes Tuesday, but they did agree with the biggest one, taking $25 million out of the $13.8 billion spending plan to try to help bring a super computer to Columbia.

The money was set aside for what supporters called a quantum computing operation and set up a nonprofit to rent time on the machine to researchers and others.

It needed one-time money from the budget because the terms of the deal expired at the end of June, supporters said.

But only 28 of the 105 House members voting chose to override the veto, falling well short of the two-thirds needed to overcome McMaster's veto.

The governor in his veto message called the item a dangerous precedent to avoid state procurement laws and setting up the nonprofit should be done with a separate bill that goes through the regular legislative process.

McMaster issued 73 vetoes. taking about $53 million from from the nearly $14 billion budget set to start July 1.

Twenty-nine of the vetoes had no money attached after legislative budget negotiators couldn't agree on how much to spend.

Of the other ones, the General Assembly put 26 items worth about $20 million back into the budget. They allowed to stand the governor's decision to remove 17 of the items, including the computer, worth about $33 million.

All the money went toward items put in by lawmakers for local concerns. Items giving $7 million for a cultural welcome center in Orangeburg, $500,000 to build a museum to honor the high school football coach with the most wins in the country at Summerville High School and $5 million for a park in Myrtle Beach stayed in the budget.

Along with the computer, $2 million was pulled out of the budget for a community center in Orangeburg County and $364,000 for improvements to a Saluda County park.

More than 100 protestors, many of them calling for South Carolina lawmakers to roll back new abortion restrictions that became law after last week's U.S. Supreme Court ruling, filled the lobby between the House and Senate, chanting before security asked them to continue the demonstration outside.

The state’s $13.8 billion budget for the fiscal year 2022-23 sets aside $1 billion to send hundreds of dollars of rebates to many South Carolina taxpayers. It also spends $600 million to cut the state’s top income tax rate from 7% to 6.5% and combine other rates to 3%. Lawmakers eventually plan to cut the top rate to 6%.

The spending plan also raises the minimum salary for teachers from $36,000 to $40,000, puts $1 billion extra into road repair and expansion and gives state employees a 3% raise and $1,500 bonus. The budget also raises a number of state law enforcement salaries and sets aside about $1 billion in case this is the year the economy craters.

McMaster praised lawmakers for most of the budget and thanked them for putting more than 250 of his proposals into the final spending plan.