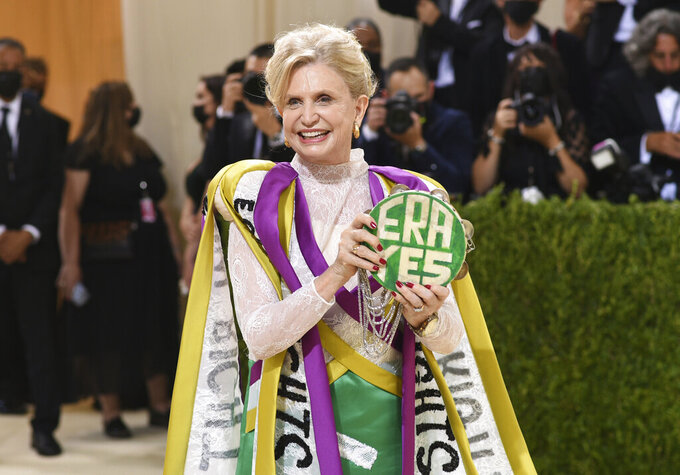 Evan Agostini, Invision
FILE - Congresswoman Carolyn B. Maloney attends The Metropolitan Museum of Art's Costume Institute benefit gala celebrating the opening of the "In America: A Lexicon of Fashion" exhibition on Monday, Sept. 13, 2021, in New York. Maloney, a New York Democrat whose 30-year career in Congress is about to end after she lost a bruising primary, is under investigation by the House Ethics Committee for soliciting a coveted ticket to the 2016 Met Gala.(Photo by Evan Agostini/Invision/AP, File) 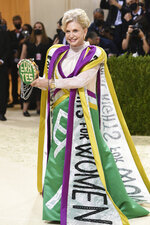 NEW YORK (AP) — U.S. Rep. Carolyn Maloney, a New York Democrat whose 30-year career in Congress is about to end after she lost a contentious primary, is under investigation by the House Ethics Committee for possibly soliciting a ticket to the annual gala of the Metropolitan Museum's Costume Institute.

Investigators for the committee said Maloney called the museum's president in 2016 when she learned she had not been invited to that year's Met Gala, a fundraiser for the Costume Institute where prominent New Yorkers rub shoulders with Hollywood stars.

“I received a call this past week from Carolyn,” Emily Rafferty, the Met's former president, wrote in a email to the museum's director. “She is unhappy to say the least that she is not receiving an invitation to the Party of the Year.” Rafferty said Maloney “went on about how much she does for the Met, always responsive when you call, and proactive re the institution's needs in DC."

It is not against House ethics rules to accept a free ticket to a charity event, but it is against the rules to ask for one. “If Rep. Maloney solicited or accepted impermissible gifts, then she may have violated House rules, standards of conduct and federal law,” the board of the Office of Congressional Ethics wrote in the report released Monday.

Maloney told investigators she did recall the phone call to Rafferty. A spokesperson for Maloney, Adrien Lesser, said the lawmaker "is confident that the House Ethics Committee will dismiss this matter. Although the Committee has not made any determination a violation occurred, she is disappointed by the unproven and disputed allegations in the report issued by Office of Congressional Ethics and strongly disagrees with its referral."

Maloney did end up attending the Met Gala in 2016 and in subsequent years including in 2019 when she wore a firefighter's jacket to agitate for Sept. 11-related health benefits and in 2021 when her dress promoted the Equal Rights Amendment.

Because she is retiring from Congress, it is unlikely that Maloney will face any punishment for asking about her 2016 invitation.

Her spokesperson said that the 76-year-old Maloney will “continue to support the arts and humanities in New York City and around the country” as a private citizen.