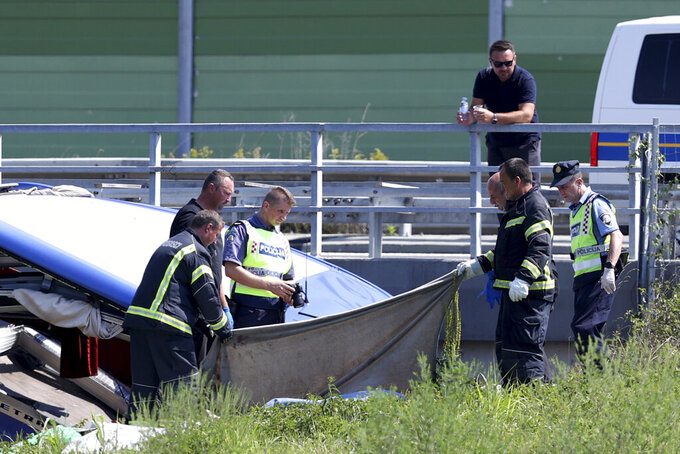 Uncredited, ASSOCIATED PRESS
Rescuers remove a body from the wreckage of a bus at the crash scene in Podvorec, near Zagreb, Croatia, Saturday, Aug. 6, 2022. A bus with Polish license plates has skidded from a highway in northern Croatia, and police say more than 10 people were killed. Croatia’s state HRT television reported that several more people were injured, many seriously. (AP Photo)

WARSAW, Poland (AP) — Polish authorities were working Monday to repatriate injured passengers aboard a bus that crashed on the weekend in Croatia, killing 12 people as it ferried Polish pilgrims to a popular Catholic shrine.

The bus with 44 passengers aboard veered off a motorway north of Zagreb in the early hours of Saturday. The accident left 32 passengers injured, some of whom are in critical or serious condition.

An investigation is underway to determine the cause of the crash. The driver was among those killed according to a Croatian official quoted by Polish broadcaster TVN24. Some early reports suggested the driver that Polish media said was 72 might have fallen asleep at the wheel, but this hasn't been confirmed.

Polish police officers, who were in Croatia already to help with the large numbers of Polish tourists visiting Croatia's popular Adriatic coast, were redeployed to support Croatian emergency workers helping the injured.

The bus was taking pilgrims to the Catholic shrine in Medjugorje, a town in southern Bosnia. The shrine is Europe’s third-most popular pilgrimage destination after Lourdes and Fatima.

Pope Francis expressed his sorrow on Sunday and offered prayers for the victims.

A Health Ministry spokesman, Wojciech Andrusiewicz, said three of the injured were due to be brought home either Tuesday or Wednesday and that another 10 people with injuries of various degrees of severity would be airlifted later.

Currently, 28 people remain hospitalized in Croatia, including 17 severely injured and two in critical condition, according to the Polish health ministry.