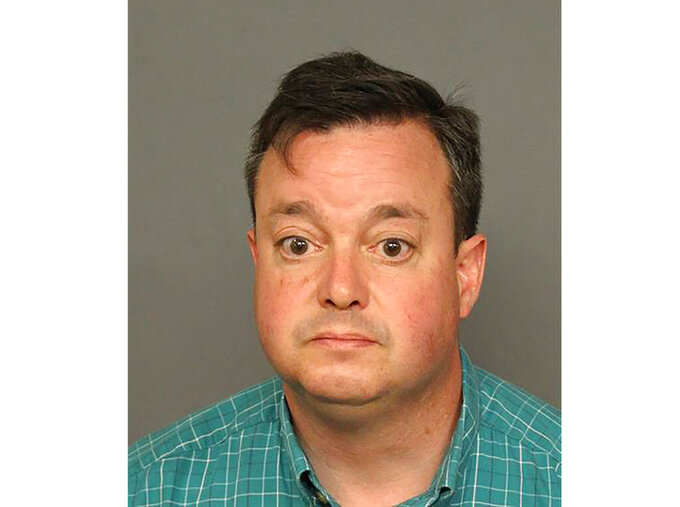 Uncredited, ASSOCIATED PRESS
This undated photo provided by the Denver District Attorney's Office shows Colorado State Patrol trooper Jay Hemphill. Hemphill has been charged with felony menacing for allegedly pointing a gun at a driver who was turning near him as he crossed a street near the state Capitol in August. 2021. Hemphill has been placed on leave from his job at the unit that provides security for the governor and the Capitol. In 2007, Hemphill was honored by the patrol for shooting and killing an armed man outside the office of then Governor Bill Ritter. (Denver District Attorney's Office via AP) 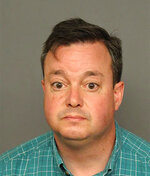 DENVER (AP) — A Colorado state trooper honored for shooting and killing an armed man outside the governor's office over a decade ago has been charged with felony menacing and accused of pointing a gun at a driver near the state Capitol, prosecutors said Friday.

Jay Hemphill, who was still assigned to the unit that provides security for the governor and the state Capitol before being placed on leave because of the allegation, is accused of yelling and pointing his gun at the woman, who was making a right turn onto a street he was crossing on Aug. 25, an arrest affidavit said. Hemphill reported the incident, which was captured on video, to a patrol sergeant shortly after it occurred, the document said.

The woman, whose name was not released, told police that she freaked out when she saw the gun, saying, “I was afraid I was going to get shot," according to the document.

Court records did not list any attorney as representing Hemphill.

In a written statement, a spokesperson for Gov. Jared Polis, Conor Cahill, noted both the State Patrol’s values and Hemphill’s service.

“Our State Patrol has the core values of honor, duty, and respect and they hold those values very high. They understand the need to ensure there is trust and confidence in law enforcement. Mr. Hemphill has dedicated his life to public service and protecting Coloradans,” Cahill said, declining to comment on the investigation itself.

In 2007, Hemphill shot and killed Aaron Synder after he walked into the reception area of the then-Gov. Bill Ritter’s office dressed in a tuxedo and declared that he was the emperor of the state and there to take over.

Hemphill talked to him and got him to step out of the office but shot him after Snyder drew back his jacket to show a large gun in his pocket, according to a summary of the shooting investigation. Hemphill tried to step back but Snyder advanced toward him as he warned, “Stop ... State Patrol … or I will kill you,” it said.

The shooting was found to be necessary and legally justified by the Denver District Attorney's Office. Hemphill received the state patrol’s Medal of Valor for his actions.