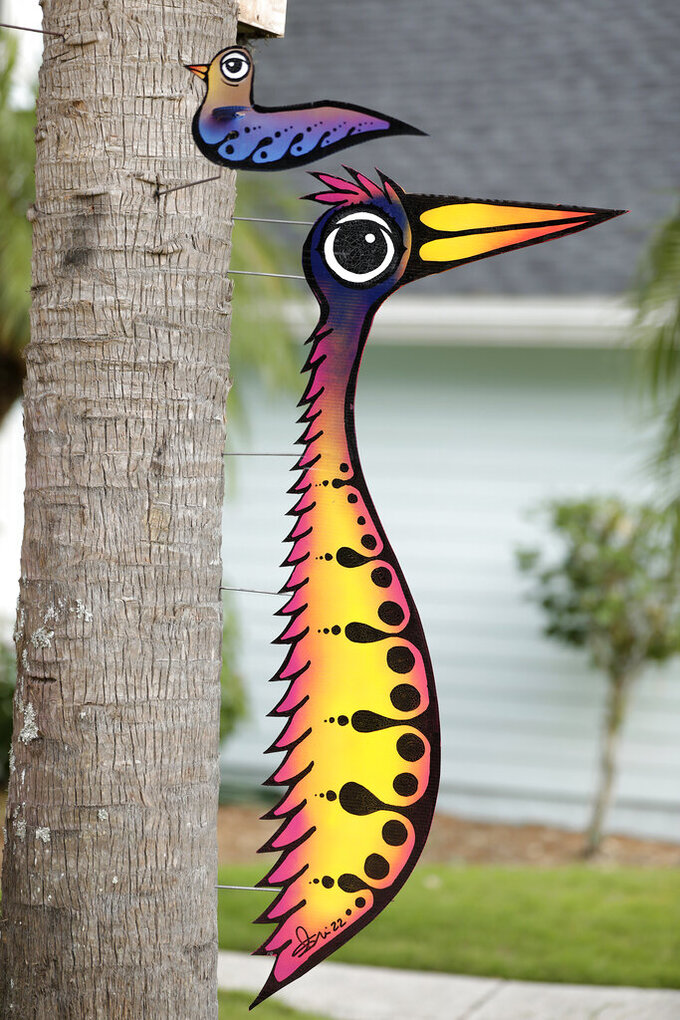 Bob Self, ASSOCIATED PRESS
A pair of artist Scotie Cousin's colorful birds on a palm tree near his home in Atlantic Beach, Fla., Thursday, June 30, 2022. In addition to his home, his whimsical artwork is often installed randomly around the beaches for the public to enjoy. (Bob Self/The Florida Times-Union via AP)

ATLANTIC BEACH, Fla. (AP) — Scotie Cousin kicks back in the garage/workshop of his Atlantic Beach home surrounded by some of his creations. His whimsical work is often installed randomly and anonymously around the beaches for the public to enjoy.

In early 2020 the nation was uptight, divided and slowly learning of a virus in different pockets of the globe, a mysterious thing that seemed to be creeping ever closer. It was tense.

Standing in line at a Publix in Jacksonville, artist Scotie Cousin could see it all around him. People were grouchy, hunched over, guarded. They were just being awful to each other.

They were in pain, he knew, and that made Cousin — who’s been in pain for most of his life — feel so sad.

Driving home, he looked at the palm trees in the median of Atlantic Boulevard. He smiled. He knew exactly what he needed to do.

Once home, he left the groceries in the car and rushed into his garage, cutting a piece of recycled plastic into the shape of a fanciful gecko. He painted the critter green and black, with purple flowers for its hair.

Two hours later, groceries spoiling in the car, he was back at the palm trees, now wearing an orange shirt and white hardhat, carrying a ladder, looking all official. He made his way into the median, climbed up a tree and attached the gecko by wire to the trunk.

It was rush hour, and cars were crawling. Cousin went back across the road and just sat there, watching how people reacted. He was rewarded: He saw dour motorists break into smiles, saw kids roll down windows and point in excitement.

He stayed there for a while. His groceries could wait some more.

That was his first critter — that’s what he calls them — and it was doing just what he wanted it to do. It made people smile and laugh.

Since then have come many critters: whimsical, smiling birds, dragons, owls, space aliens, cats, crabs and more, placed by Cousin on trees and in fields, at schools and at hospitals, at intersections and along busy roadsides.

Cousin has done all manner of art, in a variety of mediums, and some of it decorates his home in Atlantic Beach. But there’s something about these bright, happy critters ...

He hears about them all the time on email and on his Instagram and Facebook, messages of support and thanks.

People are lining up to buy their own critters, online at cousinartcritters.com, in person and at the Atlantic Beach Arts Market on Mayport Road.

He and a business partner are gearing up to mass-produce them to sell cheaper and wider.

“Here’s the magic part about it,” Cousin said. “It’s drawing people in, and they’re making their own story about them.”

He says it again: People need this kind of thing in their lives. Not necessarily one of his critters, but what they represent: happiness, whimsicality. What he calls, “that wonderment we had as kids.”

One time he went back to Atlantic Boulevard, near where he placed the original critter in the tree, and put another lizard there. This one was in the grass, smiling, and there was a quote bubble coming out of his mouth with a message, in block letters, that we all could use.

“YOU’RE GOING TO BE JUST FINE.”

Cousin, who turns 59 in late July, grew up in Cypress, Texas, west of Houston, on a little farm with two brothers, eight horses, 200 chickens, two pigs and a goat.

He was Scott then; he took on Scotie (pronounced like Scottie) later, part of a new identity that felt more like himself.

As Scott, he played football, running back and linebacker (“I was a very mean linebacker”) at Cypress schools. He played percussion in the school band, and his parents encouraged his musical talents, which grew to include saxophone and bass and guitar.

But he was lonely, without friends, keenly aware that he was different from others in Cypress, which was real country back then: cowboy hats, rodeos, country music.

He got some clues as to his identity, though, one hot summer day in 1974 when he was walking by himself down Cypress Creek past its tall banks of wet red clay.

An idea began forming, and he went to work on the clay, molding it into abstract shapes, like tubes or dreadlocks, interconnecting them until the whole thing stretched out for 20 feet. He stayed there for hours, turning red in the heat. At sunset he just sat back in satisfaction and admired it.

He’s not sure what motivated him to do it, he said. “It just organically hit me, almost like from another world.”

Looking back, he figures that was his first art installation. He never told anyone about it, never showed it to anyone. But he knew this was his path forward.

Cousin went to McNeese State University in Louisiana on a drum scholarship, playing in the marching band and coming into his own as an artist. He got his first paid gig illustrating the school yearbook. Later he lived in Atlanta with his own mosaic tile business, doing art in the day and playing at clubs in a band named Groove Snafu.

That’s where he met his wife-to-be Laura, who, after some ups and downs, invited him to Chicago, where she had moved. He followed, and some unofficial art installations followed: giant chalk murals on the sidewalk outside their apartment, a leafless tree that bloomed with dozens of red clown noses that he’d found in the trash.

He and Laura married 17 years ago. But life was often hard.

From the time Cousin was 18, his body was being wracked by an autoimmune disease that attacked his cartilage, his skin, his teeth. He’s gone through more than 30 operations, he said, and became dependent on the opioids doctors prescribed.

He kept making art though, even if — after back fusion surgery — he had to lie on the concrete to paint his giant sidewalk murals.

The medicines were killing him, he knew, but nothing seemed to work until the couple moved to Jacksonville in 2013 so he could go through a chronic pain program at Mayo Clinic. It worked, he said, and he was able to get off drugs. Withdrawal from opiates was brutal, but he’s helped by stretching, exercise, meditation and mental changes in how he thinks of his pain.

This lifelong ordeal is terrible. But he figures he wouldn’t be the same person if he hadn’t gone through it. It’s given him a sense of how precious is each day.

His philosophy is simple: “Every day is an endless possibility, I hit my feet and say, ‘Thank you, Lord.’”

In conversation, Cousin, who often wears a straight-brimmed baseball cap and shades, is gregarious, open, self-deprecating and endlessly enthusiastic.

He’s crazy about his adopted hometown of Atlantic Beach, where many of his critter creations can be found. He rides around it on a beach cruiser bicycle he’s fitted with a small engine and plywood decorative wings of a sort. And he sings in the choir at St. John the Baptist Catholic on Mayport Road, where he finds spiritual nourishment and community.

“My religion is what I do in the community to make it better,” he said. “If you want to label it as something, it’s doing something for the community I want to live in. That’s my religion.”

Brandy DiVita was with her daughter Morgan, taking her to yet another hospital appointment when she saw this stranger in the front yard of her Neptune Beach house. But then Morgan’s face broke into a big smile at the sight of the brightly colored critters he was putting up on the lawn.

It was Scotie Cousin, who had asked around: Is there someone suffering who I might be able to help?

That led him to Morgan, who was 11 on Feb. 9, 2021, when she was diagnosed with an inoperable brain tumor. “The lifespan after diagnosis is six to nine months,” said her mother, “and she fought it for eight months.”

(DiVita is organizing a 5K run this Sept. 17 to raise funds for families going through a similar situation. Go to runsignup.com and search “MorganStrong.”)

DiVita said Cousin was a constant friend throughout, for her and her only child. He brought Morgan more critters, talked and joked with her, wrote her a song and went to her funeral. He donated works of art to a fundraiser and persuaded other artists to do the same.

“He went from being a stranger to a really good friend. He has been with us, me and Morgan, throughout our entire fight,” DiVita said. “Even after her passing he’s still here.”

In gratitude, she bought him an engraved brick that’s in the sidewalk in front of Poe’s Tavern in Atlantic Beach. It says: “Scotie Cousin Local Hero.”

That’s what he is, DiVita said. “We need about a thousand more Scotie Cousins in this world.”

Cousin is always on. He’s always thinking, creating, improving. His wife explained how his mind works.

“Groceries in the car,” Scotie chuckled.

“Bombs could be exploding in the backyard. And I’d be like, ‘Honey, help!’”

But if he’s working on something at that time, she knows his reaction.

Consider the time at Trader Joe’s in Chicago, when he heard the cash register ringing up item after item with that insistent beep beep beep. He went to management. “Instead of that beep, how about you put a different bird noise on every one of them?” he asked them. “You’d just hear the birds chirping.”

They looked at him kind of puzzled at first, then nodded in agreement: That could be nice. As far as he knows though, there are still no birdsongs at that market.

Cousin sees art everywhere. There’s so much of it: in the limbs of a tree, in recycled plastic, in a pile of stuff that someone’s thrown away.

He can see the finished work of art already. It’s just up to him to make it real.

“As much time as the good Lord gives me on this Earth, I’m going to frickin’ squeeze every bit out of that lemon,” he said. “There’s just not enough time. I feel like I’m running out of time.”

“I’m not running out of time because I’m dying or anything,” he explained. “I just know there’s not enough time in one lifetime to do what I want to do.”