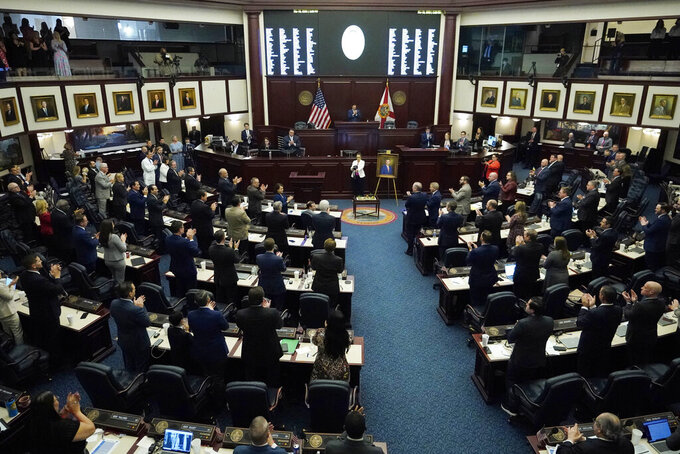 Wilfredo Lee, ASSOCIATED PRESS
FILE - Members of the Florida House of Representatives give Speaker of the House Chris Sprowls a standing ovation after Sprowls gave his farewell speech and had his official portrait unveiled during a legislative session at the Florida State Capitol, Thursday, March 10, 2022, in Tallahassee, Fla. Florida lawmakers are returning to the Capitol next week for a special legislative session aimed at addressing problems in the state’s turbulent property insurance market, a persistent and multifaceted crisis in a region vulnerable to damaging hurricanes.(AP Photo/Wilfredo Lee, File)

Four bills filed late Friday in the state House and Senate would create a new fund in which insurers can purchase insurance to help insulate them from risk. The bills also would allow homeowners with roofs 15 years or older to get an inspection of their condition before insurers deny them coverage. If an inspection shows that a roof has at least five years of life remaining, insurers can't refuse to issue a policy only based on the roof's age under the proposed legislation.

If a roof is more than 25% damaged but already complies with the state's 2007 building code, it would only have to be repaired instead of replaced under an exemption to the building code that the proposed legislation creates. One of the measures also would provide grants worth up to $10,000 each to retrofit homes so they are less vulnerable to hurricane damage. To qualify, properties would have to have insured values of $500,000 or less, be homesteaded, constructed before 2008 and located in areas where wind speeds from storms can exceed 140 miles per hour (225 kilometers per hours). Homeowners would get $2 from the state for every $1 they invested in mitigation efforts.

Under the proposals, some insurers would be required to get coverage from the new Reinsurance to Assist Policyholders program operated by the State Board of Administration.

In a proclamation calling lawmakers back to Tallahassee in the upcoming week, Republican Gov. Ron DeSantis highlighted several issues that have contributed to rising insurance rates in the state, including high rates of insurance litigation that drive up premiums and massive underwriting losses for insurance companies that have resulted in insolvency or canceled policies, among other things.

Florida Chief Financial Officer Jimmy Patronis, said in an interview that the state last year accounted for 9% of all claims filed nationally but nearly 80% of all the property insurance lawsuits.

The bills would allow for more state oversight so regulators can spot trends, analyze reasons and try to prevent the future failure of insurers. They also would limit attorney fee awards in court cases involving insurance claims assigned to third-party contractors and ban attorneys' fees from being transferred in property insurance litigation.

Under the proposals, insurers can require a separate roof deductible as long as it doesn't exceed 2% of the dwelling limits in the policy or half of the roof replacement costs. Policyholders must be able to opt-out of that, if they want, according to the bill.