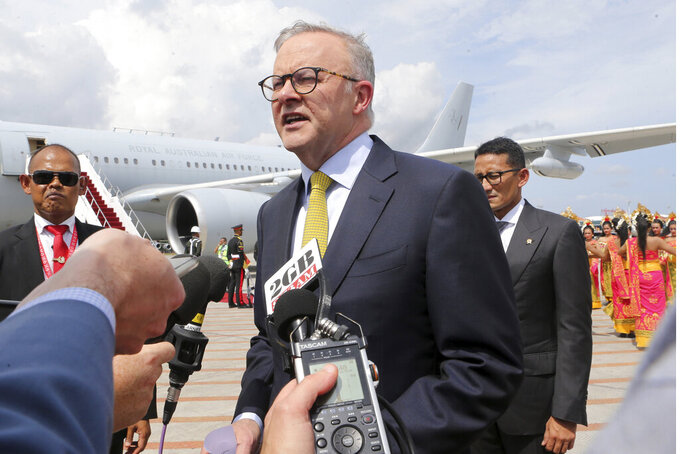 Albanese said he would meet Xi on Tuesday on the Indonesian island of Bali on the sidelines of the G-20 summit.

Albanese did not answer directly when asked by a reporter in Bali how hopeful he was that the meeting would lead to China changing a series of official and unofficial trade barriers that are costing Australian exporters $13 billion a year.

The meeting marks a major reset in a bilateral relationship that plumbed new depths under the nine-year rule of Australia’s previous conservative government.

A Chinese Foreign Ministry spokesperson said that improved ties would serve the fundamental interests of both countries, but did not confirm the meeting.

“We hope Australia will ... rebuild mutual trust and push the bilateral relationship back on the right track,” Mao Ning said at a daily briefing in Beijing.

The last Australian prime minister Xi met was Malcolm Turnbull on the sidelines of the G-20 summit in Hamburg, Germany, in June 2017.

Relations worsened under Turnbull’s successor Scott Morrison, when his administration called for an independent inquiry into the origins of and international responses to the COVID-19 pandemic.

The Xi meeting was confirmed after Albanese spoke briefly on Saturday with China’s Premier Li Keqiang at a dinner in Cambodia.

Asked about Li’s comment, Albanese said on Monday: “Australia will put forward our own position.”