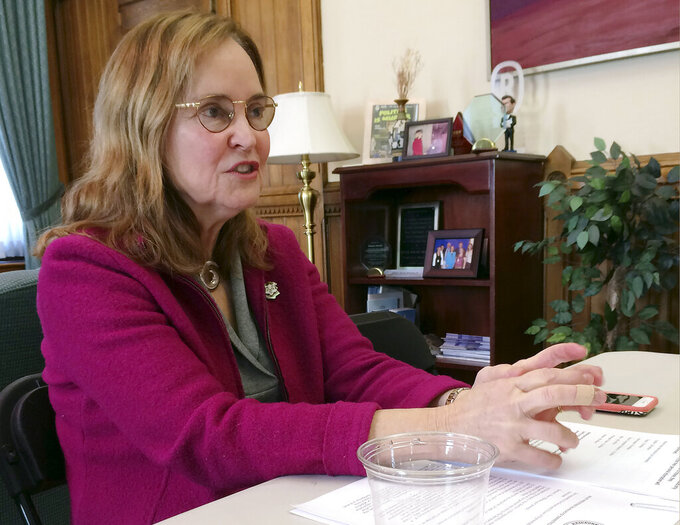 Susan Haigh, ASSOCIATED PRESS
FILE — Connecticut Secretary of the State Denise Merrill, a Democrat, meets with reporters in her state Capitol office in Hartford, Conn., Feb. 14, 2018. Merrill has resigned to care for her husband, Gov. Ned Lamont announced Thursday, June 30, 2022. Mark Kohler, of North Haven, Conn., will take office July 11, 2022, and serve until January, when the next secretary of the state will be sworn in following the November election. (AP Photo/Susan Haigh, File)

HARTFORD, Conn. (AP) — A retired official from the state attorney general's office will serve as Connecticut's secretary of the state for the next six months, completing the term of Denise Merrill following her resignation to care for her husband, Gov. Ned Lamont announced Thursday.

Mark Kohler, of North Haven, will take office July 11 and serve until January, when the next secretary of the state will be sworn in following the November election.

Merrill, a Democrat, announced this week that she will resign at noon Thursday to spend more time with her husband, Stephen Leach, 78, who has been living with Parkinson's disease for years and has been dealing with recent health setbacks. Merrill served as the state's top elections official since 2011.

Kohler was as an associate attorney general for 30 years until his retirement earlier this year. From 2011 to 2021, he was the head of the Special Litigation Department, which represents state constitutional officers, the legislature and the judiciary in legal matters.

Lamont, a Democrat, said in a statement that he was appointing Kohler because of his leadership experience in the attorney general's office and knowledge of election laws. The governor also said it was important to appoint someone with no interest in running for secretary of state, to “ensure that this short-term appointment be clear of politics.”

Kohler said he was honored and humbled by the appointment.

“I have the utmost respect, appreciation, and admiration for the work Denise Merrill accomplished in this role,” he said in a statement, “and I look forward to working with her dedicated team of professionals to ensure that our elections are carried out in an accessible, fair, and transparent manner.”